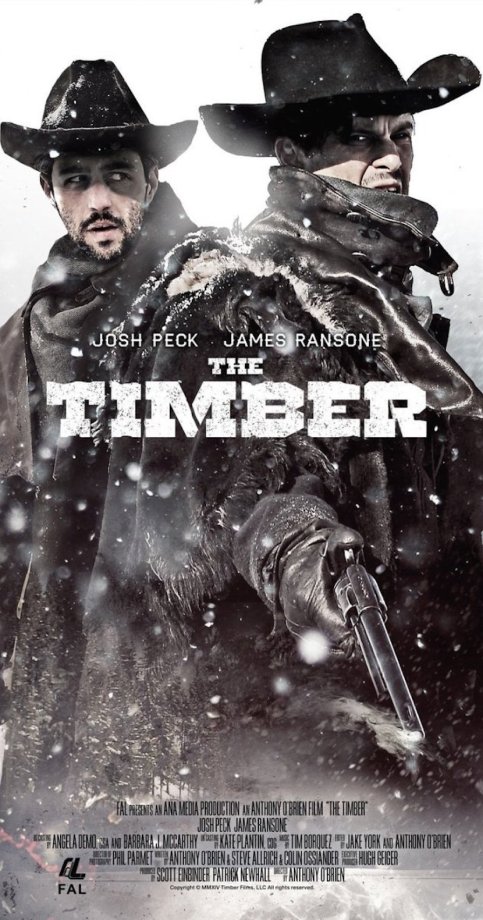 1898, the Yukon Territory. Brothers Wyatt (Ransone) and Samuel (Peck), along with their mother Maggie (Kennedy) and Samuel’s wife, Lisa (Lasowski) and their newborn son, are struggling to keep their property from being foreclosed by local businessman and bank owner George Howell (Glover). When Howell tells Wyatt that their debt will be paid if he tracks down and captures the brothers’ father, Jebediah (Gaunt), he has no choice but to accept. Samuel goes with him, much to the dismay of Lisa who is fearful they won’t return.

As they set out, Howell insists they’re accompanied by Colonel Rupert Thomas (Caven), a seasoned army man who knows the area they’re travelling into, the Timber. As they make their way up into the mountains to the mining camp where their father was last known to be, the town sheriff, Snow (Bailie) visits Maggie and Lisa to make sure they’re alright. While he’s there, two of Howell’s men arrive to begin assessing the property, but before it’s legal to do so; Snow runs them off.

Heading deeper into the Timber, an accident with their horses and wagon leaves the three men having to travel on on foot. The next morning they’re attacked by a couple of mountain men and Thomas is killed. Wyatt and Samuel press on, struggling against the harsh elements and a further assault that sees Samuel captured and taken to a cave where his left hand is badly injured. Wyatt rescues him and they continue on up the mountain until they reach the mining camp. But madness has overtaken the men working there, and the foreman, Jim Broadswell (O’Hagan) has them locked up. When some of the workers use dynamite to blow up the camp, the brothers manage to escape, taking Broadswell with them.

Their father, however, intercepts them, killing Broadswell and wounding Wyatt. Unable to do anything, Samuel passes out and he and his brother are taken to a small Indian encampment where Samuel wakes to find that Jebediah has amputated his injured hand. With their father clearly out of his mind and intending to murder Wyatt, Samuel has to find the strength to save his brother, while back at their home, Howell and three of his men arrive to take the property by force if they have to.

Shot in the stunningly beautiful Carpathian Mountains, The Timber is a Western that features an odd editing style, and the kind of elliptical narrative that could well alienate audiences expecting a more straightforward plot or storyline. It’s a bold move on the makers’ part and while it does add to the overall, nightmarish quality of the brothers’ journey, there are also times when it proves frustrating. Scenes appear disjointed, and the movie is peppered with flashbacks and Samuel’s musings on the events that take place and his own mental state. It’s not a conventional approach by any means, but in the hands of screenwriters O’Brien, Steve Allrich and Colin Ossiander, it does make for an absorbing, though unpredictable viewing experience.

That said, there are enough genre conventions to help the wary viewer along. Howell is the devious land baron, Samuel’s wife Lisa is the plucky frontierswoman with a mind of her own, and the brothers are the traditional good men trying to stay that way. These staples help the movie immensely when its non-linear approach kicks in, its deliberately steady pace allowing for more detail than expected, and for the themes of betrayal, greed, revenge and madness to work their way through the narrative more effectively. It’s a considered, more thoughtful Western, and it retains a moral compass that anchors the characters.

Samuel and Wyatt appear to be opposites, with the younger brother, Samuel, seeming to be less experienced and less mature, but as the movie progresses he proves to be his brother’s equal, and by the movie’s end he’s passed through what might be termed an adult rite of passage. Wyatt is more confident, firm in his beliefs and unafraid of doing the difficult thing, but he proves just as unprepared for what happens on the journey as Samuel. In a way, it’s his over-confidence that determines how much trouble they’ll both face, and whether or not they’ll survive the ordeal.

On the distaff side, Lisa and Maggie are the type of dependable women who seem used to being left by their men, and who harbour a mainly unspoken resentment of it. Maggie is fearful for her sons’ return because she’s already lost her husband to the Timber; she doesn’t want to lose them in the same way. Lisa is fearful because of her newborn child and being left alone, and sees the brothers’ quest as being irresponsible. When they leave she makes her feelings clear by avoiding a kiss from Samuel, then adopts his role by guarding the property while they’re gone. She’s a practical woman because she has to be.

Peck and Ransone make a good pairing, their physicality and dramatic intensity proving an apt fit for the material, while Lasowski offers grit and determination to spare. Kennedy uses Maggie’s loss to present a woman living in both the past and the present, and Bailie gets the chance to reveal a greater depth to the sheriff’s character than is at first apparent. As the underhanded Howell, Glover exudes a cold nonchalance that befits his character’s greed, and for those of you who may be wondering, yes it is the same William Gaunt who appeared in the cult Sixties’ TV series The  Champions who plays Jebediah (though you’d be hard pressed to recognise him).

With the Carpathians standing in for Canada’s Yukon territory, and what must have been a difficult shoot due to the conditions – there are plenty of moments where Samuel and Wyatt are wading through knee-deep snow – The Timber is a movie full of arresting visuals and stunning scenery. O’Brien directs with a reliance on close-ups to add a measure of unnerving claustrophobia to the wide open spaces, and keeps the madness – or mountain sickness – from being too over the top. At a trim eighty-two minutes, the movie doesn’t outstay its welcome, and while as mentioned before, it provides enough genre staples to keep most Western fans happy, it’s still likely to divide audiences at the end of the trail.

Rating: 7/10 – a solid, no frills Western with a psychological core, The Timber is a well-intentioned, idiosyncratic movie that impresses as often as it hesitates; there’s much to appreciate here, but it may depend on your frame of mind when watching it as to just how much appreciation it’ll receive.