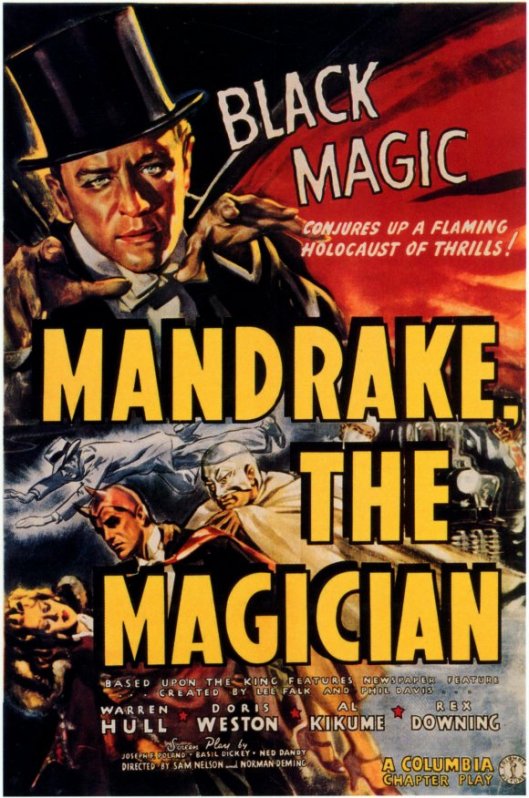 Trapped in the east wing of the Green Valley Rest Home, Mandrake and Betty manage to survive the Wasp’s attempt to kill them. The Wasp orders his men to abandon the place and in the ensuing confusion, Mandrake and Betty are able to get out. There they are met by Raymond, who tells them he was knocked out by some of the Wasp’s men, and Webster, who tells them he was captured but managed to escape. They find Bennett in the rubble, shaken up but alive. Mandrake and Webster go back into the rest home where they discover a tunnel that leads away from the home and out to the highway; there Mandrake finds a clue: a receipt from a car hire company.

At his home, and with everyone assembled, including Professor Houston who has been working on a machine that will be able to nullify the effects of the radium machine that the Wasp has, Mandrake tells them about the receipt, and asks them all to return at eight o’clock that night. He and Lothar head for the car hire place and see Dirk and some of the Wasp’s men drive away. They follow but Dirk manages to avoid them, and he meets up with the Wasp at his secret hideaway in the rear of an abandoned store. The Wasp reveals his plan to use the radium machine to destroy Mandrake’s home at eight o’clock, and to be there when it happens. Then he traps Dirk in a room that he floods with gas, and kills him.

At Mandrake’s home, eight o’clock draws near. He and Professor Houston reveal the nullifier, which causes Bennett, Webster and Raymond to each display an uncomfortable reaction. But as the Professor goes to place the final component he drops it onto the floor. As everyone searches for it, the radium machine – set on a timer – begins to activate, and the whole house collapses around everyone. 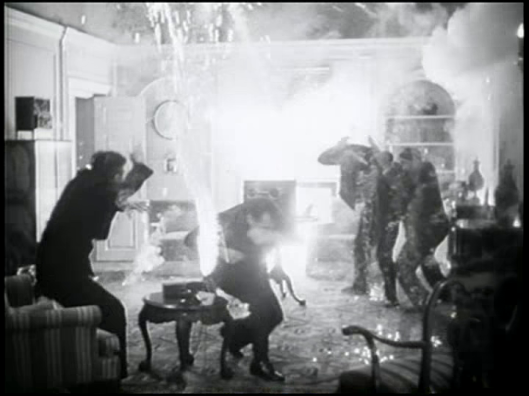 With its focus on making as many of its characters look as likely to be the Wasp as ever before – even Professor Houston is made to look suspicious – Chapter 11: At the Stroke of Eight is easily the best episode so far as the writers aim to wind things up with as much brio as possible. The early scenes outside the rest home have a brisk feel about them as each character’s explanation for being at the home is considered, and Mandrake begins to suspect the Wasp may be someone he knows. But he tells everyone his plans, and puts himself in harm’s way yet again (he’s clever, but now and again you have to wonder…).

But even though this episode has a lot going for it – not least the comical ways in which each character acts suspiciously – there’s still the usual number of odd moments that don’t make sense or challenge credibility. When the Wasp kills Dirk it’s in the same ante-room that he came through before meeting his boss, yet he enters the room through an entirely different door than the one before. As the radium machine begins to do its work, Betty and Tommy come running into the room and she shouts “The lights are off upstairs!” as if it was a major crisis (Weston also delivers the line to the floor for some reason). And even though the tunnel from the rest home leads out to the highway, it’s still not too far away for Raymond and Bennett to see Mandrake and Webster when they emerge from it.

With only the one brief fight scene – so brief that Kikume’s stunt “double” isn’t required – this chapter concentrates more on the narrative and proves even more enthralling for doing so. With one last chapter remaining, and the identity of the Wasp to be revealed at last, this episode sees the serial coming into its own at last after so many chapters that only provided filler.

Rating: 7/10 – it’s fair to say that the excitement is mounting, and Chapter 11: At the Stroke of Eight delivers the promise of an equally exciting conclusion to matters; a great precursor to Chapter 12 but an entertaining episode in its own right as well.