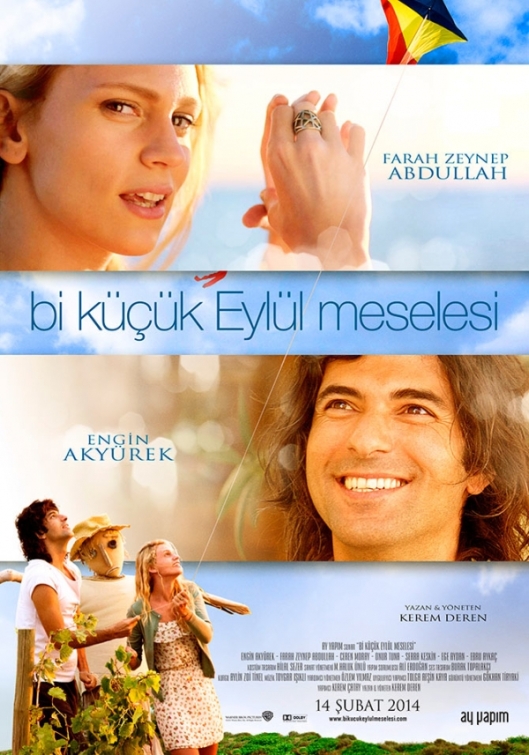 TV production associate Eylül (Abdullah) has a dream career, a handsome actor boyfriend, Atil (Tuna), and is living life to the full. But when a car crash causes her to lose her memory of the month immediately before the accident, it also causes her to wonder just why she can’t remember that time, and why she is getting sudden flashes of being on an island. Pressuring her best friend Berrak (Moray) into telling her where she was, Eylül learns that she and Berrak and Atil took a break to the island of Bozcaada a month before the accident.

Eylül insists on returning there, and reluctantly, Berrak goes with her. With her friend clearly hiding something, Eylül separates from her and encounters a young man, Tekin (Akyürek), who recognises her. But she doesn’t recognise him, however, he manages to persuade her to meet him at a nearby restaurant. There, he begins to tell her of the way in which they met, and their first “date”. But when Berrak calls her and warns her to get away, Eylül becomes frightened and runs away. Tekin follows her; when he catches up to her he shares another memory of their time together. When Berrak finds her, Eylül is even more confused by what her emerging memories are telling her, and Berrak’s insistence that they should leave and that everything is all right.

She continues to see Tekin, and he tells her how she decided to stay on the island instead of returning home with Berrak and Atil. He tells her how they visited various places on the island, and how she taught him to swim. Coming to understand that she and Tekin were falling in love, Eylül is still confused as to why Berrak is so worried by her being on the island, even after Tekin tells her about her visit to his home and she came to learn that he is the man she’s always sworn she’ll marry, an artist who provides caricatures for the newspapers. But Eylül remembers more: she remembers the morning after she and Tekin had first made love, and seeing herself in the mirror and not being able to recognise herself from the ambitious, fun-filled young woman she’d always aspired to be.

Atil arrives on the island and he and Berrak make her confront this memory, and the consequence of it, a consequence which she remembers, and which she discovers, brings her back full circle to the car crash and her loss of memory.

The first feature from the co-writer of the highly regarded Turkish TV drama Ezel (2009-2011), A Small September Affair is a small-scale winner that creates enough mystery out of Eylül’s missing month to keep the viewer intrigued and second guessing things throughout. It plays with notions of memory and imagination and longing with a lightness of touch that is both engaging and confident, and it deliberately avoids straying too far into more dramatic territory, despite an undercurrent that threatens to pull it that way on occasion.

The tone of the movie is all-important, as Deren constantly strives to undermine the audience’s expectations of what will happen next. By making Eylül’s memories potentially unreliable (each time she remembers something, Berrak comes along to question it), the movie makes each new revelation about her relationship with Tekin that much more important to her. This allows Eylül’s journey to balance precariously on the knife edge of fantasy, as each new “truth” shows her behaving in ways that don’t match up with someone who views themselves as “too joyful to fall in love”. As a result, the final revelation carries an emotional weight that acts like a hammer blow, and turns the whole need for Eylül to travel to Bozcaada completely on its head (as well as explaining Berrak’s behaviour).

The central romance between Eylül and Tekin is handled with a great deal of whimsy but it’s also well sustained by Deren and his two leads. Abdullah, with her blonde hair and depthless eyes, shines, both as the fun-seeking Eylül and her disconcerted, amnesiac future self. She’s an attractive screen presence, sprightly and high-spirited, allowing the audience to empathise with Eylül’s predicament and urge her onwards in her search for the “truth”. As her paramour Tekin, Akyürek employs a winning, puppy dog look that screams younger Ashton Kutcher lookalike, but it proves a strangely apt fit for a character who admits to being scared of everything, and who is joyful in ways that Eylül can only dream of. Together they play out a romantic game of charades that allows both actors to give completely endearing performances.

As might be expected, though, there are a couple of flaws in Deren’s script. Berrak’s behaviour, while explained at the end, is still too aggressive to be entirely acceptable in someone who is supposed to be Eylül’s best friend; and it’s hard to work out why Eylül herself is so suddenly convinced of her need to leave Tekin and Bozcaada behind, given that she’s acclimated to the island lifestyle so quickly and with such fervour (it’s that predictable moment in a romantic drama where an obstacle to everlasting love rears its ugly head and spoils things).

The movie benefits tremendously from its sun-drenched Bozcaada locations, lovingly lensed by DoP Gökhan Tiryaki, and makes a virtue of the relaxed, easy-going lifestyle its inhabitants enjoy. There’s also a fitting score by Toygar Isikli that matches the casual rhythms of island life and the touching romance between Eylül and Tekin, as well as the apt inclusion of Cyndi Lauper’s Girls Just Want to Have Fun in a party scene.

Rating: 8/10 – an emotionally sincere romantic drama that has its own fair share of deft, comedic moments, A Small September Affair lifts the spirits with efficiency and ease; with its central mystery adding depth to an otherwise standard love affair, the movie works on more than one level – and successfully throughout.

NOTE: The following trailer doesn’t have any English subtitles, but it’s still worth a look.