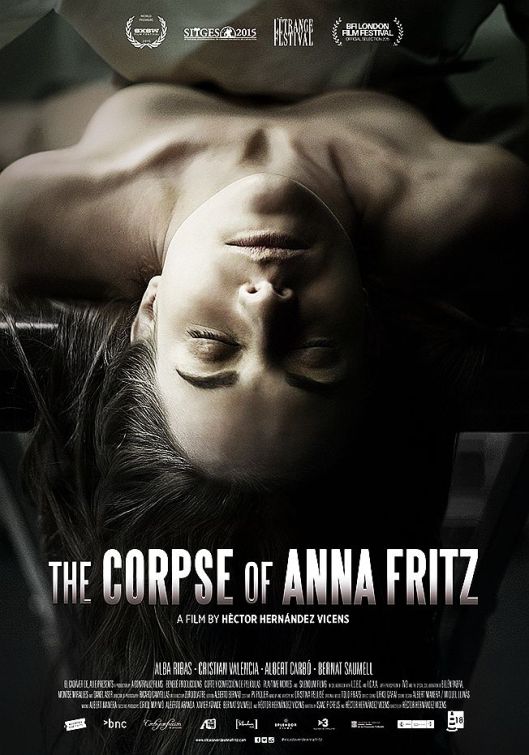 You have a friend, Pau (Carbó), who works evenings at the local hospital mortuary. When a famous actress, Anna Fritz (Ribas), dies and her body is kept overnight at the mortuary before an autopsy can be performed, you’d expect him to send you a photo of the dead actress, wouldn’t you? And you’d expect him to let you come to the hospital and have a look for yourselves, right? After all, how often do you get a chance to see a famous, and beautiful, actress live (so to speak) and in the flesh? And better still, naked? That’s the situation Iván (Valencia) and Javi (Saumell) hope to find themselves in when Pau sends exactly the kind of photograph that piques their interest and has them rushing to the hospital with unseemly haste. But seeing Anna Fritz naked isn’t enough, not for Iván at least. He wants to have sex with her; it doesn’t matter to him if she’s dead. So he does, and he cajoles Pau into doing the same. But when Pau takes his turn, something unexpected happens, something that will change everything, even to whether or not the three men will leave the hospital alive…

For some people, just hearing there’s necrophilia involved, and depicted, in The Corpse of Anna Fritz will have them reaching for the off button, or deciding not to watch the movie at all. But the movie has a lot more to offer the viewer than extremely inappropriate sexual behaviour, and once that section is dispensed with, it becomes a claustrophobic mix of horror movie and suspense thriller, with a handful of twists and turns that, while not exactly original, are still put together with enough skill and confidence by Vicens (here making his feature debut) that much of what follows is suitably tense and appropriately visceral. Iván, Javi and Pau find themselves trapped in the basement of the hospital as much by their own actions as any relating to the famous Miss Fritz, and as their predicament worsens, their alliance is threatened, broken apart, and irredeemably ruined. Vicens tracks all this with a predatory eye for the politics of survival, and the breakdown of societal norms. Having sex with a dead woman? That deserves more than just as slap on the wrist, and Vicens ensures the three men suffer for their crime.

Throughout its compact running time, the movie goes to great lengths to make one of its male characters someone the viewer can sympathise with, or even root for, but if there’s one issue that Vicens and co-writer Isaac P. Creus can’t solve, it’s that the characters exist in a vacuum, with no development occurring as the movie progresses. Any sympathy therefore is stymied in order for them to suffer instead. Thus the movie is more of an exercise in what will happen to them, when, and how. This mechanism works for the most part, and there are some clever riffs on one of the “punishments”, but as it builds to a climax, some of the tension is sacrificed at the altar of narrative expediency, though the movie does retain an urgency of purpose that could have been allowed to dissipate much earlier on. At least the main location explains the lack of other hospital staff in the vicinity, and the photography by Ricard Canyellas highlights M. Carmen Sanfrancisco’s spare yet effective production design. It’s all assembled with a view to providing the movie with an oppressive air, and though this approach isn’t always successful, there’s more than enough here to warrant a look-see.

Rating: 6/10 – a modest achievement that is only occasionally as challenging to watch as its makers may have wanted, The Corpse of Anna Fritz is nevertheless bolstered by its choice of location for the material, and the drama inherent in Miss Fritz’s situation; a bit of a mixed bag over all, but a bag that contains at least a couple of surprises, and one that shows that Vicens – with the right material – could well make a stone cold classic one of these days.