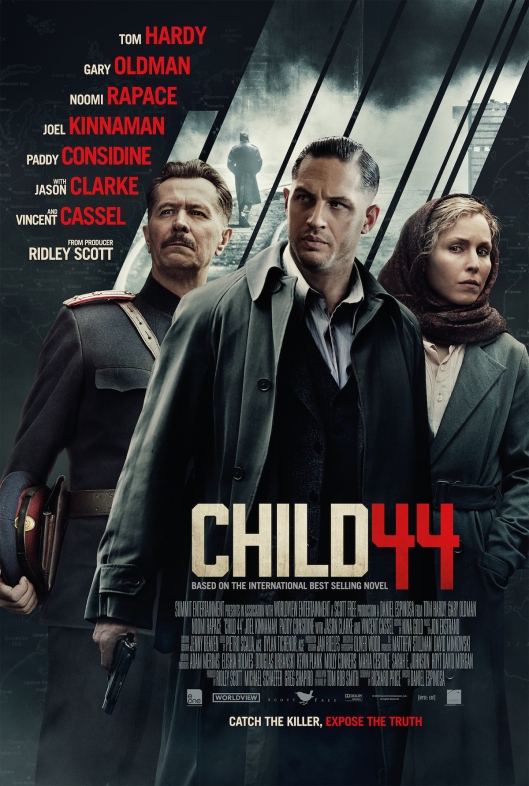 In post-war Soviet Russia, Leo Demidov (Hardy) is a respected officer in the Secret Police. Along with wartime comrades Vasili Nikitin (Kinnaman) and Alexei Andreyev (Fares) he investigates crimes against the state. When a suspect, Anatoly Brodsky (Clarke) goes on the run, their pursuit takes them to a farm where Brodsky has taken refuge. Against Leo’s wishes, Vasili kills the farmer’s wife and his young son; this drives a wedge between the two men.

A short while later, Andreyev’s young son is found dead by some railroad tracks. Though it’s clear that he has been murdered, thanks to Stalin’s edict that there shall be “no murder in paradise”, Leo is commanded by his superior, Major Kuzmin (Cassel), to tell Andreyev that the death was accidental. The idea doesn’t sit well with Leo but he goes ahead with it. When another child is murdered, Leo learns that there have been even more, similar cases. At the same time, he is tasked with investigating another suspected enemy of the state: his wife, Raisa (Rapace). She works in a school, and is friendly with one of the teachers, Ivan Sukov (Kaas). When his investigation reveals nothing incriminating about Raisa, his report is used as an excuse to strip Leo of his job and his home.

Leo is sent to Rostov to work under the command of General Mikhail Nesterov (Oldman). There, the discovery of another child’s body leads Leo to believe that the killer is responsible for over forty murders and is using the railway line between Rostov and Moscow as a means of hiding his crimes. Convincing Nesterov of his theory, Leo, aided by Raisa, returns to Moscow to seek help from Andreyev and gain access to files that will provide further information. But Vasili, who has been promoted to Leo’s old post, learns of his being in Moscow and tries to track him down and arrest him. Leo and Raisa manage to get out of Moscow and make their way back to Rostov. Now knowing that this is where the killer lives and works, Leo tries to find him on his own, but he has to work completely outside the law to do so. 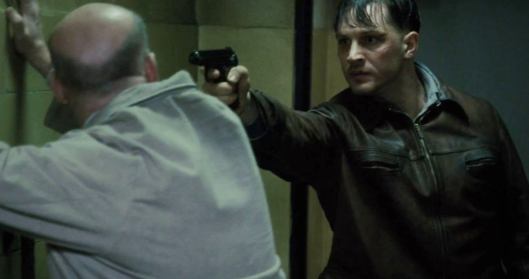 Based on the novel by Tom Rob Smith, Child 44 looks, on the surface, to be the kind of quality literary adaptation that offers outstanding performances, first-rate direction, a gripping script, and all of it culminating in a rewarding cinematic experience. Alas, this isn’t that kind of movie.

Instead, Child 44 is one of the most lethargic, dullest thrillers in recent years. It’s hard to say just what is right about the movie, cloaked as it is in a thick layer of cod-Russian accents and the kind of amateur thesping expected from a movie with a much smaller budget.

That such a talented cast appears so ill-at-ease is thanks largely to a script by Richard Price that leaves them high and dry in terms of conviction, and rarely links two scenes with any sense that they’re connected. The movie opens with two scenes that show Leo and Vasili growing up and during the war. Anyone who’s read the novel will know the importance of this, but thanks to Price it has as much relevance later on as its clichéd outcome requires (which isn’t much). There are other moments and aspects of the novel that are included and then ignored, such as Raisa’s initial fear of Leo when they first met, and these go some way to making the movie feel uncoordinated and ill-considered.

And the movie feels rushed once Leo has to look into Raisa’s activities, as if the strain of adapting so much wieldy material became too much and Price had to jettison any subtlety in favour of just ploughing ahead with the thriller side of things. The end result is a movie that plods along avoiding any attempt to re-engage with its audience. As such, it becomes a chore, and the average viewer will be regretting the lengthy running time.

As mentioned above, the cast can do little with what they’re given. Hardy – usually a reliably  hard-working actor – here fails to get to grips with the character of Leo, and gives a drab, uninspired performance that runs out of steam before even a quarter of the movie is over. Raoace, who really should be picking her roles with more perspicacity, is left on the sidelines too much and only ever registers when taking part in a fight scene. Oldman appears halfway through, has a handful of scenes and then disappears until the end; Kinnaman plays Vasili as a one-note sociopath (and looks increasingly like a young Keith Carradine); and Considine is saddled with the role of the killer, but never looks comfortable when trying to make him seem pitiable.

Perhaps it’s as much Espinosa’s fault as the script’s, as the director never seems to have s firm grip on the material, and shoots several scenes with a peculiarly uninvolved approach that makes them seem as if they’ve been included for the sake of it. Under his wing, the movie lacks any real thrills, and the race to track down the killer is hampered by too many longeuers to be entirely effective. And when you have a cast of this quality, not getting the best out of them is practically criminal.

Rating: 4/10 – with its superficial recreation of Soviet Russia, and cruelly dispassionate approach to the material, Child 44 never convinces; when a movie adaptation is this disappointing it’s a sure sign that everyone was having a very long off day.