In an unnamed medieval land, Raiden (Owen) is the leader of an order of knights called the Seventh Rank. He also acts as a retainer to Lord Bartok (Freeman), who took him in when he was younger and gave him a purpose. Bound by honour and his loyalty to his master, Raiden is disturbed to learn that Bartok has been summoned by Geza Mott (Hennie), a minister of the Emperor (Moaadi). Being nothing more than an attempt to extort money from him, Bartok makes the trip knowing full well that he will incur Mott’s enmity by not paying the fealty Mott expects. Mott confronts Bartok and there is a fight during which Mott is injured. The Emperor sides with his minister in the matter and condemns Bartok to death. When Raiden protests, matters are made worse by the Emperor’s insistence that Raiden be his master’s executioner.

With Bartok gone, his lands are dispersed and Raiden and his fellow knights are disavowed. They go their separate ways, with Raiden descending into alcoholism and losing all faith and honour. A year passes. While Raiden continues to be lost to drink and is distant to his wife, Naomi (Zurer), some of his men, led by Lt. Cortez (Curtis), are planning to break into the Emperor’s palace and kill Mott in revenge for their master’s death. But Mott has been paranoid about such a thing happening, and along with tasking his retainer, Ito (Ihara) with keeping watch on Raiden and his men, has fortified the palace to make it as impenetrable as possible.

With their plans in place, Cortez and the rest of the knights begin their infiltration of the Emperor’s palace, but instead of getting inside without being detected, they run into a group of guards. Now they have to battle through the Emperor’s entire garrison before they can reach Mott and take their revenge. 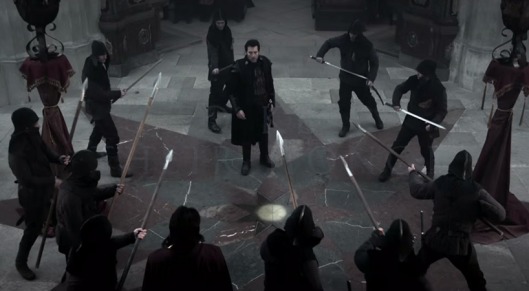 It’s hard to know where to start with a movie like Last Knights. Do you wonder at the involvement of actors of the calibre of Owen, Freeman and Hennie, or how bad their performances are? Do you look to the script by Michael Konyves and Dove Sussman and wonder why did it have to be so derivative of every other medieval actioner, or so full of clunky dialogue? Or do you look to the uninspired, gloomy visuals and wonder why DoP Antonio Riestra mistook “natural lighting” for “atmosphere”? Or do you look at the movie as a whole and pin the blame entirely at the door of Kiriya, who seems to have left the heady promise of Casshern (2004) far behind him?

In truth, you could task everyone concerned with how bad the movie is, and you wouldn’t be far off the mark. There’s not a moment in Last Knights that doesn’t remind the viewer of better movies, better performances, or better all-round experiences. With the look and feel of a low budget Nineties Euro pudding but without the rural location work, Kiriya’s ode to the kind of honour-bound warrior caste that can be traced back to The Adventures of Robin Hood (1938) (and probably beyond) is a misfire from start to finish. It’s so full of cliché and deadly longueurs that it chokes on its good intentions from the moment that Freeman begins to expound the tortured premise that marks out Mott’s villainy. With a line of political intrigue that stops dead with the Emperor’s complicit awareness of Mott’s scheming, and the kind of daring, suicidal attack on a heavily fortified building that is supposed to create tension – but here only generates ennui – the movie doesn’t even attempt to capitalise on the potential of its basic idea.

Owen, no stranger to playing moody characters who don’t say much, looks bored for much of the running time; it’s one of the few times where it looks as if an actor can’t wait for a scene to be over so he can get back to his trailer and do something more challenging. Freeman at least attempts to engage with the po-faced solemnity of it all, but he’s undermined by the sheer dreariness of the dialogue, and falls back on looking autocratically passive as a defining character trait. Hennie goes the opposite way, hamming it up with fierce disregard for credibility and swamped in the kind of costumes that wouldn’t look amiss on Fu Manchu. The rest of the cast also struggle with the demands of the script and Kiriya’s lacklustre direction, though there are odd moments when it seems as if a performance might raise its head above the level of mediocrity (if only briefly).

There’s a bloated middle section that’s like wading through glue as it follows Raiden and his men as they adjust to their new lives and plot their revenge. And the assault on the palace, when it finally arrives, features the kind of poorly choreographed combat where the knights only have to wave their swords around for an adversary to fall down dead. But by the time the viewer – if they’re still watching – gets to this point, the attack proves only fitfully exciting, and it becomes another impediment to the movie’s finally ending (and even then there’s an extended coda that tries to be poignant and speak to the nature of honour – unsuccessfully of course).

Rating: 3/10 – as much of a chore to sit through as it must have been to film, Last Knights never gets off the ground and appears content to keep itself mired in apathy-inducing banality; tired – and tiring – it’s a movie that all concerned must have committed to, and then decided never to mention it again.