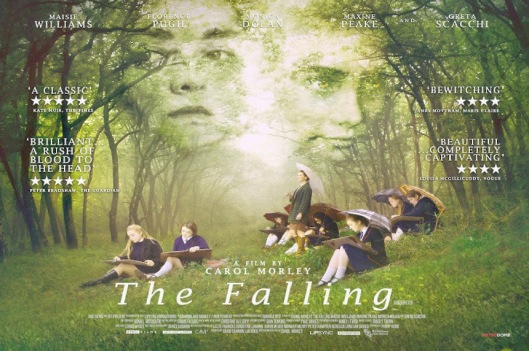 At a British girls’ school in 1969, Abbie Mortimer (Pugh) is liked and admired by all, especially her best friend, Lydia Lamont (Williams). Abbie though, has a rebellious streak, and is the first of the girls to have sex. But this leads to her falling pregnant and a subsequent series of fainting spells that lead to her unexpected death. Stunned by this sudden turn of events, Lydia begins to feel unwell herself, and soon she too is fainting, both at school, and at home where her mother Eileen (Peake) hides herself away from the world.

Lydia now assumes the role Abbie had in the school, and much to the vexation of teacher Miss Mantel (Scacchi) and school head Miss Alvaro (Dolan), more and more of the other girls begin to show similar signs of illness, and start fainting as well. At first, Miss Alvaro refuses to believe that anything is wrong, and is certain that Lydia and the rest are faking their attacks. But when it also affects one of the other teachers, Miss Charron (Clark), at an assembly, the school is faced with no option but to send the girls to hospital for tests to see if the pupils are guilty of deception, or if there’s a real medical reason for what’s happening.

Despite the crispness of Agnès Godard’s often exquisite photography, and an insistent but strangely apt soundtrack involving original music by Tracey Thorn, The Falling is not as mysterious or dramatic as it seems, relying heavily on visual motifs and too many shots that are meant to increase the sense of foreboding, but which only go to show that trees used as a metaphor actually remain just trees. The same goes for the repetitive nature of the faintings – instead of instilling any sense of dread they happen so regularly that by the time we see a group of schoolgirls hyperventilating in a hospital corridor, it’s more a cause for laughter than concern.

Morley leaves a lot of questions unanswered (not the least of which is the cause of Abbie’s death), and avoids taking one or two subplots down roads that would have made for more dramatic results (Lydia’s growing attraction for her brother, Kenny (Cole), for example), while the cast do their best with poorly motivated characters and the kind of dialogue that only teenagers in the movies come out with (Lydia even yells “Kill the system!” at one point). It’s all meant to be a fervent hotbed of paranoid mass hysteria, and while it’s a situation that obviously goes too far, there are few consequences for the characters involved, and by the end we’re back where we started. There’s a decent idea here, but there’s also too much that’s elliptical or left hanging, leaving the movie only occasionally successful in what it’s trying to do, and only occasionally rewarding for the viewer.

Rating: 5/10 – dramatically unsound and lacking in any clear focus as to what it’s trying to say (other than that teenage girls are incredibly susceptible to hysteria), The Falling is a psychological mystery overlaid with an arthouse approach that doesn’t suit the material; obtuse and trying to be profound, the movie stumbles along revealing little about its characters beyond the obvious, and does its best to keep them at a distance.