In the small town of Downers Grove, an annual series of deaths involving high school seniors has led to the belief that there is a curse on the town, though no one can explain why it’s happening. Each death has a rational explanation but the fact that it’s always a senior and it always happens in the week before graduation has entrenched the belief even further.

Chrissie Swanson (Heathcote) is a senior who doesn’t believe in the curse, though her best friend Tracy (Mitchell) does. As graduation approaches, Chrissie’s single mother Diane (Slater) goes away on a trip with her new boyfriend, leaving Chrissie and her younger brother, David (Spanjers) to their own devices. Tracy keeps wondering who will be this year’s victim, even suggesting it might be Chrissie. When they get invited to a party by local college quarterback Chuck (Zegers), his obvious attraction to Chrissie leads to his assaulting her, and in her efforts to get away from him she gouges out his right eye.

With his future as a star quarterback in ruins, Chuck begins to harass and intimidate Chrissie, letting her know how much he plans to make her life a misery. Chrissie begins seeing a mechanic called Bobby (Till), while unbeknownst to her, Tracy and David have invited pretty much everyone to the house for a party. As Chuck’s harassment begins to escalate, Chrissie goes to the police but when they learn that Chuck’s father (Arnold) is an ex-cop they close ranks and refuse to help her. David is beaten up and has his right hand badly broken. Bobby confronts Chuck and his cronies but he too is beaten up.

On the day of the party, Chrissie decides that she can no longer try to deal with Chuck on a normal level, and his insistence on their being together (even though she blinded him) isn’t going to be deterred by her obvious dislike of him. And when Chuck and his cronies invade the party, firing guns and scaring off everyone, Chrissie, David, and Bobby all make a stand to end things once and for all. 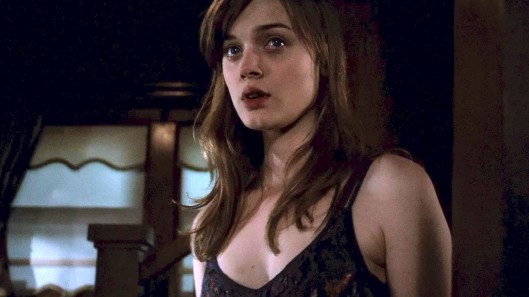 With its misleading title, and the involvement of author Bret Easton Ellis as co-screenwriter (with director Martini), The Curse of Downers Grove looks to all intents and purposes to be a small town horror movie with mystery elements. However, it’s really a small town thriller with one of the most ridiculous plots yet devised for the screen. In fact, as each development unfolds it becomes clear that the more absurd the idea, the more determined Ellis and Martini are to forge ahead with it. This is likely to leave the viewer scratching or shaking their head in disbelief for much of its running time.

There are so many things wrong with the plot and basic storyline that it’s hard to know where to start. The curse – introduced at the beginning in a gory black and white flashback – is practically abandoned as soon as we meet Chrissie and Tracy, and as the movie stumbles on, it becomes less and less important, until it’s rudely shoehorned back into the movie at the end in a vain attempt to provide some kind of shocking conclusion (which it isn’t). Occasional references are used to remind the viewer that what’s happening could all be leading up to the curse taking effect, but the focus is clearly on Chuck’s war of attrition and psychotic tendencies, and the script makes no attempt to connect the two.

Worse still is the issue of Chuck’s right eye. He doesn’t go to hospital, he just goes home and tries to patch things up himself. And then his dad comes in and instead of being shocked or concerned or sympathetic, is angry at his son for what happened and for ruining his future career in football, and attempts to beat him. The police aren’t called (remember, Chuck’s dad is an ex-cop), Chrissie isn’t arrested or questioned, and everyone gets on with their lives as if it had happened to somebody else in another town. Until Chuck goes all psycho…

From then on, the movie spirals downhill out of control and appears unconcerned as to how stupid or ridiculous it’s becoming. It’s the kind of movie where characters suddenly announce that their father taught them how to shoot when they were younger, and maybe it’s time they get out his old rifle, just before the inevitable showdown. It’s a movie where Chrissie’s creepy neighbour and childhood friend, Ian (Young), behaves even more alarmingly than Chuck does but somehow manages to avoid any suspicion that he might be up to no good. And it’s a movie where Chuck suddenly starts walking around with a bandage taped over his right eye and no one bats an eyelid (pun very much intended).

The lack of attention in the script leaves the cast high and dry. Heathcote has an alarming lack of facial expressions, making it difficult to work out what she’s feeling unless she says it out loud, and Till adds another showroom dummy role to his resumé. Zegers offers a one-note performance that struggles to be credible on any level, Mitchell pouts a lot to little effect, Spanjers is an unconvincing teenager (he was twenty-six when the movie was made), Slater plays the lovestruck middle-aged mom to surprisingly good effect before being written out for the rest of the movie, and Arnold is completely and totally wasted as Chuck’s dad (whose angry motivation is as nonsensical as his son’s psychopathy).

In all, it’s a disaster of a movie that could have been a lot more effective, and potentially creepy, than it is here. Martini – whose first feature, Lymelife (2008), is a well-polished gem of a movie, and well worth seeing – makes such a bad fist of things you begin to wonder if his heart was really in it. Scenes take place that are so desultory that again, it makes the viewer wonder if the cast were looking at their watches to see if the day’s shoot was almost over. Add to this the fact that the movie was shot nearly two and a half years ago, and is only now getting a release, and you have all the hallmarks of a movie that’s dead in the water but doesn’t know it.

Rating: 3/10 – one step up from being abysmal, but only just, The Curse of Downers Grove is an object lesson in how not to make a scary thriller; tedious, muddled, and disappointing throughout, this should be avoided like a bad case of the runs.