What do you do when someone you’ve never met before – or more appropriately, never knew existed – suddenly appears and tells you they’re related to you, that you’re cousins? That’s the situation that Davis Green (Cross) faces at the beginning of The Automatic Hate, an indie drama that asks the question, should family secrets stay secret for the good of everyone involved?

When Davis’s cousin Alexis (Clemens) comes calling out of the blue, his relationship with Cassie (Woll) is going through a rough patch. Cassie is distant yet emotional, and conversation between the two is awkward. When Alexis reveals that she is the daughter of his uncle Josh (Jay), Davis is understandably confused because up until that moment he didn’t know he had an uncle. And when he tackles his father, Ronald (Schiff), over this surprising news, all he gets in return is, “We never talk about him”. As you might expect, Davis isn’t exactly satisfied with his father’s response, but can’t get any further answers. 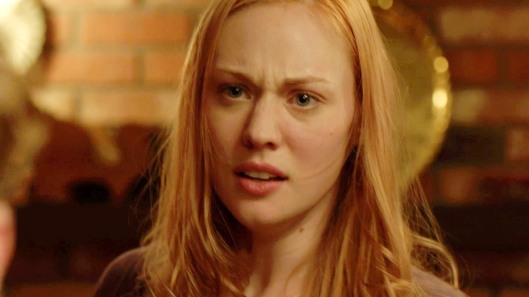 Partly to find out why there’s such a hatred and division between his father and his uncle, and partly to give himself some space from Cassie, Davis decides to seek out his extended family and to try and discover why such a serious rift began in the first place. He travels to upstate New York and learns that he has two other cousins, Annie (Yvonne Zima) and Amanda (Vanessa Zima), and in turn meets his uncle. Josh at first believes Davis has been sent by Ronald to spy on him, and insists Davis should leave. But the mystery of the rift, and Alexis’s increasingly romantic attentions keep him there; he finds himself responding to Alexis’s almost desperate attraction to him, and he stops responding to Cassie’s texts and calls.

The discovery of some old home movies by Davis and Alexis shows the two brothers as much younger men, and in the company of a young woman. One scene shows Josh and the young woman holding hands. Davis deduces that the rift is the result of a romantic triangle, and that Josh stole Ronald’s girlfriend from him. But this development has to be put on hold due to the death of Davis’s grandfather (and the brothers’ father). Despite the differences between the two men, Davis convinces Josh to attend the funeral, which is to be held near to a summer house owned by the family. The family unites at last, but tensions are high, and matters are made more difficult for Davis by his relationship with Alexis and the unexpected presence of Cassie. And then the mystery of what happened all those years ago is revealed…

Fans of indie dramas will be pleased with the nature of Justin Lerner’s latest feature, and in particular with the way in which he sets up the main storyline, which isn’t the mystery at the heart of things, but the relationship between Davis and Alexis. From the moment they meet there’s a clear attraction between the two, but Lerner keeps them apart for quite a while, with Davis’s loyalty and commitment to Cassie as his reason for not acting on his newfound feelings. It’s during this period that the movie moves in parallel with events from the past, and there are tonal and emotional references that infuse both past and present. Lerner, along with co-writer Katharine O’Brien, keeps things low-key, but with hints of the greater drama to come, and the opening forty minutes sees the movie establish a setting and a mood that is very effective.

But then the family comes together, and the movie feels obliged to step up a gear. The ensuing drama, heightened as it is by the revealing of family secrets and the kind of dinner table confrontations – physical and verbal – that have a habit of destroying any attempt at familial accord, is an uncomfortable change of approach and the movie suffers as a result. Alexis’s behaviour in particular is a cause for concern, as the script allows her full rein to express her feelings for Davis. But she does so in such a way that most viewers will be thinking, “Uh oh, watch out Davis!” And how their relationship develops from then on also weakens the movie, leaving the final scenes to limp unconvincingly to the end credits, undoing so much of the good work that’s gone before.

But while the final twenty minutes prove disappointing due to the script’s need to provide viewers with an unequivocal ending to the problem of Davis and Alexis’s relationship (and the decision it makes regarding their relationship), there are still plenty of things to recommend the movie. Along with Lerner’s confident handling of the material, there’s a clutch of effective, carefully modulated performances with Clemens and Jay stealing the honours from everyone else. Clemens – yet another Australian actress making the successful transition to US movie making – is vulnerable and disturbing in equal measure as Alexis, and exudes an unspoken menace at times that gives her character an edgy, dangerous quality that is both attractive and unnerving at the same time. Jay is equally good as the estranged uncle, resigned, implacable, and dignified in the face of Schiff’s angry brother. He’s an actor you can always rely on, and here he gives one of his best performances, allowing the enmity Josh feels to be expressed in dismissive looks and carefully loaded comments.

And of course, there’s the mystery itself, the movie’s McGuffin. Lerner is canny enough to provide clues that point in one direction while also maintaining the sense that nothing is quite what it seems (the home movie footage, if watched closely, is both explanation and red herring). When it is revealed it packs a punch that doesn’t dissipate easily, but it’s not allowed to overwhelm what follows. Lerner switches focus quickly, and the movie becomes oppressive for how it prompts reactions amongst the characters, and some bitter outpourings. Again, it’s not an entirely successful transition but one of the movie’s strengths is that it doesn’t always do what the audience may be expecting it to.

Rating: 7/10 – with much to recommend it, The Automatic Hate is a worthy indie drama with good performances, a (mostly) well constructed script, and a director firmly in control of the material if not the narrative; tense on occasion, with flashes of mordaunt humour to offset the latter half’s overwrought drama, the movie is on firmer ground as a study of the ties that bind family members, and is especially effective at exposing just how fragile those ties can be.