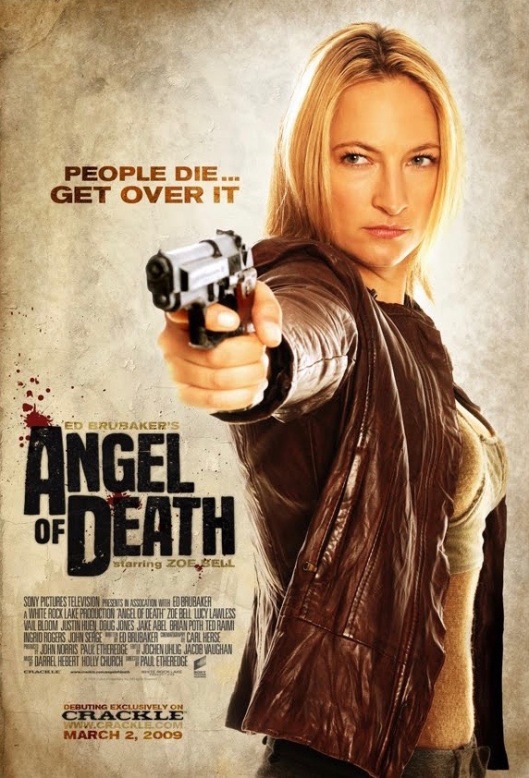 The career of Zoë Bell is one you could charitably and fairly say is all due to the influence and intervention of one Quentin Tarantino. If he hadn’t picked her to a) be Uma Thurman’s stunt double in both Kill Bill movies, and b) to do the “ship’s mast” stunt in Death Proof (2007), then it’s unlikely she would have the acting career that has followed in the wake of those movies (prior to Death Proof, her only big screen appearance – believe it or not – was in Billy Elliot (2000). A short stint on Lost (2008) followed, but Angel of Death was the first movie to put Bell front and centre.

Except that Angel of Death was originally a web series, ten episodes that aired on Crackle in March 2009 and which ran eight to ten minutes per episode. The series had limited success (a second season was considered but has yet to be made), but it provided Bell with a showcase for her obvious physical talents, while at the same time highlighting her limitations with dialogue and characterisation. For every kick-ass moment where she punches and kicks people in the face, there’s another that sees her mangle her lines as if the effort of disguising her New Zealand accent is too difficult when combined with speaking like an American. 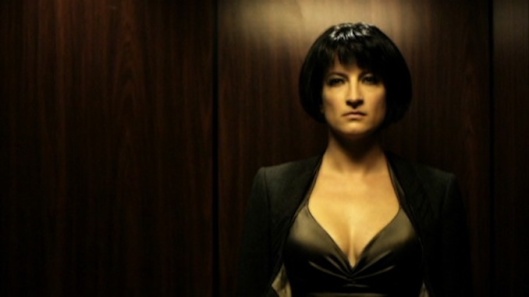 However distracting Bell’s limitations may be though, Angel of Death provides the stuntwoman-turned-actress with a platform on which she can showcase her tremendous physical presence. Bell plays Eve, an assassin working for shadowy fixer Graham (Poth). The pair are partners in both their professional and private lives, and there’s an edge to their relationship that has more to do with Eve’s unwillingness to be treated like an employee rather than an equal. A straightforward hit is initially successful, but goes wrong when Eve finds herself facing two unexpected bodyguards and their charge, the target’s teenage daughter. Eve dispatches all three, but not before one of the bodyguards manages to stab her in the head (leaving the blade in her skull).

How you react to the sight of Bell with a knife sticking out of her head will set the tone for the rest of the movie. Keep a straight face, and you’ll find yourself accepting the movie’s more perverse developments with an ease that will probably surprise you. Laugh, and you’ll find yourself deriding those selfsame developments with the same amount of ease. And if that image isn’t enough to sway matters one way or the other, then the later image of Doug Jones’ mob-related Dr Rankin pulling it out without benefit of anaesthetic or proper surgical procedure, will decide things once and for all (clue: your ribs should be aching). 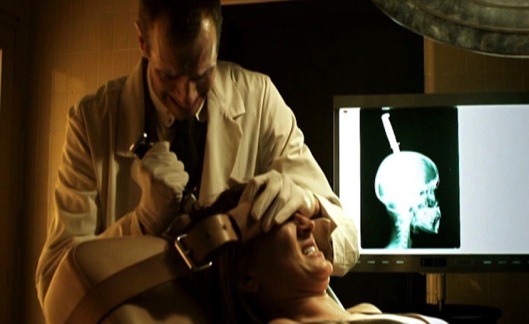 But to paraphrase Peter Parker’s Uncle Ben: with great cranial relief, comes great responsibility, because Eve begins to have disturbing visions of the teenage girl she killed. Worse yet, these visions have the effect of causing her to go after the people involved in hiring her. This leads her to Arthur Max (Serge), an underworld fixer in the same vein as Graham but with less of a conscience. Eve takes the first of several beatings before she manages to kill him. This brings her to the attention of Max’s boss, the young but suitably psychopathic Cameron Downes (Abel). Downes is the son of an ailing crime boss, and has designs on inheriting the business sooner than his father may have planned. He’s a nasty piece of work whose weapon of choice is a cutthroat razor.

With Eve trusting no one, everyone is out to find her, including Graham, Cameron, the FBI, and a former colleague, Franklin (Huen), who winds up working for Cameron’s duplicitous sister, Regina (Bloom). With Eve’s hallucinations having an increasingly deleterious effect, she soon finds herself face-to-face with a bloodthirsty Cameron, but with the odds stacked massively against her. (You can guess the outcome, especially given a second season was mooted.)

Amongst all the bone-cracking fight scenes, the script by Ed Brubaker makes random attempts to give Eve and Graham’s relationship a sense of poignancy, and gives Huen a chance to humanise his character – even though he’s supposed to be a hitman (who instead comes across as a bit of a whinger). Etheredge directs things with an eye for making Eve’s world a low-budget film noir (the action seems to take place in and around the seedy tenement building in which Eve lives), but beyond the visual look of the movie he has no control over the actors or the vagaries of Brubaker’s credibility-lite screenplay. 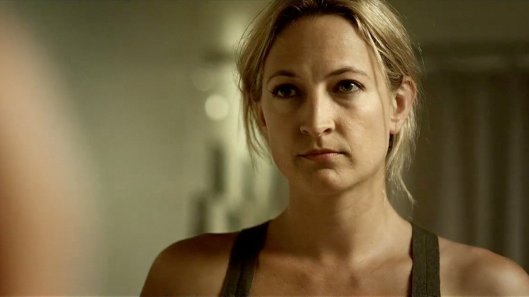 But this is an action movie first and foremost, and Etheredge does know where to put the camera during the numerous fight sequences. Alas, and despite Bell being her own stuntwoman for these sequences, these scenes are perfunctory and Ron Yuan’s fight choreography isn’t particularly thrilling, leaving them looking and feeling brutal, but without the emotional connection to Eve that would have you willing her on when things aren’t going her way. The episodic nature of the material doesn’t help either, or the way in which Eve recovers from each bout as if it’s never happened (really, she has powers of recovery that would embarrass the Wolverine).

But in the end, none of this is Bell’s fault. Brubaker’s script is a mess, Etheredge’s direction is cumbersome at best and lazy at worst, and the cast go about their performances as if each of them were appearing in a completely different movie. There’s a short, filmed-in-a-day performance by Lawless that is meant to provide some comic relief, but by the time she appears, there’s been too much comedy elsewhere for her ex-hooker character to register as anything more than a cameo for Bell’s benefit (Bell was Lawless’ stunt double on Xena – Warrior Princess). Bell does her best, and she’s surprisingly watchable, but only seems comfortable when she’s kicking ass, and not trying to approximate the kind of PTSD her character is suffering from.

Rating: 4/10 – Bell is the star attraction here, but like so many low-budget action thrillers, Angel of Death is strong on mood but weak on plausibiity; there’s some unnecessary comic strip transitions between episodes, some equally unnecessary attempts at providing depth, and a nagging sense that no one really felt there would be a second season.