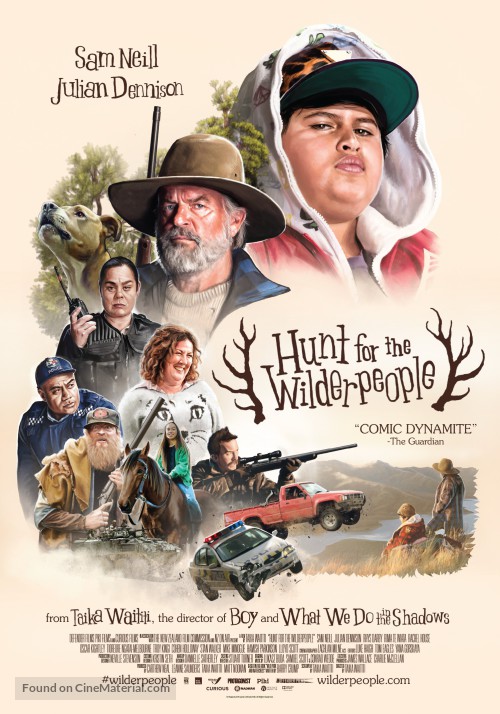 Ricky Baker (Dennison) is a problem child. He’s in the care system, and has a reputation for disobedience, stealing, spitting, running away, throwing rocks, kicking stuff, defacing stuff, burning stuff, loitering, and graffiti-ing (and that’s just the stuff Child Services knows about). In short, he’s a real bad egg. But he’s been given one last chance: to be looked after by Bella Faulkner (Te Wiata) and her grouchy husband Hec (Neill) on their farm. Bella is endlessly upbeat despite a tendency for inappropriate comments (“Whoo! You’re a big fella. Who ate the guy who ate all the pies, eh?”), but her heart’s in the right place and she more than compensates for Hec’s less than welcoming behaviour. Ricky runs away the first night, but doesn’t get very far, and soon he’s running away each night – but he’s always back in time for breakfast.

Responding to Bella’s ministrations, Ricky soon settles in and begins to take an interest in the farm and Hec’s role. Hec teaches Ricky to shoot, and they begin to form a bond. When Ricky’s birthday comes around, the Faulkners get him a dog, which he names Tupac. But tragedy strikes, and Ricky is required to go back into the care system. Refusing to go he heads off into the Bush, and determines to remain in hiding. Hec soon finds him, and they begin the return journey home when Hec breaks his ankle. Forced to stay in the Bush while his ankle heals, six weeks pass, during which Child Services, in the form of would-be Agatha Trunchbull, Paula Hall (House), and the police, search for the missing pair. An encounter at a lodge with a trio of hunters who are looking for Ricky and Hec leads to Hec being regarded as a pervert, and Ricky having been kidnapped. 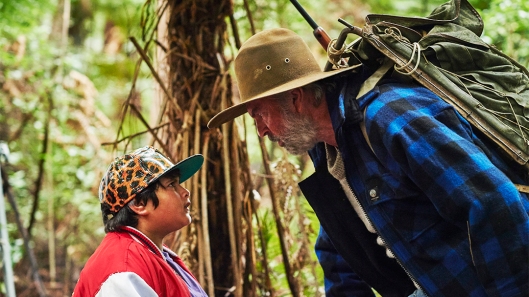 Ricky and Hec go on the run, and decide to hole up in the Bush until the search for them peters out. They survive by catching or foraging for food, use the “Knack” – a kind of semi-mystical knowledge that allows them to avoid being found and to survive in the wilderness – and slowly and surely learn to trust and respect and depend on each other. But the search for them continues unabated, thanks to Paula Hall’s determination that “no child is left behind”, and the occasional help afforded them by strangers such as young girl Kahu (Ngatai-Melbourne), and raving conspiracy theorist Psycho Sam (Darby). But inevitably the pair are tracked down and it only remains to be seen if they go out with a bang or a whimper.

An adaptation of the novel Wild Pork and Watercress by Barry Crump, Hunt for the Wilderpeople is one of the most enjoyable and endearing movies you’re likely to see all year. It has charm by the bucket load, an irresistible central character in Ricky Baker, is peppered with some of the funniest dialogue heard in a very loooong time, and features some absolutely stunning New Zealand scenery. And because it all takes place in New Zealand there’s a fantastic Lord of the Rings joke to round things off. It’s a movie that, thanks to the efforts of writer/director Taika Waititi, provides enough comic indulgence for two movies. 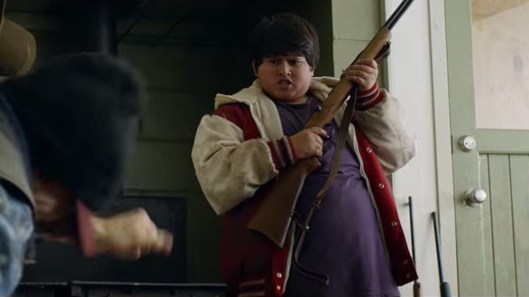 It features a quartet of wonderfully bizarre and idiosyncratic performances as well, from Neill’s wonderfully arch turn as a man with all the parental skills of a confirmed malcontent, to Te Wiata’s brief but heartfelt portrayal of a woman for whom the act of caring compensates greatly for the one regret she’s ever had in life, to House’s grotesque Child Services agent, a loud, over-earnest, bullying monster of a woman who won’t be beaten by Ricky at any cost, as evidenced by this brilliant exchange:

But when all’s said and done, this is Dennison’s movie. He owns the role of Ricky Baker as if he’s played it all his life, from the constant gangsta/thug life referrals, all the way to the petulant disregard for others he uses as a shield against getting hurt. Dennison is nothing short of superb here, soaking up Waititi’s fluid direction and relaying with disarming simplicity the problems of being in a care system that doesn’t actually care about him. He’s also a great physical comedian, using his size in unexpected ways to draw out several moments of equally unexpected humour. And his timing isn’t too bad, either. Witness the scene where he tries to cajole Hec into looking for a Russian bride online: when Hec looks at him with disdain, Ricky’s deadpan “Too soon?” is served up to perfection. 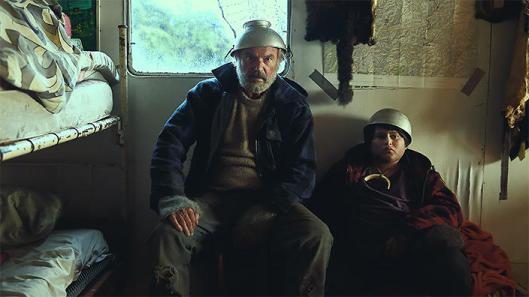 In amongst the humour, Waititi is wise enough to keep the sermonising about the importance of family ties, and just what makes a family, to a minimum, and the demonisation of Child Services via the character of Paula is kept from becoming too silly or ridiculous thanks to Waititi’s assured handling of his own script, and House’s confident awareness of the character’s narrative limitations. She’s a cartoon figure in many respects, and in some ways the Yosemite Sam to Ricky’s Bugs Bunny, but not drawn or portrayed too broadly to be completely obnoxious or hateful. (There’s a sad back story there, no doubt, and one that would be good to know more about.) The relationship between Ricky and Hec is allowed to develop naturally, and is helped by the passage of time. Neill and Dennison work very well together, and the early scenes where they clash adds poignancy later on when it becomes clear to both of them just how much they need each other.

As mentioned before, the whole thing plays out against the backdrop of some spectacular New Zealand scenery – the opening credits sequence as the camera skims the treetops of the Bush sets the tone for the movie’s overall look and feel – and DoP Lachlan Milne captures the rugged beauty of the Bush itself and the surrounding terrain with clarity and precision; it’s a visually splendid movie to watch. And to cap it all off, the soundtrack, with its mix of original compositions and well-chosen songs – Nina Simone’s version of Sinnerman is put to particularly good use – adds an extra layer of finesse to a movie that already has more than enough finesse already.

Rating: 9/10 – a feel-good movie that doesn’t even have to try too hard to make its audience laugh or cry, Hunt for the Wilderpeople is beautifully observed, beautifully constructed, and effortlessly satisfying; Waititi is to be congratulated for taking material that could have been treated with far less care than is shown here and making it feel special, and for making a movie about a fat kid and his grumpy “uncle” that is nothing short of “majestical”.