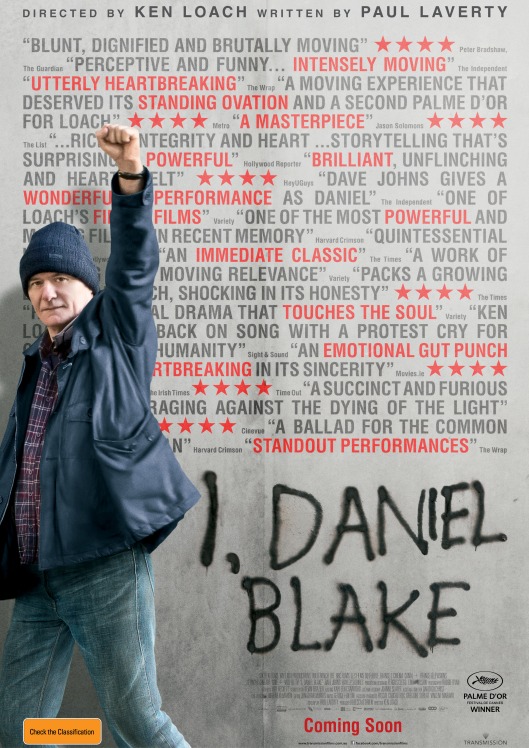 As the opening credits of I, Daniel Blake are displayed, the viewer gets to hear a conversation that the movie’s title character (Johns) is having with a “healthcare professional”. The “healthcare professional”, a woman, is asking a series of questions that have nothing to do with Daniel’s recent heart attack. As he gets more and more frustrated with her, it becomes clear that he’s already become stuck in a welfare system that can’t deviate from its proscribed formulas and rules. The end result is a situation where Daniel’s health is such that his doctor and his consultant have advised him that he shouldn’t work until he’s fully recovered. But he’s unable to claim the Employment Support Allowance (ESA) that would tide him over until he’s better; he’s just not unwell enough as judged by the criteria. And with the so-called “healthcare professional” not having followed up about his health with his doctor, Daniel finds that if she had, he would have had enough points.

But he’s stuck with having to appeal the decision, which isn’t as straightforward as he expects. While he waits for the appeal to be heard, he has no choice but to claim Jobseeker’s Allowance (JSA), which is for people who are fit and looking for work. Needing money to live on but now finding himself stuck in a twilight world where strict rules often fail to help an individual’s needs, Daniel soon discovers that getting any kind of financial support is much, much harder than it looks (or should be). A carpenter who’s mostly worked on building sites for forty years, and who has been recently widowed, Daniel isn’t computer literate (instead he’s “pencil literate”, as he puts it) and struggles to fill in the requisite forms online. His efforts to look for work – because he hasn’t got any evidence of doing so that the Job Centre will accept – are looked upon unfavourably, and he’s threatened with sanctions if he doesn’t make more of an effort.

Through all of this, Daniel meets and befriends a young, single mother of two called Katie (Squires). Having had to move from London to Newcastle in order to live somewhere better than a homeless persons’ hostel, Katie is also struggling for money. Daniel helps her out where he can, mostly in a practical way by helping out around her new home, and in the process he bonds with her two children, Daisy (Shann) and Dylan (McKiernan). They support each other, their unlikely friendship borne out of their frustrating efforts to get the UK welfare system to help them in the short term. But even their friendship is put to the test by the system’s lack of support, and when Katie makes a decision that has (potentially) wider consequences, it causes a rift between them, and both find themselves alone again.

A few years ago, Ken Loach announced his retirement from movie making. He’d made Jimmy’s Hall (2014), and wasn’t sure he could continue with the same amount of confidence in his abilities as he had before. It was an understandable feeling, but one that many people hoped Loach would overcome. Obviously, he has. But if anyone had any doubts that Loach wasn’t capable of maintaining his passion for movies, and the making of them, then I, Daniel Blake is the movie to dispel those doubts. Laced with Loach’s trademark vitriol when dealing with blinkered authority, this is a movie that shows Loach has lost none of his skill in dissecting the ills lurking at the heart of British society, and the ways in which the under-privileged are treated with such disdain.

Along with regular screenwriter and collaborator Paul Laverty, Loach has fashioned a caustic tale of intransigence within the UK welfare system, and in doing so, has highlighted some of the more farcical aspects of said system. There’s a scene where Daniel, having given his CV to a number of potential employers, receives a phone call from one of them offering him a job. But because his ESA appeal is still pending he’s unable to take up the offer. This causes the employer to brand him a timewaster and someone who’d rather take benefits than work. It’s an untenable situation, and Daniel has no answer to it except to continue to plough through the mountain of red tape that seems designed to keep him from getting any money at all.

Likewise, Katie has her own problems in getting any JSA. New to the city she misses her first Job Centre appointment by minutes and is told she can’t claim any money because she’s late. There’s no attempt to allow for extenuating circumstances, and when she protests she’s asked to leave; no one is interested in hearing her out. Loach uses examples like these to show just how unyielding and implacable the system is, and how it keeps knocking people down at every opportunity. If, at the start of the movie your understanding of the UK welfare system is that it isn’t as flawed as everyone makes out, then that understanding will be completely washed away by the movie’s end.

Loach’s passionate, didactic approach is, however, as heavy-handed and lacking in subtlety as ever. He and Laverty pile on the problems and the knockbacks and the condescension and the impugnity of uncaring authority figures with little regard for the drama of the piece. The movie is relentless in this respect, adding to Daniel’s woes in almost every scene, and by the end it’s an exhausting experience just watching a once proud man pushed to the limit of what he can endure. Katie also suffers, her efforts to keep her children safe and healthy meaning that she has to experience the opposite. With Loach and Laverty keen to prove just how terrible being dependent on the welfare system can be, their efforts to show just how bad it all is soon feels like they’re trying too hard. It shouldn’t take long for the viewer to understand and appreciate what they’re saying – and within the first twenty minutes, easily – but they can’t resist making it worse the longer the movie continues.

This makes the movie sound like a distressing polemic, a one-sided view of life in 21st century Britain. And it is, but thankfully it’s leavened by a streak of mordaunt humour that makes things more tolerable, and which allows Loach to lighten up from time to time and acknowledge that no matter how bad things get, even the most downtrodden of people can find something positive to fall back on. Daniel and Katie have each other, and their shared experiences help make things more bearable for both of them. Loach allows them (and the viewer) hope – and that’s the right thing to do. How else does anyone survive being treated so badly by a system that’s supposed to be helping them?

Loach is ably supported by two commendable performances from Johns and Squires. Johns is a comedian making his feature debut, and he gives a beautifully judged portrayal of a man falling into despair but who’s determined not to give in. His plaintive, frustrated expressions speak volumes, while his attitude and physical presence in certain scenes are deliberately downplayed to show how much his will to fight has been whittled away. Squires is equally impressive, making Katie an entirely believable character whose focus is always on her children, and who is willing to make whatever sacrifice she can to keep them with her. There’s a scene in a food bank that is easily the movie’s best moment, and Squires is magnificent, letting Katie’s fears and desperation overwhelm her to heartbreaking effect.

In the end, much of I, Daniel Blake isn’t “enjoyable” in the traditional sense, and it’s not meant to be, clearly. Loach is on a mission to highlight the absurdity and misery that go hand in hand in today’s Britain if you’re seeking government assistance, and he more than succeeds, even if at times it’s at the expense of narrative consistency (the one authority figure Katie encounters who doesn’t add to her woes, only lets her off the hook because if he didn’t, the script wouldn’t be in a position to allow her to make the decision that causes a rift between her and Daniel), or credible characterisations (one Job Centre operative is so callous and uncaring it’s beyond caricature). But again, Loach isn’t exactly known for his subtlety, but he is aware of the message he’s sending, and in that respect, it’s good to have him back after his “so-called” retirement.

Rating: 8/10 – Loach’s second movie to win the Palme d’Or at Cannes – the first was The Wind That Shakes the Barley (2006) – I, Daniel Blake is a powerful, depressing, enraging, and yet touching movie made by a director who can still get angry at the injustice he sees being meted out to Britain’s social underclass; whatever your view on Loach’s politics, one thing is undeniable: he’s a director, who at the age of eighty, is still capable of making vital, socially relevant movies after nearly fifty years, and who shows no sign of (really) letting up just yet – and that’s something we should all be grateful for.