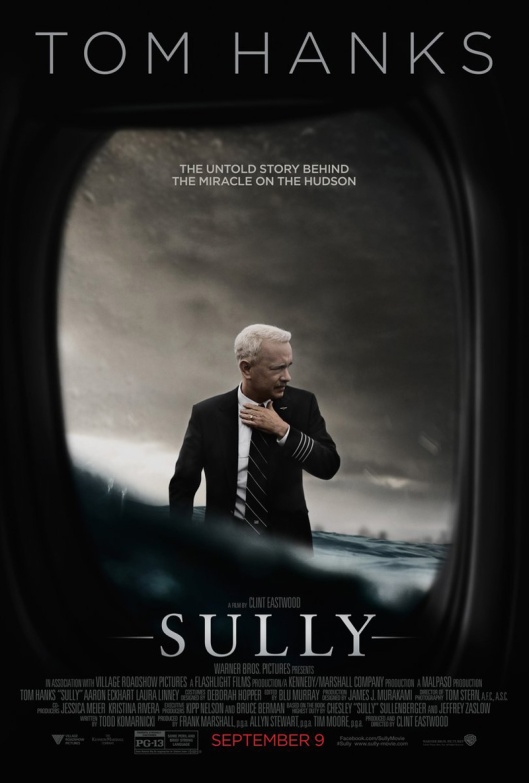 aka Sully: Miracle on the Hudson

On 15 January 2009, US Airways Flight 1549 from LaGuardia, New York to Charlotte, North Carolina, suffered a catastrophic bird strike that left both engines disabled. It had been in the air for approximately three minutes, and its pilot, Captain Chesley Sullenberger (Hanks) had to make a decision: to turn back and attempt an emergency landing at either LaGuardia or nearby Teterboro Airport, or make a forced water landing on the Hudson River. Sullenberger was certain he wouldn’t make it back to either airport and so adopted the latter option. With one hundred and fifty-five people on board, it was a manoeuvre that could have ended in tragedy, but thanks to Sullenberger’s forty year-plus experience, he was able to land the plane safely. And with the emergency services and local commercial vessels quickly on the scene, the passengers and crew were rescued in under twenty-five minutes. Later, a representative of the National Transportation Safety Board (NTSB) said that it “has to go down [as] the most successful ditching in aviation history.”

Such an event was always likely to be transferred to the big screen, and in the hands of veteran director Clint Eastwood, the story of Chesley Sullenberger and Flight 1549 has been granted a sober re-telling that suits both the man and the nature of the landing. On the surface, Sully is a movie that seems far removed from the intensity and heightened emotion of the event itself, as much of what occurs is played out against a wintry visual patina in keeping with the time the forced landing took place. But like Sullenberger himself, Eastwood – in terms of directing – has over forty years’ experience behind him, and in bringing Todd Karmanicki’s script to the screen he adopts a straitlaced, measured approach to the material that avoids any possibility of sensationalism or unnecessary hyperbole.

This is important because while the story of Flight 1549 is one of heroism on an unprecedented level – as Sully himself says at one point: “Everything is unprecedented until it happens for the first time” – the forced water landing isn’t the focus of the movie, even though we see it from two different perspectives. The focus is Sullenberger himself, a self-contained, humble man who found himself questioning his actions in the wake of the forced landing. It may seem counter-intuitive to examine the mindset of a hero suffering doubts in the aftermath of the very act that defines them as a hero, but it’s what makes Sully a much more rewarding experience than you might expect.

This decision is aided immeasurably by Hanks’s performance as Sullenberger. Anyone who’s seen Captain Phillips (2013) should remember the final scene where Phillips is being tended to by a navy medic, and the shock of what he’s been through begins to hit home. It’s a bravura moment, with Hanks’ expression telling you everything you need to know about how he’s feeling. He does the same here, brilliantly revealing the tremendous doubts Sullenberger experiences immediately following the landing and later during the NTSB investigation. As he imagines what could have happened, such as the plane crashing into the centre of Manhattan, Hanks is completely convincing as a man whose instinctive response to impending disaster saved the lives of so many. As he struggles to accept his own role in the forced landing, and what it means not just for himself and everyone else aboard, but for a wider public for whom plane crashes in New York have a whole different meaning, Hanks ensures that Sullenberger’s humility and humanity remain to the fore throughout. This is a man who wouldn’t rest until he knew everyone on board was safe and alive. 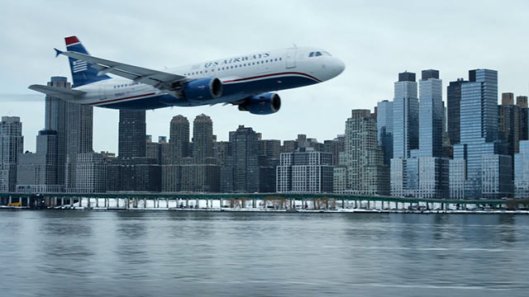 Hanks’ performance anchors the movie in a way that allows the script to explore the complex relationship between a man and his view of himself in exceptional circumstances. The actor adequately portrays the effect of the enormity of what happened on Sullenberger, and the lingering, pessimistic anxiety that threatened to undermine his self-confidence. For the purpose of the movie, that anxiety is allowed to overshadow his heroism, and through the one-sided machinations of the NTSB investigation, to be brought into question. But while Sullenberger’s heroism is never in any doubt, the NTSB investigation reveals a tactless insincerity about the nature of corporate responsibility, as it puts more faith in computer simulations that say the plane could have landed safely at LaGuardia, than the experience and knowledge of one of the best pilots around.

This is not the script or the movie’s finest hour. Demonising the Board and its representatives is the movie’s one truly sour note, a decision no doubt arrived at to offset a perceived lack of drama elsewhere. In these instances, there aren’t any bad guys, but Karmanicki ensures that the Board in this movie are emotionally hostile, professionally obtuse, and working to an unspecified agenda. It’s like watching a McCarthy hearing all over again, and Eastwood doesn’t make any attempt to downplay the Board members’ hostility to Sullenberger and his co-pilot, Jeff Skiles (Eckhart), until the error of the Board’s ways can be confirmed once and for all as both unrealistic and a poor narrative choice. 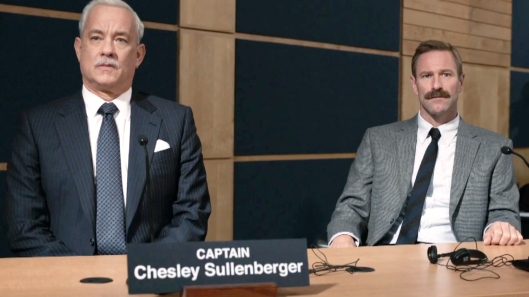 Hanks aside, this isn’t a movie where the performances are required to be more than perfunctory, although Linney as Sullenberger’s wife, Lorraine, is memorable thanks to the odd cadence of her portrayal and an underlying, yet unconfirmed, sense that all isn’t well in their marriage. As Skiles, Eckhart sports a moustache that seems to have been flown in from the Seventies, while the three-headed “monster” that is the Board (O’Malley, Sheridan and Gunn) is treated so unfairly – and so at odds with what really happened – that all three border on caricature, an unfortunate choice that doesn’t do the movie any dramatic favours.

The movie concludes with Sullenberger achieving a victory over the Board that allows for a moment of narrative grandstanding, and which is at odds with Sullenberger’s introspective nature. It also appears to offer a feelgood moment when the feelgood moment of the movie has already passed: the moment when it’s confirmed that everyone got off the plane and everyone has survived. But Eastwood uses these moments to highlight just how much of a big deal Sullenberger’s actions actually were. And why shouldn’t he be feted and applauded? To everyone outside the Board, he’s a bona fide hero, doubts and all. He’s an heroic individual, and the movies love those kind of characters (possibly) above all else. And they love them even more if they don’t automatically embrace that heroism.

Rating: 7/10 – memorable more for its examination of a man uncomfortable with the notion of being a hero than the actions that gained him that title, Sully is a muted drama that never quite “soars” in the way that audiences may expect, but which hits home in several unexpected ways instead; bolstered by a terrific, awards-worthy performance from Hanks, this is a quietly impressive movie that benefits from not embracing the standard tropes of the “hero” drama, and proves surprisingly rewarding as a result.