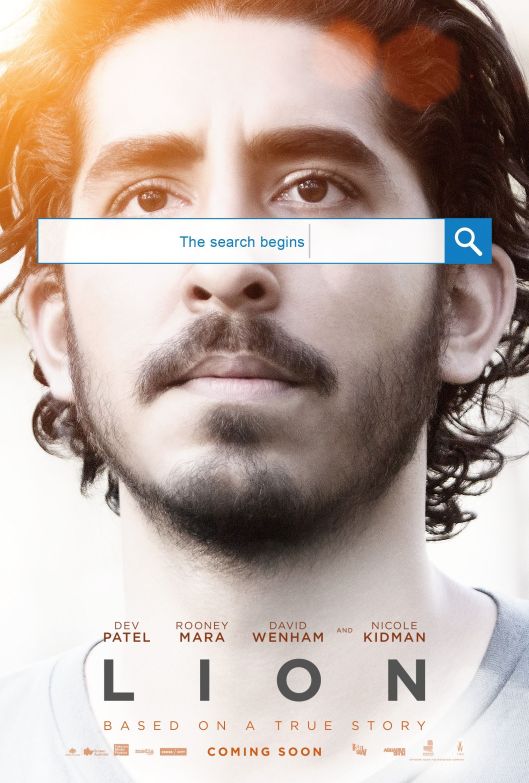 If you watch enough movies you soon learn that the world is full of inspiring true life stories where people from all walks of life overcome seemingly insurmountable odds in order to achieve a particular personal or professional goal. In 2016, movies based on true stories included the likes of Hacksaw Ridge, The Finest Hours, The Infiltrator, and Sully. And then there’s Lion, the story of a young Indian boy, Saroo (Pawar), who finds himself lost and alone in a part of India he doesn’t know, and who ends up being adopted by an Australian couple, the Brierleys (Kidman, Wenham). Twenty years later, Saroo (Patel) decides to go in search of his birth family: his older brother Guddu, his mother Kamla, and younger sister Shekila.

As expected, Lion is a movie of two halves. In the first we meet Saroo and Guddu (Bharate), brothers who steal coal from trains that they then sell on so as to be able to afford groceries. On one such mission they travel to a train station, where they end up separated. Saroo boards a train in the hope of finding Guddu, but he falls asleep. When he wakes the train is moving and he’s unable to get off until it arrives at its destination: Calcutta. Though he’s taken in by a kindly young woman, Noor (Chatterjee), Saroo flees from her home when a man she knows, Rama (Siddiqui), appears set on selling Saroo into the sex trade. Eventually, he finds himself in the care of the authorities and lodging in a children’s home. Some time later, Mrs Sood (Naval), from the Indian Society for Sponsorship and Adoption, tells him that an Australian couple want to adopt him. Saroo travels to Hobart, Tasmania, where he meets his adoptive parents, John and Sue Brierley. He settles in, and the Brierleys also adopt another orphaned Indian boy, Mantosh.

This first half is compelling stuff, due largely to Pawar’s winning presence, and the sympathy his plight elicits. From the moment Saroo falls asleep on a platform bench, and despite his brother’s instruction to stay there, it’s obvious that it’s all going to go wrong (there wouldn’t be much of a movie otherwise). But this awareness in the viewer is what makes it work so well. Watching Saroo calling for his brother – and knowing he won’t appear or answer – adds to the sense of isolation that Saroo will soon begin to feel, and it’s one of those situations we can all appreciate. And when he falls asleep on the train that will take him far away from home, it’s especially heartbreaking. As the young Saroo, Pawar’s performance is pitch perfect, his natural way in front of the camera making it easy to identify with Saroo and hope that he doesn’t come to any harm. Pawar plays him as a cheeky, happy-go-lucky child at first, but when things become more serious, he’s more than able to display the sadness and dismay inherent in Saroo’s situation.

In the second half, Saroo is now studying hotel management in Melbourne, and begins a relationship with fellow student, Lucy (Mara). At a party with friends, Saroo experiences a flashback to his childhood, and it proves to be the first of many. Lucy and his friends suggest he uses Google Earth to try and find his hometown in India. But the town name he remembers doesn’t exist, and the only memory he has of the station where he last saw Guddu is that there was a rain tower there, something not uncommon at Indian railway stations. As his search continues, and with less and less luck or progress as time goes by, Saroo’s relationship with Lucy begins to suffer. Eventually, Saroo finds a clue on Google Earth that points him in the right direction, and brings the prospect of finding his Indian family even closer. 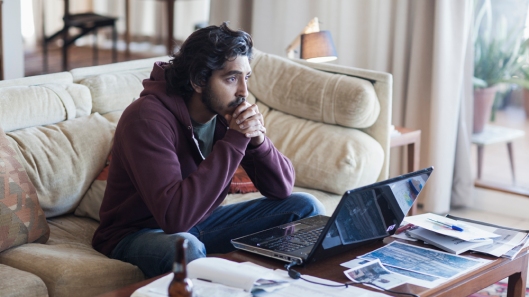 With the movie’s first half proving so compelling and so emotionally effective, it becomes something of a surprise when the second half appears to be doing its best to undo all the good work of the first. As an adult, Saroo’s floppy-haired, well-liked personality soon gives way to miserable, semi-tortured whinger as his efforts to find his birth family fail to provide the results he wants, and his disappointment causes him to treat Lucy like a stranger, and his adopted brother Mantosh (Ladwa) with callous disregard. It’s this transition that doesn’t make sense dramatically, and it’s an issue that Luke Davies’ otherwise exemplary script never addresses satisfactorily. The why of Saroo’s change in behaviour may well be due to accrued frustration, but why he should deliberately jeopardise his relationships with those closest to him remains a mystery, one greater than if he’ll succeed in his search. Not even Patel, normally a perceptive and thoughtful actor, can’t make anything of this turnaround, and for a long stretch any sympathy for the character that the viewer has, is in danger of being lost for good.

The second half is also where the script trots out too many subplots that don’t always add up to a coherent whole. Mantosh is seen as having issues surrounding his role in the Brierley family, but the reasons for these are never explained, while the reason for the Brierleys having adopted two Indian boys instead of having their own children is given at a point where Sue’s health is precarious. Sue’s health issues, though, are left hanging so that Saroo can head off to India with her encouragement and blessing, but not with anything resembling a backward glance. The whole pace of the second half is off as a result of these narrative fumbles, and some scenes feel as if they should have been excised in favour of a shorter, yet more dramatically sound approach. When you lose interest in the main character’s search or journey because of how he behaves, then you know the movie’s doing something wrong.

Making his feature debut, Garth Davis makes the most of the Indian settings, painting a portrait of life as seen through the eyes of the young Saroo – a world full of wonder (a kaleidoscope of butterflies, the taste of a cold fizzy drink), and a world full of danger (predatory sex traffickers). Davis is on solid ground here, depicting Saroo’s journey with heart and compassion, and making it clear just how lucky Saroo was to be adopted. Many of the scenes in Calcutta show Saroo surrounded quite literally by the rush and press of its populace, but Davis is quick to show just how isolated he is at the same time. And he follows through with this idea with the adult Saroo, but instead of Saroo becoming isolated through the vagaries of Fate, this time he becomes isolated because of what he does. It reinforces the idea of Saroo not being settled in terms of his heritage and the connection he has with his past; he doesn’t want to continue being adrift.

Visually, Lion is often impressive to watch, alternating between the brooding, teeming city life of Calcutta, and the bright open spaces of Melbourne. Greig Fraser’s cinematography catches the mood precisely, his use of close ups in particular adding to the resonance of the story. Of course, those close ups wouldn’t be entirely as effective if it weren’t for the quality of the acting. As mentioned above, Patel has problems making Saroo credible in terms of his behaviour, but does a good job nevertheless. Mara makes a minimal impression because, one scene aside, her character is the standard girlfriend seen in too many other movies. As the Brierleys, Wenham is sidelined in favour of Kidman’s sterling performance, one that sees her regain some of the critical favour she’s lost in recent years. But if the movie “belongs” to anyone in the cast, it’s young Pawar, whose sweet, angelic features are difficult to resist, and even harder to ignore. Without him, Lion would not be as powerful as it is, or as rewarding.

Rating: 7/10 – let down by a second half that isn’t as focused as its first, Lion is still worth watching, but not as much as its various awards nominations – and wins – would have you believe; a true story that at least doesn’t preach to its audience, its tale is a remarkable one but in this version, not one that will necessarily linger too long in the memory.