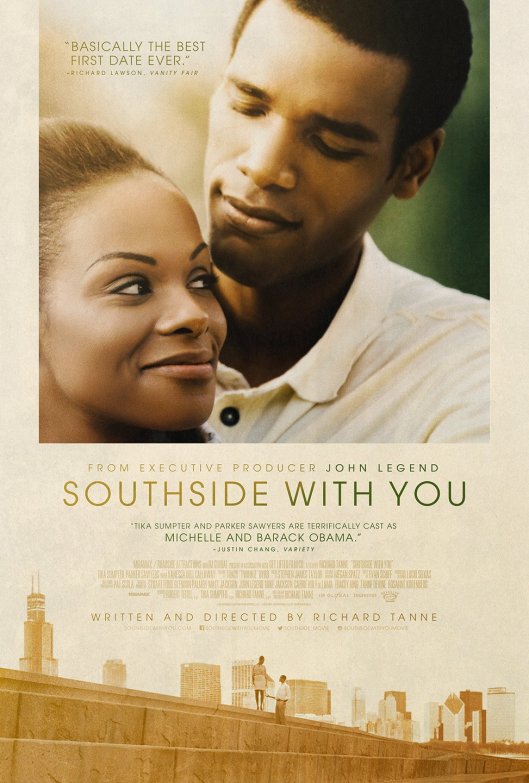 It’s 1989, and Michelle Robinson (Sumpter), a young lawyer with a firm in Chicago, is preparing to spend the afternoon with an associate who she’s mentoring. The young associate’s name is Barack Obama (Sawyers), and while Michelle’s parents (Calloway, Van Lear) tease her about it, she insists she’s not going on a date. When Barack arrives to pick her up, he’s late, there’s a hole in the passenger footwell of his car, and it’s clear that he smokes (which Michelle isn’t too keen on). And she learns that the community meeting he’s invited her to attend with him, isn’t until much later. Taking a further stand with Barack, she tells him they’re not on a date. He agrees (reluctantly), but adds that it won’t be a date until Michelle says so.

With time to kill, the pair attend an exhibition at a local arts centre. As they look at and voice their feelings about the artwork on display – by the artist Ernie Barnes – slowly but surely they begin to learn about each other. Michelle warms to Barack (though not too quickly), while he is obviously attracted to her. They talk about their backgrounds, make snap judgments about each other, and generally discover they have a liking for each other that Michelle, at least, is surprised by. From the arts centre, they go for a walk in the park, talk some more about their families, and in particular, Barack’s relationship with his mother and father. 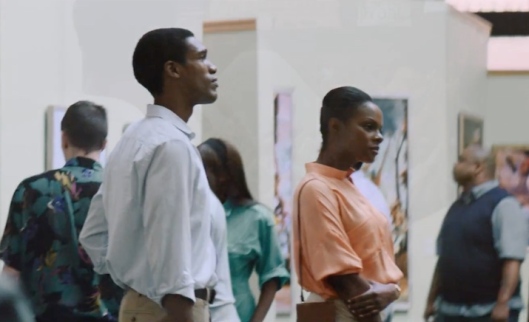 At the community meeting, Michelle witnesses Barack take on the role of confident, impassioned orator, as he takes up an issue that’s causing the community to feel disparaged. He encourages them to look at things from a different perspective. Afterwards, Michelle tells Barack how impressed she was – even if it did seem like a set up, what with her being there. Barack admits he may have hoped for such an outcome, but instead of taking him to task – as she would have done earlier in the day – Michelle appears to be okay with his minor subterfuge.

The two have dinner, and learn more about each other’s religious leanings, before attending a screening of Spike Lee’s Do the Right Thing. As they leave, Michelle is temporarily by herself, and she meets one of the partners at her law firm, Avery Goodman (McElroy), and his wife (Monday). When he asks her why one of the characters in the movie acted in the way that he did, she’s lost for an answer. When Barack reappears, he has an answer for Avery’s question. Avery is impressed, and suggests to Michelle that she ensure Barack’s time at the firm is beneficial. When they’re by themselves again, Michelle rounds on Barack and tells him why this should never have been a date: because of how it would look at the firm. Chastened, Barack takes Michelle home, but not before he makes one last stop… 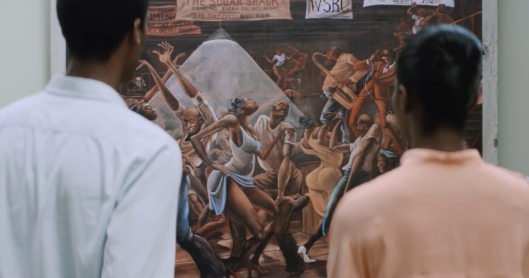 It’s such an obvious conceit – show the first date between two famous people (and before they were famous) – that it’s somewhat surprising that it hasn’t been done before. A project begun by writer/director Richard Tanne back in 2007, Southside With You is a warm, big-hearted piece of romantic conjecture: what would that first date between Barack Obama and Michelle Robinson have been like? Would they have hit it off straight away, or would they have discovered a common enmity, a hurdle too big to overcome at the first attempt? The latter seems to be the case early on, what with Michelle’s refusing to classify their going out together as a “date”, while Barack’s oh-so-puppy-dog approach doesn’t appear to be gaining any traction either.

One of the things that makes this imagining of real life events so charming is its refusal to litter the script with presentiments of the future, those moments when (usually) dialogue hints at greater things to come. Even the one time that Michelle suggests Barack try his hand at politics, it’s all said and done with in a matter of seconds. The movie remains firmly in the here and now of 1989, never deviating from its carefully constructed sense of time and place, and keeping its two main characters anchored to their lives as they were then. This leads to a raft of information about the movie’s prospective lovebirds that most people won’t be aware of, such as Barack’s father dying at the relatively young age of forty-six, or that Michelle was living at home to help with her father, who has MS. 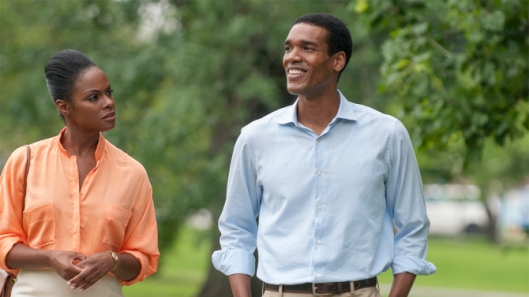 Their verbal sparring, an often witty joust between two fiercely intelligent people certain (for the most part) about their place in the world, informs most of the movie’s running time, and makes for some spirited exchanges between the two. It’s here that the performances sparkle and come into their own, with Sumpter’s slightly waspish turn as Michelle slowly softening as the movie progresses. As she lowers her guard thanks to Barack’s easy-going presence, Michelle becomes more relaxed – and more likeable. It’s an impressive performance, subtly shaded for the most part, and hopefully will allow Sumpter the opportunity to take on more high profile roles in the future. But good as she is, it’s Sawyers’ performance as Barack “O-what-a” that holds the attention. Looking a good deal like the real Barack Obama, and sounding exactly like him, inflections and all, Sawyers inhabits the role with ease, avoiding any possible accusations of mimicry and providing viewers with a fully-rounded portrayal of a young man hoping to convince his “date” that that’s exactly what she is.

Tanne takes full advantage of his lead actors’ skill in their roles, and lets them do all the “hard” work, while he orchestrates things with deceptive ease. The time he’s spent writing and refining Southside With You has clearly paid off, and the simplicity of it all adds immeasurably to the movie’s charm and appeal. With a warmth to its cinematography – courtesy of Patrick Scola – and a winsome, winning score by Stephen James Taylor, the movie is a pleasure to watch from start to finish. The only question that remains is what Barack and Michelle think of the movie. They do have a copy…

Rating: 9/10 – with two standout performances from Sumpter and Sawyers, and a precision-tooled script, Southside With You entrances and beguiles in equal measure; a romantic drama with heart and soul, as well as humour, it’s the kind of low budget indie movie that wins heaps of praise, but is seen by very few – and in this case, that’s a crime, pure and simple.