Sometimes, a movie arrives with very little fanfare or advance notice (in comparison to the supposed blockbusters of the day), and features a cast that makes the average viewer say to themselves, “Wow! What a cast! This movie’s got to be good!” Collateral Beauty is one of those movies, with its dream cast in service to a story that deals with unyielding grief, and which does so by employing magical realism as its main approach to telling the story. It’s meant to be an uplifting, emotionally dexterous movie – set at Xmas – that will leave viewers with a warm glow in their heart as they leave the cinema.

Alas, Collateral Beauty – and despite the best efforts of its dream cast – isn’t actually that movie. What it is, is a tragedy wrapped up in a comedy wrapped up in a magical realist fantasy wrapped up in an awkwardly staged feelbad movie. It’s a movie that revels in the pain and suffering of a group of individuals who are the very definition of stock characters. Some effort has been made with Smith’s character, a marketing executive whose six year old daughter has recently died from brain cancer. Unable to let go of his grief (and not really wanting to), Howard still shows up for work but spends his time creating elaborate domino structures and neglecting the business he built up with best friend, Whit (Norton). With the company on the brink of losing their biggest contract thanks to Howard having “zoned out”, Whit needs to prove to a prospective buyer that Howard, who has the controlling interest, is sufficiently non compos mentis for the sale to go ahead without his involvement.

But how to prove this? How, indeed. The answer arrives, like a gift from Heaven, in the form of budding actress Amy (Knightley). Through a process too unlikely to relate here, he hires Amy and her friends, Brigitte (Mirren) and Raffi (Latimore) to act as Love, Death and Time respectively, concepts that Howard has been writing to. Yes, Howard has been railing against Love, Death and Time for stealing his daughter away from him. Whit’s idea is for the trio to pop up at random and talk to Howard in various public places. These encounters will be filmed by a private investigator (Dowd), and the actors removed digitally before the footage is shown to the buyer, thus making Howard seem, at the very least, delusional, or at worst, completely bonkers.

Now, the thing to remember here is that Whit, along with his colleagues, Claire (Winslet) and Simon (Peña), is Howard’s friend. Let’s let that sink in for a moment. His friend. Who with Claire and Simon decides to play charades with a man whose grief is all-consuming and all in order to save the company where they all work. They want to do this not, in the first place, to help Howard deal with his grief, but so that they can save their jobs. And this is meant to be a good idea, both in practice and as the basis for a movie.

But not content with having them play mind games with their boss, the script also gives them their own problems to deal with. Whit has a young daughter who hates him because he had an affair that led to her parents’ divorce (as she puts it, he broke her heart). Claire has sacrificed her longing for a child in order to be successful at work. And Simon, who has fought off a serious illness twice before, is having to face up to the possibility that the third time might not be the charm. Throw in Naomie Harris’s grief counsellor, Madeleine (the only person Howard seems able to talk to about how he feels), who has also lost a daughter, and you have a group of people you’d cross the room to avoid at a feelgood seminar. They do glum with a capital G-L-U-M, and each time the script – by Allan Loeb, who has penned such classics as Here Comes the Boom (2012) and Just Go With It (2011) – indulges in their suffering it does so in a way that’s detrimental to the central storyline: Howard and his grief.

There’s also the problem of the movie’s tone. Collateral Beauty is about death, and the sorrow felt and experienced by the people left behind; it’s also about how grief can twist and contort feelings of pain and guilt into something much more violent and harmful. But Loeb’s script doesn’t want to address these issues head on, as quite rightly, this would make the movie a bit of a downer (and then some). So instead of making a straight-up drama about grief and loss, Frankel et al have made a middling comedy about grief and loss. While the themes in play remain serious, they’re all dusted with a light-hearted sheen that never feels right and never sounds right. The comedy elements distract from the drama of the piece, and in such an awkward, “oh no, they didn’t” way as to be confusing to the viewer. Is this a drama about grief, or a comedy about grief? But there’s no point in asking, as the movie doesn’t know any more than anyone else does.

With the whole premise undermined from the very beginning, Collateral Beauty becomes an exercise in perpetual wincing. When actors of the calibre of Norton and Winslet can’t make the material work then it’s time to head home and call it a day. Scenes come and go that make no sense dramatically, but seem intended to provide a level playing field for all the cast so they have enough moments to add to their showreels. As the actors with no background in psychotherapy but given carte blanche to say anything they can think of, Mirren, Knightley and Latimore are acceptable, but rarely do anything that takes them out of their thespian comfort zones (there’s also a suspicion that Mirren is playing a version of herself that fans have come to expect rather than an actual character). 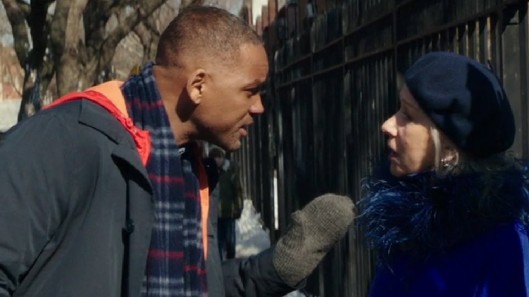 Smith at least tries to inject some much needed dramatic energy into his role, but until the very end, when Howard is required to undergo an about face because the script needs him to, he’s held back by the script’s decision to make him appear either vague or angry (or sometimes, vaguely angry). Norton and Winslet coast along for long stretches, and a restrained Harris is the voice of wisdom that Howard desperately needs to hear. That leaves Peña, whose performance elicits some real sympathy late on in the movie, and who proves once again that he’s a talented actor who needs to be given better opportunities and roles than this one.

Overseeing it all is Frankel, whose previous movies include Marley & Me (2008) and Hope Springs (2012). You can understand why he got the job, but with the script unable to decide what approach it wants to take, Frankel is left stranded and unable to find an effective through-line with which to link everything together. It never feels as if he’s got a firm grasp on the narrative, or any of the underlying subtleties that Loeb’s script managed to sneak in when the writer wasn’t looking. In the end, he settles for a perfunctory directing style that keeps things moving along on an even keel but which doesn’t allow for anything out of the ordinary to happen. There’s no real dramatic ebb and flow here, and sadly, like so many other directors out there today, he’s not able to overcome something that is one of the movie’s biggest flaws.

Rating: 4/10 – near enough to “meh” as to be on close, personal speaking terms, Collateral Beauty is bogged down by its schizophrenic script, and an over-developed propensity for ridiculousness; rarely has magical realism felt so false or poorly staged, and rarely has a movie about grief instilled the same feeling in its audience for having seen it in the first place.