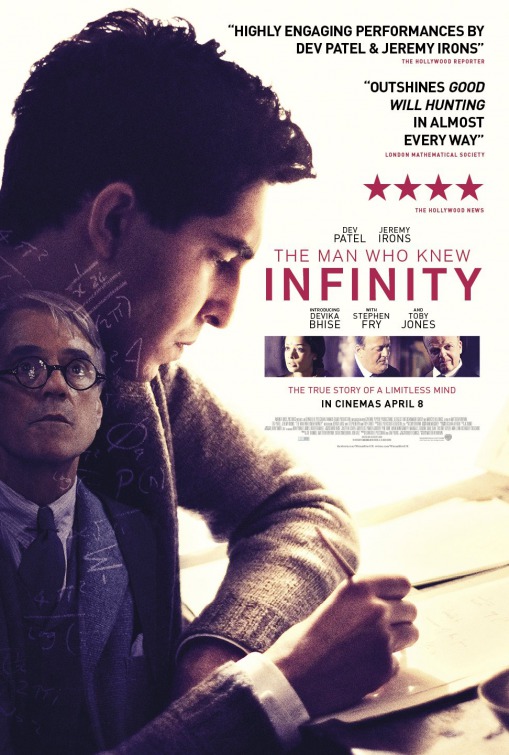 Madras, India, 1914. Humble clerk Srinivasa Ramanujan (Patel) has a special affinity for mathematics; he can see formulas in his head, and he can write them down without having to pause or check what he’s writing. Spurred on by his employer, he writes to the British mathematician, and professor at Trinity College, Cambridge, G.H. Hardy (Irons). Hardy is impressed enough to pay for Ramanujan’s passage to England, and with a promise of ensuring the young Indian’s work is published. Once at the college however, Ramanujan finds himself pressed to explain just how his formulas work. Hardy needs him to provide “proofs” – how he works things out – but at first it’s an alien concept that Ramanujan fights against.

Back in Madras, Ramanujan’s wife, Janaki (Bhise) is reliant on his letters for news of when she can travel to be with him. But his jealous mother, Narasimha (Joshi), hides his letters and confiscates hers. In England, his wife’s apparent silence adds to his further woes: experiencing institutionalised racism, the delays in being published, and the onset of tuberculosis. As he struggles to meet the demands that Hardy imposes, Ramanujan begins to feel despair at the thought that all his theories and formulas will die with him. It’s only when he and Hardy challenge another member of the faculty, Major MacMahon (McNally), over partitions, that his work begins to be recognised, and his position as a gifted mathematician is guaranteed. 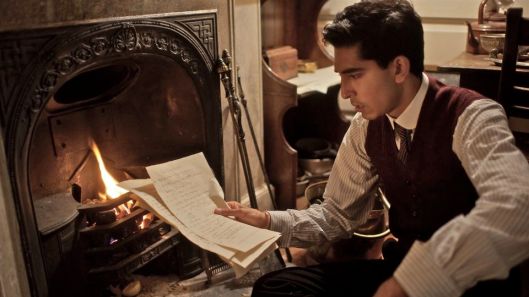 A true story about a most remarkable man, The Man Who Knew Infinity is a fairly standard biopic that benefits greatly from the participation of Patel and Irons, both of whom give strong, inspiring performances, and from the work of production designer Luciana Arrighi Rajeevan, who recreates the period covering World War I with style and attention to detail. Beyond this, though, this is very much a standard tale of one remarkable man’s struggle to be heard and understood against an environment that appears unable to entertain original thought. There are many such stories throughout history, and many have been into serviceable movies, and while The Man Who Knew Infinity is certainly an interesting story, it’s too similar to many other stories to have much of an impact.

Partly this is due to the period of time over which the movie takes place – six years – which leaves the narrative necessarily fragmented. As a result, Ramanujan’s story feels incomplete, with too many scenes that are replays of earlier ones (Hardy’s insistence on proofs is played out on several occasions). The movie isn’t too subtle in depicting the racism of the time, doling out exactly the kind of scenes you’d expect to see in a movie such as this – Ramanujan is verbally abused, physically assaulted, and generally despised by the majority of the teaching staff – and there’s the classic movie moment where after a number of scenes where Ramanujan is prone to coughing fits, he finally coughs up blood into a handkerchief. Watching the movie, you can practically predict every beat of the narrative, and every advance in the material. But on a basic level it remains entirely watchable – just don’t expect too much from it.

Rating: 6/10 – an inspiring tale told with a minimum of passion, The Man Who Knew Infinity relies on a number of biopic clichés in telling its story, and in doing so, dulls the drama inherent in Ramanujan’s life; boasting two clever, intelligent central performances, and often glorious cinematography by Larry Smith, the movie feels as if it was aiming for more, but didn’t quite have the resources to achieve it – but at least it tried.