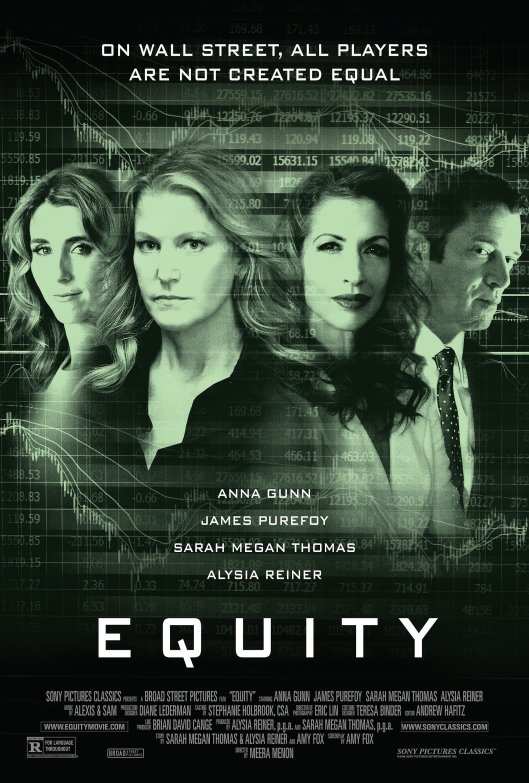 When an Initial Public Offering (IPO) (or stock market launch) that she’s brokering goes badly wrong, investment banker Naomi Bishop (Gunn) finds herself within touching distance of the glass ceiling. Passed over for promotion because of the launch’s failure, Naomi is further rankled by her boss’s assertion that the deal didn’t work out because she ruffled a few feathers. Given another project to work on – the launch of a privacy company called Cachet – she finds her rapport with the company’s owner, Ed (Roukin), tested early on, and the project is saved from potential disaster by the timely intervention of Naomi’s assistant, Erin Manning (Thomas). Realising what an asset she has, Naomi uses Erin to keep Ed happy.

Meanwhile, Naomi’s boyfriend, broker Michael Connor (Purefoy), is in need of an insider tip that he can pass on to old friend and businessman Benji Akers (Bierko). When he learns about Cachet, Michael tries to find out what he can about the company, but Naomi is tight-lipped about it. Later he tries to look around on her phone but her password defeats him. Also at this time, Naomi runs into an old friend, Samantha Ryan (Reiner). What seems to be an unexpected but pleasant reunion is soon revealed to be a ploy on Samantha’s part: she’s part of a government team investigating both Michael and Benji. When Naomi realises this, she refuses to cooperate. 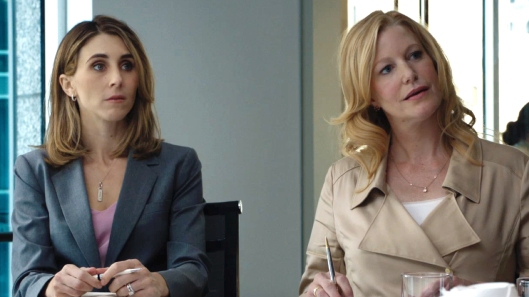 As the day of the IPO approaches, Naomi learns that Cachet, far from being the heavily firewalled company that Ed brags it is, is at risk from hackers. This leads to Ed questioning Naomi’s confidence in the IPO, and beginning to have second thoughts about working with her. Erin is told to keep him “sweet”, and she manages to do so, keeping the deal alive. When Erin learns that the person who warned Naomi about the risk of Cachet being hacked has been fired, she tries to get hold of Naomi to tell her. Unable to, she ends up at Michael’s apartment, where she makes a decision that will have far-reaching consequences not just for Naomi, but for Michael, for Samantha, for Cachet, and for Erin herself.

A movie created, developed and assembled by women, and which features women in almost every role you can think of, Equity is a movie that, thanks to its female-centric provenance, comes loaded down with anticipation and a lot to prove. The world of investment banking has a male-dominated heirarchy that makes it difficult for a woman to succeed in the same way that a man does. As Naomi discovers, one mistake, one project that doesn’t go as planned, and the knives are out, with even colleagues adopting a “dead (wo)man walking” approach to their interactions with her. Using this as the backdrop for a tale riddled with deceit, backstabbing and betrayal, the movie attempts to make Naomi the heroine – unfairly treated, a little naïve despite her position and experience, and working within a personal ethical framework that her colleagues don’t seem to share or understand. It’s the age-old question: can a woman succeed in a man’s world?

For a movie that sings the praises of female empowerment, and presents us with a trio of female characters, each with their own individual sense of entitlement, Equity can’t seem to make up its mind what to do with them. When we first meet Naomi she’s a strong, charismatic woman who’s close to the top of her profession, but it’s not long before the cracks begin to show and she’s running just to stand still. Similarly, Samantha’s determination to bring a case against Benji and Michael sees her chase down leads using guile and no small amount of ingenuity, but as soon as she gets bogged down and her investigation grinds to a halt, she doesn’t know what to do next. Only Erin seems to have a game plan that works, and where she ends up is perhaps indicative of the answer the movie itself is plumping for: yes, women can succeed in a man’s world, but they have to behave like men in order to do so.

Ultimately, Amy Fox’s screenplay – from a story by Fox, Thomas and Reiner – lacks focus and contains some astonishingly lame dialogue, particularly the scene where Samantha “seduces” Benji’s right-hand man, Cory (Corddry) (you will cringe; seriously, you will cringe). There’s also no one in the movie who is even remotely sympathetic, making it difficult to care about anyone, even Naomi, who by the movie’s end should have won over the audience thanks to the predicament she ends up in, but who remains a character you can easily forget about five minutes after the movie’s over. From all this it’s unclear just what message the movie is trying to get across, or even how important it is. Is it asking us to consider whether women should compete with men in the land of IPO’s, or is it that the movie believes women should compete, just as long as they leave their feminine principles at home?

Gender issues aside, there are efforts to make this into a thriller, but these aren’t very convincing, as it all boils down to whether or not the knowledge that Cachet is hackable will affect the share price on the first day of trading (it’s that exciting). But as we already know what’s happened up to this point, and the script has conveniently spelled it all out for us, the issue of the share price becomes just another glum moment in an overly glum movie. Thanks to the script, the performances lack depth, and for the most part, any appreciable energy. In the last third, Gunn defaults to a perplexed expression that apparently explains how Naomi is feeling in every scene she’s in, while Reiner falls back on dismay at every opportunity (as well she might). But it’s Thomas who really lets the side down, adopting a wide-eyed, “who me?” approach to Erin that makes her look like she’s either on drugs, or is just a few seconds behind everyone else. As for Purefoy, he could have phoned in his performance and it wouldn’t have looked or sounded any different, such is his obvious boredom in the role.

In the director’s chair, Meera Menon does what she can to make the movie look and feel more important than it is, but the material works against her too often for her to make much out of it at all. Scenes come and go with no great acclaim, and the various “twists and turns” can be seen coming from a mile off. The movie also struggles to find its own rhythm, with Andrew Hafitz’ editing making the movie look as if it’s been pared down from a longer cut. There’s the germ of a good idea here, but the execution of it leaves much to be desired, from Erin’s pregnancy which has no bearing on anything, to Samantha’s already discussed “seduction” scene, to Naomi yelling at her boss, “When is it going to be my year?” Sadly for Naomi, and the movie, it’s not 2016.

Rating: 5/10 – moderately engaging but increasingly mired in mediocrity overlaid with a bland sensibility that it can’t overcome, Equity isn’t the gender equality triumph its makers were perhaps hoping for; dramatically flaccid for long stretches but still watchable, the movie struggles most with its trio of central female characters, a mistake that the makers appear to have made no effort to curtail, leaving the audience with no one to care about, or root for.