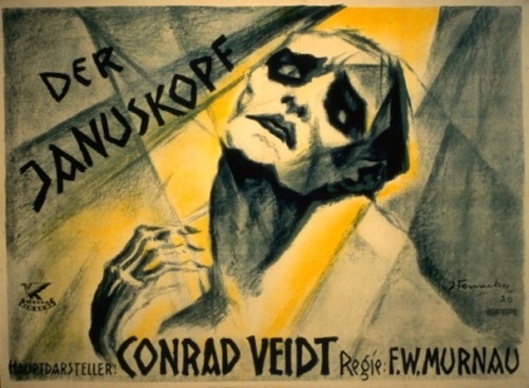 If you haven’t heard of Der Januskopf, then it’s not entirely surprising. Despite being directed by F.W. Murnau, with cinematography by Karl Freund, and starring Conrad Veidt (all at the height of their powers), this thinly disguised version of Robert Louis Stevenson’s The Strange Case of Dr. Jekyll and Mr. Hyde hasn’t been seen since its initial release, and is now considered a lost movie. While we’re unlikely to ever see the movie, especially after all this time, what we do have is its poster, and one that shows another creative artist working at the peak of their powers.

Josef Fenneker – whose signature can be seen near the bottom right hand corner – was a prolific designer and illustrator whose work in Berlin had already won him great acclaim before he was approached to create the poster for Murnau’s “appropriation” of Stevenson’s novel. It’s a typical Fenneker poster, with Veidt’s already angular features highlighted and exaggerated by sharp, slashing lines and deep, troubling shadows. His eyes are distorted so that they don’t look fully formed, or are undergoing some kind of violent transformation (hmmm…). Veidt’s forehead, usually curving and soft, is represented by two angular planes of flesh that look as if they’ve been joined together haphazardly, with no regard for symmetry. Or maybe the bones beneath them are splitting and fusing, and that’s causing the distortion. Whichever it is, one thing is clear from Veidt’s anguished expression: it’s painful.

And yet, Veidt’s face isn’t all tortured flesh and bone. His lips, fully bee-stung and tapering at one corner to a point that could impale someone if they weren’t careful. They’re full, tempting, at odds with the rest of Veidt’s features, inviting even, a feminine pout that tempers Veidt’s expression of pain and which proves hard to avoid looking at. But then his jaw line reflects that agony again, jagged in its delineation, and almost as if Fenneker has made slicing motions with his brush in order to get the full effect.

Below that jaw line is a surprise, a throat so distended and goitre-like it acts as a further horrible reminder that Veidt – or at least his character, Dr Warren – is undergoing a terrible change in appearance. It’s almost as if his alter ego, the villainous Mr O’Connor, is making his way up and out, and will be forcing Veidt’s strikingly realised lips wide apart in his efforts to be free (what kind of monster is going to be revealed?). But almost as if this amount of horror isn’t enough, there’s also the shock of seeing Veidt’s hand, reduced to cadaverous bones and reaching out as if to claw his throat open and release the beast within.

With Veidt’s on-screen character so grotesquely depicted – contemporary audiences would most likely have been horrified by Fenneker’s creation – all that’s left is to provide a suitable background for the central image. Using swathes of yellow and grey to paint an unhealthy miasma around Veidt, the effect is of a man not only enduring a terrible (and terrifying) physical transformation, but having to do so while surrounded by an atmosphere that seems to exemplify sickness and disease. Or maybe it’s meant to represent that curiously German concept of schadenfreude, and the colours have been chosen to represent the character’s emotional and intellectual turmoil. Whichever view is right – indeed, if either of them are – Fenneker’s poster remains a startling, arresting work of art, and a testament to his prowess as an interpreter of German silent cinema.

NOTE: There’ll be more from Josef Fenneker throughout February 2017.