The career of Nicholas Kim Coppola has had its fair share of ups and downs (though in recent years it’s consisted mostly of downs). Inhabiting the strange netherworld of DtV movies nowadays, Cage seems to be flitting from one career-killing project to another with no apparent concern for his legacy as an actor (something that could be attributed to a lot of other actors as well – eh, John Travolta?). But overall, Cage has had a great career, and appeared in several modern classics over the years, and this is reflected in the movies that make up the list below (though it doesn’t include his Oscar win for Leaving Las Vegas (1995). The most recent movie in the list is an unexpected success from 2013, but his recent cameo in Snowden (2016) and a well-received outing in Army of One (2016) are, hopefully, signs that the tide is turning. Cage has six movies due for release in 2017, but if none of them improve his standing, we’ll still have all these (mostly) great movies to remember him by.

Surprisingly enjoyable on a “don’t-expect-too-much” level, Cage enters into the spirit of things (along with a wonderfully hissable Alfred Molina as the villain) in this barmy fantasy movie. As the ever-so-slightly po-faced Balthazar, Cage has to make one too many trips to Exposition Central, but acquits himself well in a role that could have been played oh-so-seriously. The movie has its fans, and if you haven’t seen it yet, it’s well worth seeking out as an undemanding treat.

After making the very downbeat Leaving Las Vegas, Cage surprised everyone by making a string of big-budget, high-concept action movies, including this riotous romp where he plays the one good guy on a prison transport plane full of murderers, rapists,  thieves, and Steve Buscemi. Cage goes for laconic, brooding and ironically mirthless (“Put… the bunny… back… in the box”), and cements the action credentials he established for himself in The Rock. He’s the calm at the centre of the storm, and all the more convincing for it.

The first of two outings as stunt motorcyclist turned demonic revenger Johnny Blaze, Ghost Rider sees Cage play the flame-headed title character against the backdrop of an increasingly silly script, and a lacklustre plot. But against the odds, Cage’s interpretation of the character works better than expected, and his understanding of the role lends some gravitas when it’s most needed, making this a definite guilty pleasure, and whether you’re a Marvel fan or not.

Cage saw in the new century with this remake of H.B. Halicki’s 1974 counter-culture classic, but somewhere along the way it failed to replicate what made the original so memorable. Cage gives an unremarkable performance, and the movie’s surface sheen hides a superficial storyline that no amount of slickly produced car chases can hide. That it did so well at the box office is a testament to Cage’s popularity at the time, and a vigorous marketing campaign that promised more than the movie could actually deliver.

John Woo given (nearly) free rein + Nicolas Cage + John Travolta + more mayhem and carnage than you can shake a church full of doves at = an even barmier and over the top movie than The Rock. Face/Off is one of the maddest, strangest, but totally enjoyable action movies of the Nineties. Woo directs as if he doesn’t care how looney it all is, and Cage – along with his future DtV compatriot Travolta – goes along for the ride, hamming it up as much as he can and having a whale of a time. He’s out there, and he wants you to come with him… and how can you refuse?

Cage has contributed his vocal talents to a handful of other movies, but his role as Speckles the mole in G-Force may just be his goofiest performance yet. And it’s made all the more impressive by the fact that, for the most part, it doesn’t even sound like it’s Cage. A kids’ movie that doesn’t try too hard with its script, it’s nevertheless a minor pleasure, and has enough wit about it to offset the unnecessarily convoluted nature of the central plot.

The first of Cage’s forays into the action movie genre, The Rock gave him a new lease of life on the big screen, and brought him to the attention of a whole new audience. Beginning as a nerd but inevitably transforming into a kick-ass action hero, it’s obvious that Cage is having fun with his role, and this transfers itself to the viewer. Rarely have the gung ho endeavours of an unprepared yet adaptable rookie been so coated in so many levels of ridiculousness, and rarely has an actor proved so effective in carrying it all off as if they were born to it.

An action-adventure movie that came out of nowhere and proved unexpectedly successful, National Treasure takes the template that has made Dan Brown such a household name, and tweaks it so that it’s fun and not at all pompous in its self-important outlook. Cage revisits his action hero period but makes his character more like Indiana Jones than Cameron Poe, and in doing so gives one of his loosest, most enjoyably Cage-like performances in years. The plot is suitably daft, but who cares when the aim is to have as much fun as possible? Certainly not this movie, as it revels in its absurdity from start to finish, and continually winks at the audience to reassure them that, for once, it is all just an act.

A sequel to National Treasure was perhaps inevitable, but what wasn’t as predictable was said sequel out-grossing its predecessor. More convoluted than the original, but lacking the flair that made the first movie so enjoyable, the movie bounces from one absurdist set piece to another with galling regularity, but somehow still manages to keep the audience on board, a feat that is the one thing that makes this poorly constructed – and thought out – sequel as successful as it is.

An animated movie about a family of Neanderthals with Cage as its male figurehead? A surefire box office success? Unlikely on the face of it, but that’s what happened as audiences took the Crood family to their hearts, and gave Cage his most unexpected hit to date. As in G-Force, Cage shows an aptitude for voice work that makes his role all the more enjoyable, and he finds various and varied ways to display the character’s frustration at continually being ignored by his family. Cage sounds relaxed in the role, and is clearly having fun, an experience his fans haven’t had for quite some time – since this movie, in fact. 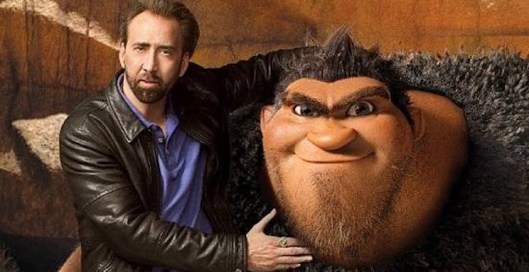