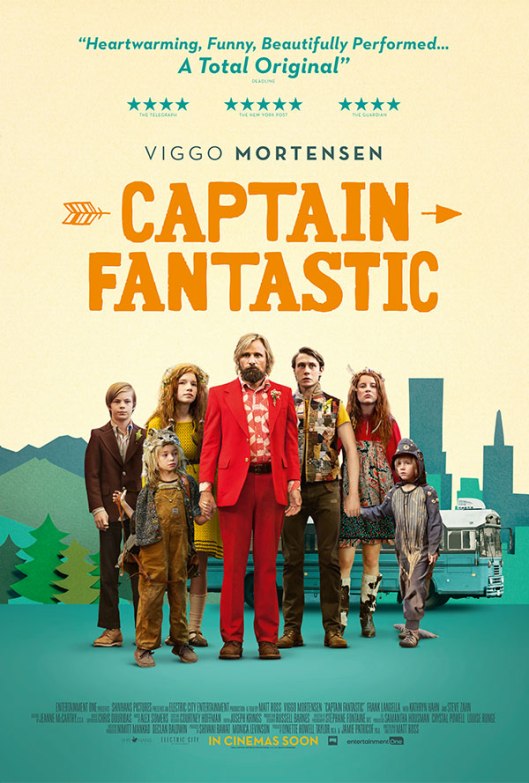 Parents inevitably want the best for their kids, but equally inevitably, are never quite sure if their kids are getting the best. While most children go through whatever state education system is available to them, there are some who are home schooled, whether it’s a lifestyle choice determined by their parents, or a matter of their culture or social background. In Matt Ross’s charming and idiosyncratic Captain Fantastic, we’re able to see both sides of the coin, and also see the pros and cons of a conventional upbringing, and the pros and cons of an unconventional upbringing. Which is best? That’s up to the viewer to decide.

Ben Cash (Mortensen) and his wife, Leslie (Miller), have elected to raise their six children – Bodevan “Bo” (MacKay), Kielyr (Isler), Vespyr (Basso), Rellian (Hamilton), Zaja (Crooks), and Nai (Shotwell) – in the mountains of Washington state. As the movie opens, Leslie is in hospital, and nobody knows when she’ll be home. In the meantime, Ben continues instructing their children through mental and physical exercises and tests that are designed to make them smarter and fitter than most children of their respected ages. But while he and Bo are on a trip to the nearest town, Ben learns that Leslie has died. He tells the children the exact circumstances of their mother’s death, and for a while they are all visibly upset. But they soon rally round thanks to Ben ensuring that their normal routine isn’t altered.

Matters are complicated by Leslie’s father, Jack (Langella), refusing to acknowledge his daughter’s wish to be cremated, and threatening to have Ben arrested if he shows up at the funeral. The children want to go however, and persuade their father to ignore their grandfather’s dictates. They set off on their first ever road trip, heading for Mexico, with the children getting their first real glimpses of the wider world. On the way, they stop off at the home of Ben’s sister, Harper (Hahn), and her husband, Dave (Zahn). Ben’s honesty and directness in talking about Leslie in front of their two young boys leads to a row between Ben and Harper as to the suitability of speaking explicitly about issues that children don’t need to know about until they’re older. Ben apologises, but the next day he’s forced to show that his sister’s children are no match for even his second youngest child in terms of intelligence.

At a camping ground, Bo meets Claire (Moriarty), and experiences his first kiss, an event that leaves him confused and unhappy enough (though not about the kiss) to reveal that he’s applied to all the top colleges (Princeton, Yale etc.) and been accepted by all of them. Ben is upset that Bo has gone behind his back, but Bo reveals a secret that gives Ben pause, and makes him start to rethink his decision to raise the children in the wilderness. When they arrive at the funeral, Ben takes over from the priest, and reads out Leslie’s will. This angers Jack who has him removed. Still threatened with arrest if they turn up at the burial, his children convince Ben to stay away. But when Rellian makes it clear that he wants to stay with his grandparents (and the reasons why), it leads Ben further down the path of inappropriate parenting, results in one of his children ending up in hospital, leaves Ben with an unhappy decision to make, and unites his family in an endeavour that pushes the boundaries of what even the Cashes deem acceptable… probably. 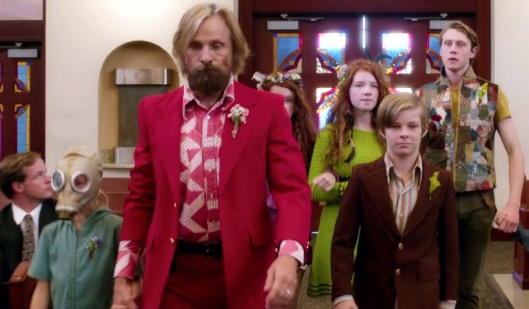 Based around the idea of being “completely present” in a child’s life, and how difficult that would be in today’s technology-saturated world, Matt Ross’s second feature is a warm, funny, yet profoundly sincere examination of what it means to be a parent, and the role of education in children’s lives. It offers a tantalising glimpse of a child’s true potential if that potential is guided and shaped by someone who is with them every day (like a parent), and not someone who may only interact with them for a few hours each week (like a teacher – and then not every week). But of course, while children may very well thrive in such an environment, the obvious pitfalls are there too. If you’re squirrelled away in the woods, then social skills become an issue, and so too does a child’s emotional development. You can teach a child about social interaction, but that’s no substitute for experience. But while Ross appears to be fully on the side of individualism and non-conformity, he’s astute enough to know that that’s not the full story, and that a more rounded approach needs to be in place (even if it does mean rejoining the “rat race”).

However, what this still means in terms of the narrative is a series of incidents and behaviours condoned and endorsed by Ben that are hugely amusing and yet wildly inappropriate at the same time. Robbing a grocery store, receiving hunting knives in order to celebrate Noam Chomsky day instead of Xmas, proposing marriage to the girl you’ve just kissed, climbing over a roof – all these and more are carried out by the children without even a first thought (let alone a second) as to how acceptable they are. It’s all fun and no consequences, games without frontiers or boundaries, and if there’s one thing we all know about consequences, it’s that they always come around sooner or later; and here those consequences turn up in the form of Leslie’s father. And Ross turns the tables on the viewers who’ve taken Ben’s side up til now by showing that Jack has a point too, and Ben’s way of parenting isn’t the only or right way of doing things.

This emotional and determinist tug-of-war occupies the movie’s final third, and leads to an overly sentimental conclusion to the whole affair (but which also begs a whole new set of questions about behaviour and consequences). In attempting to avoid providing any easy answers, Ross adds complexity to his narrative that stands the movie in very good stead, and which makes it an intriguing experience to watch. He’s helped immensely by a terrific, richly textured, and shrewd performance from Mortensen, expertly portraying Ben’s growing realisation that in order to be the good parent he thinks he is, he has to change and adapt to a new way of raising his children. As for the children themselves, high praise should be given to casting director Jeanne McCarthy for assembling such an amazing group of child actors. Each one of them has the chance to shine over and over, and not one of them is less than convincing (especially Shotwell, whose gender in the movie may be confusing for quite some time). They also get the lion’s share of the movie’s best lines, such as this (a)cute observation by Zaja: “You said Americans are under-educated and over-medicated.”

Ross mines the children’s superior intellects for much of the movie’s humour, but does so in a warmhearted, affectionate way that never grates or feels gratuitous. He’s not afraid to put his characters in emotionally distressing situations either, and there are times when the feelings on display are so raw as to be a little awkward to watch. But again, Ross keeps everything balanced and maintains a sense of purpose throughout, allowing scenes to flow easily and with obvious intent. It’s all shot beautifully by Stéphane Fontaine, who’s had a banner year in 2016, what with Jackie and Elle also under his belt (now there’s versatility), and the production design by Russell Barnes adds to the richness of the imagery. All in all, it’s a movie that entrances and captivates, and packs an emotional wallop when you least expect it.

Rating: 9/10 – owing a little to the work of Wes Anderson (and that’s definitely not a criticism), Captain Fantastic is a graceful, appealing look at parenting under pressure, and the highs and lows that come with it; with terrific performances all round, and assured, perceptive writing and direction from Ross, this is one of the more quietly profound movies of 2016, and also one of the most delightful.