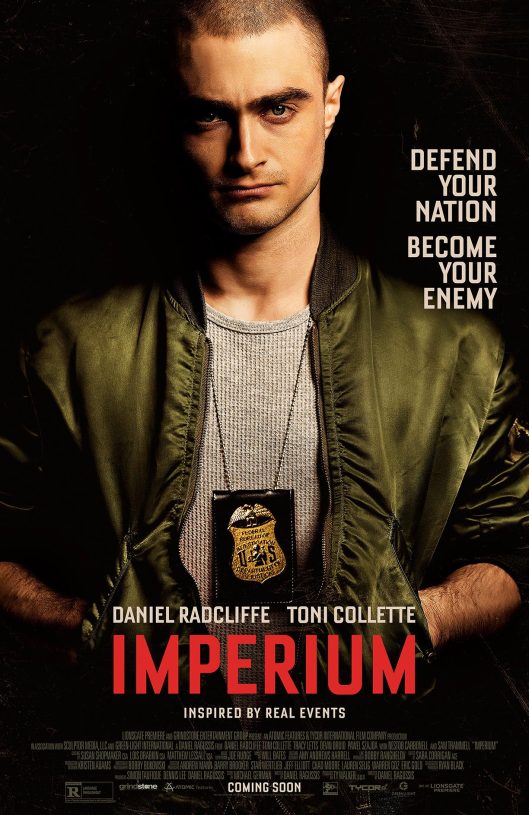 At the start of Imperium, relatively inexperienced FBI agent Nate Foster (Radcliffe) helps foil a terrorist bombing on US soil. His intuitive interrogation skills attract the attention of senior agent Angela Zampano (Collette). When a truck illegally carrying quantities of Caesium-137 – a chemical used in radiation treatments – crashes and six of the manifested containers are found to be missing, the FBI immediately assume that the chemical has been appropriated by Muslim terrorists. However, Zampano believes that the perpetrators are much closer to home, specifically within the white supremacy movement. She approaches Nate and convinces him that he would be an ideal choice to go undercover and infiltrate said movement and discover the whereabouts of the Caesium-137.

Connecting with a group of neo-Nazis led by Vincent (Szajda), Nate quickly earns their trust, and sets about making himself useful to them. Through Vincent, Nate is introduced to Aryan Alliance leader Andrew Blackwell (Sullivan), and other members of the movement, including atypical supremacist Gerry Conway (Trammell) who espouses supremacy ideals but leads an otherwise quiet suburban life. In turn, Nate’s attendance at a Unity Conference allows him to meet Zampano’s main target, an ultra-right-wing radio talk show host called Dallas Wolf (Letts). Wolf has ties and contacts to most of the organisations within the white supremacy movement, and Zampano is certain that he will know of any “action” that any of them may be planning. Nate gives Wolf the impression that he can help him boost the circulation of his radio show, in exchange for knowledge of any imminent “action” that Wolf may be aware of.

At a rally, a fight breaks out and Blackwell is injured. Nate helps him get away, and later receives an invitation to the Aryan Alliance’s new compound (which the FBI is unaware of). There he sees plans relating to the water network for Washington D.C., and fears that the Caesium-137 will be used to poison the water supply. Needing confirmation from Wolf, he pushes the talk show host, but Wolf refuses both the money offered to help expand his circulation, and to have anything further to do with Nate. At the same time, Blackwell is dismissed as a potential threat by the FBI. With his undercover work seemingly at an end, Nate makes one last visit to see Conway. Still “in character”, Nate relates how much he wants to make a difference to the world as it is now. And to his surprise, Conway reveals that he has the Caesium-137, and that Nate can make a difference to the world…

Imperium does two things that are dramatically unexpected: first, it makes it appear incredibly easy to infiltrate a white supremacist organisation, and second, it makes it appear equally incredibly easy to divert suspicion when an agent’s identity is called into question. There are two main occasions when it looks as if the game is up, and Daniel Radcliffe’s wide-eyed right-wing ingénue is in danger of being exposed, but apparently the trick is just to get angry, accuse others of duplicity or stupidity – or both, and treat the accusation with complete disdain. As for providing proof, don’t worry; due diligence isn’t exactly high on a white supremacist’s list of priorities. They may be paranoid, but they’re not stu- Oh, hang on. Sadly, it’s this unconvincing approach to the material that undermines much of director Daniel Ragussis’s screenplay, leaving the movie itself to struggle from scene to scene in maintaining the viewer’s interest.

It’s not so much that Imperium is a bad movie per se, but it is a movie that never grabs the viewer’s attention completely, making it an exercise that’s more frustrating than engaging or compelling. Also, there are problems with the character of Nate that Ragussis never seems to find solutions for. His initial naïvete and inexperience in field work (let alone being undercover) – illustrated by his being told to keep his weapon holstered in the movie’s opening sting operation – is highlighted in almost every scene until he’s facing Vincent across a table in a diner and making out he’s a disgruntled ex-Marine who doesn’t know why he was in Iraq. Nate gives an assured, confident performance that is completely at odds with his real, somewhat nerdy personality. He’s Serpico in suspect Levi jeans, and has an answer for everything. And despite the occasional protest to an uninterested Zampano, that’s how he remains.

This leaves the movie lacking in tension, as Nate goes about his task of infiltrating the white supremacy movement catching lucky break after lucky break and fending off any concerns about his being less than “racially superior”. And even though he’s been chosen for his empathy for others, where you might think that would lead to a kind of Stockholm Syndrome scenario, instead Nate appears largely unaffected by the hatred he encounters, and emerges from his undercover work psychologically unscathed. It’s this lack of depth, or any consequences to his involvement with such ideologically extreme people, that hurts the movie the most, as the script moves him from scene to scene, gathering intel but never being affected by what he sees and hears. This leaves Radcliffe, normally more than capable of inhabiting a role, somewhat stranded and unable to pull together a cohesive performance.

Inevitably, and despite the idea of there being a deadly chemical out there that could be used in a dirty bomb with the potential to kill thousands, it’s not a threat that anyone watching Imperium could take seriously. The various white supremacy protagonists are shown to be less than organised, preferring to squabble among themselves rather than combine their efforts and really make a difference (for which we should all be grateful), and their lack of guile and sophistication makes them a less than worrying “villain”. Only Gerry seems to be properly motivated, but in a very real sense he comes across as a left-wing idea of how a white supremacist should talk and behave; then they’d be more approachable, a notion that doesn’t make any sense at all.

With such tonal and narrative problems at the heart of the movie’s premise, Ragussis has assembled a movie that only fitfully engages the viewer, and which doesn’t seem to know just how effectively white supremacist groups are operating currently in the US, and just how much of a threat they really are (again, on this showing, not very much at all). There’s a good, thought-provoking movie to be made from the issue, but this isn’t it, and though the likes of Collette, Letts and Druid as a young neo-Nazi rise above the material for the most part, spare a thought for Radcliffe, stuck with carrying the movie for most of the running time, and whose director couldn’t get him to stop looking so scared and wide-eyed in scenes where he had no need to look scared and wide-eyed.

Rating: 5/10 – not quite a disaster, but certainly not as impressive as you might expect, Imperium is a sluggish, uncertain, and poorly assembled movie that never does itself justice; hampered by a script that feels under-developed in large stretches, this is passable stuff that requires patience and forgiveness in order to reap the few rewards it has to offer.