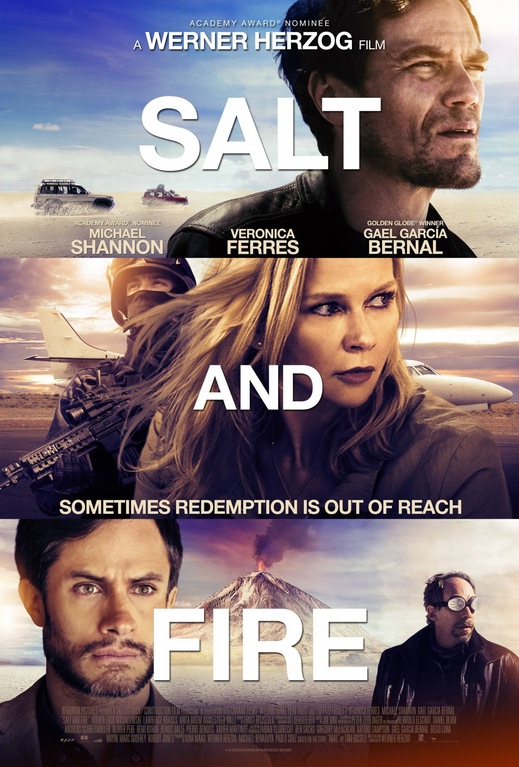 If you’re a fan of movies where the characters sit around philosophising obliquely on the nature of existence or other such topics, and where said characters behave in a mannered, artificial way that doesn’t reflect the behaviour of anyone you know or have ever met, then Werner Herzog’s latest foray into movie making, Salt and Fire, will provide you with ninety-eight minutes of elliptical, cod-poetic pleasure. What ostensibly looks like a thriller soon turns into something else entirely, and just as you get to grips with where Herzog is taking you, he then pulls the rug out from under you and leaves you to deal with yet another change in tone – or, as you might want to put it, his latest attempt at narrative (and audience) manipulation.

Such is the case with Salt and Fire, which begins with a car heading toward a lonely country estate. Once arrived, we see lots of armed guards, and a blindfolded woman taken out of the car and led inside. There she is surrounded by even more men, all of whom are wearing balaclavas to disguise their faces; one is even in a wheelchair. The woman is a scientist, Dr Laura Sommerfeld (Ferres), and it transpires that she is the head of a United Nations team sent to investigate a recent ecological disaster that has occurred somewhere in South America. Accompanied by two colleagues, Dr Fabio Cavani (Bernal) and Dr Arnold Meier (Michalowski), Sommerfeld is expecting to be met at the airport by a government representative. Instead, all three of them are flown to another location, and upon arrival, are kidnapped.

At the country estate, matters are made no clearer, and Sommerfeld is kept away from her colleagues. The man who seems to be in charge won’t explain why they’ve been abducted, but he does tell her that there won’t be any ransom demand. She’s given her own room, treated fairly despite the situation, and soon the man in charge reveals himself to be Matt Riley (Shannon), the CEO of The Consortium, the company responsible for the ecological disaster. Days pass without Sommerfeld becoming any the wiser as to the reason for Riley’s actions, but a grudging respect does develop between them. One day they head out on a trip to the site of the disaster, a vast expanse of salt flats known as El Diablo Blanco, and which is expanding at an exponential rate that could see it cover the entire continent in – possibly – a generation. Nearby is a supervolcano, Uturunku, that is showing signs of increased activity, and Riley is worried by that as well, though whether or not The Consortium is responsible for that, Riley neither confirms or denies.

By this stage of the movie, Shannon has been saddled with the kind of dialogue that could best be described as “pretentious twaddle”. Lines such as, “There is no reality, there are only perceptions of reality”, or “Truth is the only daughter of time”, are delivered with as much depth and sincerity as the actor can give them, but they just add to the whole pretentiousness of the situation. But once we’re at the salt flats, Herzog does us all a favour and removes Shannon and his daft philosophising from the movie, and leaves Sommerfeld stranded on a rocky outcrop that’s home to hundreds of cacti, and with supplies to last about a week. Oh, and she’s stranded there with two young boys, both nearly blind, called Huascar (Danner Arancibia) and Atahualpa (Gabriel Arancibia).

In this third act, Sommerfeld occupies her time by playing unofficial mum to the boys (who seem completely unperturbed by their being stranded in the middle of the salt flats), looking out over the vast expanse surrounding them, or making short videos on her tablet (which miraculously retains its battery charge for the whole time). Finally, and with their water on the verge of running out, Sommerfeld and the two brothers are saved by a twist that is as unlikely and dramatically unsound as most of the rest of the movie. If you’re still here at this point, you might be thinking that Herzog spent just as much time writing the script – itself based on the story, Aral, by Tom Bissell – as he did shooting it (a mere sixteen days). It’s a movie that rarely makes sense, rarely seems coherent, and though it’s trying to make a point about Man’s impact on nature, it makes the point so badly that no one’s ever going to care.

But while this is a movie by Werner Herzog that aims high and then never gets off the ground, this is also a Werner Herzog movie, and though it has a number of faults, and many of them are insurmountable, it can’t be dismissed so easily. Whatever he may be guilty of here, Herzog is still one of the most ingenious and perceptive directors working today, and while his dialectic approach to the material is an unfortunate liability, what isn’t is the truly stunning cinematography courtesy of Peter Zeitlinger. Salt and Fire features an impressive array of aerial views and beautifully framed landscapes, and the salt flats themselves, the quietly incredible Salar de Uyuni in Bolivia. Zeitlinger captures their vast expanse and the intricate nature of their honeycomb-like appearance so vividly that watching them can’t fail to provoke a response, even if that response is hard to articulate. What’s even more impressive is that the flats have been heavily exploited as a tourist attraction in recent years (you half expect the latest Kia model to zoom past in the background), but thanks to Zeitlinger’s diligence, you wouldn’t know it from seeing the movie.

Despite the poor quality of the script, and the lack of both nuance and insight, Salt and Fire, thanks to Herzog’s innate skill as a director, is still a mesmersing experience. There are few directors who could make a movie such as this one and still make it absorbing to watch, even if it doesn’t seem to be going anywhere, doesn’t give its cast a fair chance at providing good performances (Bernal’s lascivious, hysterical Italian feels like he should be in a romantic comedy instead of a semi-literate exploration of whatever Herzog is trying to say), and doesn’t bother to provide credible motivations for the characters. Instead, what’s surprisingly effective about the movie is the mood Herzog creates. He’s described Salt and Fire as “a daydream that doesn’t follow the rules of cinema”, and on that level, he’s not too far off. Somehow it manages to get under your skin and it keeps you watching right until the end.

With both Ferres and Shannon doing their best to cope with the demands of Herzog’s script, but left to drift without any recognisable direction – Shannon randomly shouts at his female co-star, Ferres talks to her tablet as if it were another character – there’s even less for Bernal and Michalowski to do, and they soon disappear from the story, their characters left suffering from extreme diarrhoea (if there’s a subtext here it’s incredibly difficult to track it down). Only Krauss provides some much-needed levity, but inevitably, it’s at odds with the overall tone. It all adds up to possibly Herzog’s worst fiction feature ever – yes, even worse than Queen of the Desert (2015) – and a clear indication that not every director should work from their own script.

Rating: 4/10 – with its fragmented structure and appetite for obfuscation, Salt and Fire is a misfire that will probably have little effect on Herzog’s ability to make the kind of movies he wants to make; dramatically inert for long stretches but saved by some outstanding photography, it’s a movie that frustrates and confounds without any consideration for the negative effect these drawbacks have on the movie as a whole (or, indeed, Herzog’s reputation).