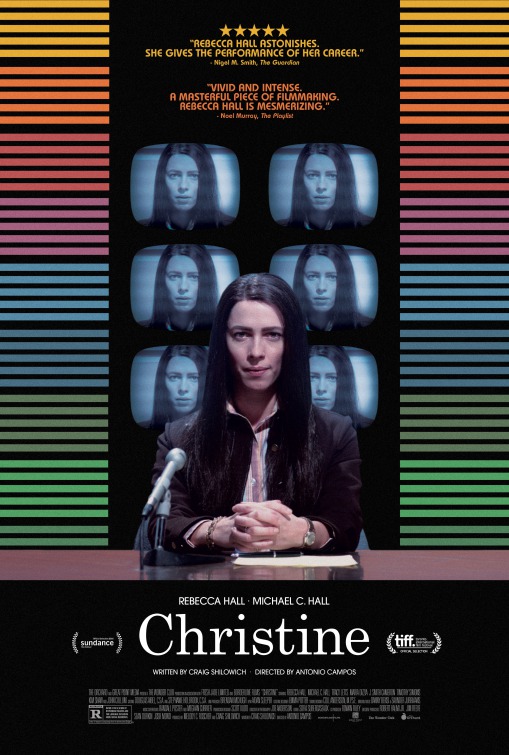 In the Spring of 1974, Christine Chubbuck (Hall) was a twenty-nine year old news reporter working for Channel WXLT in Sarasota, Florida. She was single, she lived with her mother, Peg (Smith-Cameron), and she had been given her own talk show on WXLT called Suncoast Digest, in which she would focus on local people and community activities. But Christine also suffered from depression, and could be up one moment and down the next (nowadays she would likely be diagnosed as having bi-polar disorder). Her depression could lead to extreme mood swings, and she would often push people away even though the few friendships she had were very important to her. And she regularly complained that the news stories she, and the station, were covering weren’t interesting enough, and that the station should focus more on regular people’s lives and what those lives were really like.

This kept her at odds with news director Mike Simmons (Letts), and the two would have regular run-ins as Christine tried to emphasise the various ways she felt the station wasn’t living up to its potential. Simmons wanted “juicier” stories about murder and other crimes; Christine felt the station should focus more on local people and the drama inherent in their lives. Simmons didn’t. Also at this time, the owner of WXLT, Bob Anderson (Cullum), was looking for two of the news team to transfer to Baltimore to a new station he’d recently purchased. Lead anchor George Peter Ryan (Hall) was a likely candidate, but Christine felt that she could be the other person Anderson was looking for.

Christine’s determination to be that other person led her to make some questionable decisions in relation to her work, and she came close to alienating Simmons for good. When she discovered that she wouldn’t be going to Baltimore (even after speaking directly to Anderson), Christine’s depression seemed to be under control. Her mood swings disappeared, she was more agreeable to her fellow co-workers, and she apologised to Simmons. She also asked to helm a Suncoast Digest piece direct to camera, something she’d never done before. Simmons agreed, and on the morning of 15 July 1974, Christine became a news story herself…

In telling the last few months in the life of Christine Chubbuck, Antonio Campos and screenwriter Craig Shilowich have fashioned the kind of Seventies-based journalistic enquiry that wouldn’t look out of place when compared to similar movies made at the time. With its drab Seventies decor and often drabber costume design (brown was definitely the colour back then), Christine pays homage to an era when news reporting in the US was heavily community-based – parochial even – and sensationalism was just beginning to take hold (when one of Christine’s reports is bumped in favour of a murder outside their area, she’s informed it’s because it’s what the viewers want to see). The movie eloquently and confidently recreates the period (in all its dreary glory), and provides a perfect backdrop for its tale of a real-life news reporter who could never understand why her work wasn’t as well-regarded as she expected. 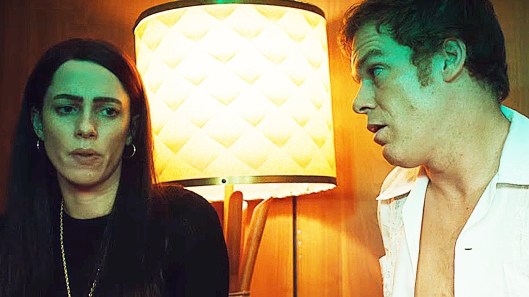 Christine’s issues at work were exacerbated by her mental health issues, and the movie spends a lot of time reinforcing the idea that she was unwell. There are references to a previous “episode” that occurred before she and her mother moved to Sarasota; Christine herself acknowledges at times her own inability to connect with the people around her (she seems more confident with strangers, something that’s noted but not examined too closely); and her continual on-again, off-again reactions to her colleagues speak effectively of someone struggling to make sense of her place in the harried world of news journalism.

That Christine Chubbuck suffered from a variety of mental health issues is clear from Shilowich’s sympathetic and engrossing screenplay, and Hall gives a bravura performance, imbuing the troubled newswoman’s lack of social skills, and her off-kilter idea of professional balance with a scary, aggressive approach that initially makes her a hard character to like. But with the knowledge that she is ill, the movie is able to provide a sympathetic hook for the audience to hold on to, even when Christine is being manipulative and horrible to her mother, berating Simmons for treating her badly, or when she mistreats her best friend and colleague, Jean (Dizzia).Through all this and more, Hall never loses sight of the woman who is trapped behind the cold veneer of mental illness, and whose sense of self-worth is only as strong as the approbation she receives from the people around her (and which she then refutes). It’s an often distressing performance, and one that’s tempered by a refusal to soften the blow of certain scenes and images (it also makes you wonder how on earth Meryl Streep could have received an Oscar nomination for Florence Foster Jenkins when Hall’s portrayal is on another level entirely).

Other aspects of Christine’s personality, character and history are explored, such as the work she did with children with intellectual disabilities, adopting a puppet show approach to teaching them life skills. The movie uses these shows to explore the depth of Christine’s own feelings about various topics, and they retain an added poignancy thanks to the knowledge that though Christine is passing on sound advice, the viewer is aware that it’s advice she herself won’t be able to follow. In a scene where Ryan takes her to a trancendental analysis meeting, Christine expresses all the things that are wrong with her life, including the lack of a partner and/or children. This is the crux of the matter: she doesn’t want to be alone anymore. She’s fast approaching thirty, is to all intents and purposes alone in her life, can’t see a way forward, and decides on a course of action that will deal with everything that contributes to her being depressed.

Anyone aware of Christine Chubbuck and what she did that baleful July morning in 1974, will already know the movie’s outcome, but what’s remarkable about the period before that day, and the way that both Shilowich and Campos treat it, is that it’s not until the last ten or twelve minutes that Christine’s fate is sealed. There are a couple of foreshadowings that viewers who are “in the dark” may well pick up on, but as well as its self-destructive mental health theme, this is the story of a woman fighting for recognition in an industry that was inherently sexist, and which was on the verge of becoming less conventional and more exploitative. This subplot is given enough screen time that it adds to the sense of Christine being beleaguered from all sides, and her efforts to break free and get to Baltimore all the more understandable. But it’s also Christine’s last chance to salvage something from her time at WXLT, and it’s only then that her “solution” presents itself. With both her personal and professional lives coming to a standstill, her decision has an inevitability about it that the movie has avoided delving into up until then.

Throughout, Campos’ direction is solid, sympathetic and invigorating. He wisely keeps the focus on Hall, while giving the likes of Letts and Michael C. Hall plenty of room to flesh out their characters and make them as credible as they can (in reality, neither Ryan nor Simmons had as much involvement in Christine’s life as they do here, and sometimes it shows). The hustle and bustle of the newsroom is downplayed in favour of effective character beats, while Joe Anderson’s muted yet moody cinematography is a perfect match for the emotional troubles Christine experiences. There’s a whole lot of heart and craft here, and as an examination of one person’s bitter disappointment with the hand Life has dealt her, it’s also painfully affecting.

Rating: 8/10 – with a mesmerising and compelling performance from Hall (a career best in fact), and a wealth of sincerity and compassion when it comes to its central character, Christine is a remarkable movie let down only by its lack of back story, and some repetition in Christine’s dealings with Simmons; absorbing and vivid, and with a sly streak of humour running throughout, it’s also a movie that refuses to pass judgment on her, and which does its best to honour her memory without sensationalising it, something she would most likely have approved of.