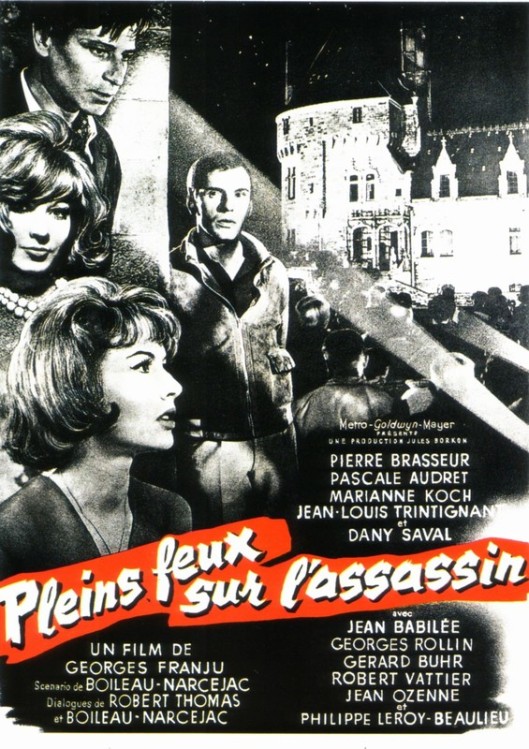 Comte de Kerloguen (Brasseur) is dying. He knows it, his housekeeper knows it, his lawyer knows it, even his stable hand knows it. But the rest of his family don’t. So when the fateful moment arrives, the Comte does what all good patriarchs do: he hides himself away in a secret room in the family chateau, a place that nobody knows about and where his body is unlikely to ever be found. When his lawyer assembles the family to inform them of the Comte’s disappearance, he has odd news for them. While the Comte can be declared legally dead, his actual disappearance means that his estate can’t be divided amongst his family for another five years. And until that time, the family are fiancially responsible for the upkeep of the chateau.

Naturally, this doesn’t sit too well with most of the family, but as most of them don’t have the wherewithal to maintain the chateau, when Micheline (Saval), the girlfriend of youngest son Jean-Marie (Trintignant) suggests they make the chateau a tourist attraction and charge people to visit the place, the idea is adopted tout suite. But as the plan goes ahead and amongst other things, the building has a speaker system installed, a series of unfortunate “accidents” sees death take the lives of some of the family, until it becomes clear that one of them is determined to be the sole beneficiary of the Comte’s  estate in five years’ time. 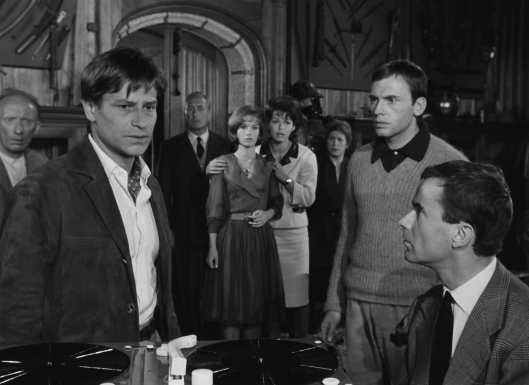 The third feature from director Georges Franju, who had made the creepy Eyes Without a Face the year before, Spotlight on a Murderer reunites Franju with thriller writers Pierre Boileau and Thomas Narcejac in their tried and trusted tale of a family being riven from within when greed prompts one of them to dispatch the others in order to be the sole claimant of their wealthy antecedent’s estate. The key phrase here is “tried and trusted”, as this is a movie that does its best to employ a sinister vibe once the deaths begin to mount up, and all to direct attention away from the flaccid nature of the plot. Said vibe is employed to good effect, but the material itself is riddled with longueurs, and the pacing is awkward, with some scenes ending abruptly as if the team of Boileau-Narcejac haven’t thought them through fully, or don’t have so much to say.

It’s a problem, too, that the storyline, even for 1961, is “old hat”, with the script attempting to emulate or outshine previous old dark house mysteries. But thanks to a tepid script and Franju’s erratic commitment to the narrative, the movie lacks the necessary inventiveness to place it over and above the myriad of similar features. There’s only one moment that manages to overcome the indifference of the rest of the material, and that’s when the chateau’s speaker system picks up someone moving through the rooms. At first, there are only three people in the control room, and all three wonder the same thing: where is everyone else? And within a minute, everyone appears with them, leaving the audience in a quandary: if everyone is there, then it can’t be the murderer, can it? Or maybe, just maybe, the Comte isn’t as dead as we’ve all thought? Viewers who are paying attention will know the answer to this quandary, but for a brief couple of scenes the movie steps up a gear and becomes a real mystery thriller, complete with an atmosphere of dread. 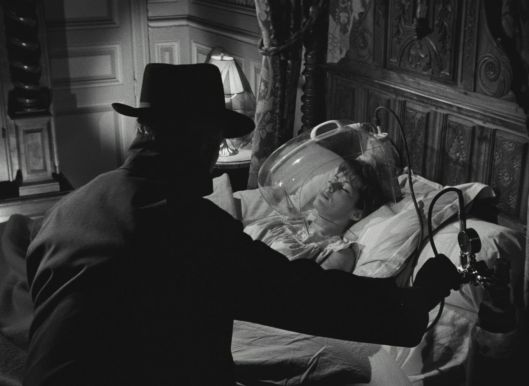 The characters suffer too, being archetypes painted with broad brush strokes, from Koch’s earthy cousin, Edwige, to Audret’s easily exploited paranoiac, Jeanne. On occasion we get to learn a little bit more abut them all, but it’s never enough to help the viewer sympathise with them for more than a few minutes. The various deaths – aside from one – lack the impact needed to tighten the tension, and the whodunnit aspect of the tale generally takes a back seat to the trials and tribulations of the main characters. A blatant visual sleight-of-hand endeavours to wrong foot the viewer but again, does so only if the audience isn’t paying attention.

Spotlight on a Murderer wasn’t as well received as Eyes Without a Face, and it’s easy to see why. Regarded as a minor Franju movie by critics at the time, the movie has picked up its supporters over the years, but it remains a curio in terms of its gloomy mise en scene, and its place in the director’s career. There’s also the matter of Maurice Jarre’s less than inspired score, which tries to prop up the periods where the camera tries to make the chateau look menacing and/or atmospheric. The cast are competent enough, with Saval’s wild child girlfriend proving one of the movie’s few stellar accomplishments, while Franju sees fit to embrace rather than reject the scene where the murderer is apprehended (and which, amazingly, includes two moments of physical slapstick along the way). All in all, it’s a movie that proceeds in fits and starts and never really settles into a convincing groove – which is a shame, as there is clearly the potential there to make a movie that resonates and inspires dread to a much better degree.

Rating: 5/10 – despite the pedigree of its director, writers and cast, Spotlight on a Murderer is only a mildly successful thriller that squanders a lot of its running time with soap opera elements that feel out of place, and which don’t advance the plot in any meaningful way; proof again that even the most highly regarded of movie makers don’t always get it right.

NOTE: Alas, there isn’t an available trailer for Spotlight on a Murderer.