Dane Jensen (Butler) is a tough, no-nonsense headhunter who uses a mixture of insider knowledge, sharp practice and carefully orchestrated bullying to get the sales figures he needs; everyone he successfully finds employment for earns his company, Blackridge Recruiting, a five-figure sum. His boss and mentor, Ed Blackridge (Dafoe), informs Dane and his main rival, Lynn Vogel (Brie), that he’s taking a step back from running the company, and his successor will depend on which one of them is the more successful in the forthcoming financial quarter. Dane is the better headhunter, and heading into the quarter has no doubts that he will take Ed’s place.

But while Ed is all-conquering at work, at home it’s a different matter. His wife Elise (Mol), would like Dane to be home more, as would his kids, Ryan (Jenkins), Lauren (Butters), and Nathan (Wright). But Dane is committed more to his work than he is to his family, and he continually makes excuses for getting home late and/or missing events in his children’s lives. The only promises he can’t seem to break or those that he makes to his clients, such as engineer Lou Wheeler (Molina). However, Dane’s outlook on life and his commitment to Blackridge begins to derail when Ryan is diagnosed with ALL (Acute Lymphoblastic Leukemia). Faced with losing Ryan if his treatment fails, Dane spends more and more time with his son but to the detriment of the sales target he needs to reach to step into Ed’s position. As he struggles to come to terms with his son’s illness and his declining fortunes at work, Dane has to decide which is more important: his family, or providing for them. 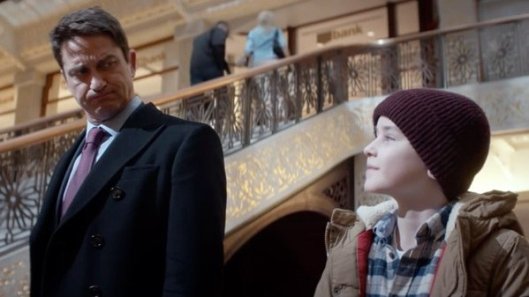 If you decide to watch A Family Man, then be prepared to enter a world where lots of things happen that don’t happen in the real world. Now, of course, A Family Man isn’t based on a true story (not that it would matter), and it’s not a movie that’s set in a far-off fantasy world where dragons lurk over the next hillside, or wizards in pointy hats loiter in the local tavern. But its story does take place in an alternate reality, one that looks and feels just like the real world, but it’s also one that gives itself away from time to time as being wholly imaginary. It’s on these occasions that the movie, and Bill Dubuque’s saccharine-drenched screenplay, give the game away, and as a result, any suspension of disbelief disappears in an instant. And it’s a shame, as the movie didn’t need to be created in this fashion, and if the makers had excised all the otherworld trappings, then it might have stood a better chance than it does in its current form.

It’s a familiar story, told with a smattering of charm and a large amount of pontificating. Dane is the classic absent husband, too hooked up on the importance and the power he has at work to notice his home life slipping away from him. There’s always one more phone call to take, one more employer to call and cajole into taking on a client, one less occasion to spend with his wife and kids. He tries to justify his behaviour, his absenteeism, by spouting that he’s doing it for his family, as if they should be grateful that he’s becoming less and less of a presence in their lives. But the script isn’t satisfied with just having Dane dressed up in Hugo Boss and seeing life with blinkers on. He has conversations with Elise where he wonders about the bigger questions in life: is there more to everything than work (yes), how do you know if you’re happy (you just know), and why should it take forty minutes to ejaculate (ah, you’re too stressed?). It’s okay that Dane’s not just a lean, mean recruiting machine, but the script’s idea to make him seem more rounded as a character is laughable and obtuse.

But with the arrival of Ryan’s cancer, the movie abandons any attempt at investigating Dane’s interior life, and instead, takes us on a journey into the alternate reality already mentioned above. This is a world where a child’s desire to be an architect when they grow up leads to Dane and Ryan visiting five famous Chicago landmarks, and Dane being able to recite facts about each one with confidence and precision. Dane appears able to skip work whenever he needs to in order to make these trips, and the hospital where Ryan is being treated seems remarkably unconcerned about them (one of Ryan’s main symptoms is generalised weakness and fatigue; wouldn’t these trips be detrimental?). A phone call between Dane and Lou sees Lou try to act as Dane’s counsellor when he doesn’t even know him. And then there’s Ryan’s doctor, an oncologist (Kher), whose bedside manner includes kissing Ryan’s hand at one point (yeah, that probably happens all the time).

There are further examples as the movie grinds mercilessly towards the kind of sugar-coated resolution that is meant to extract copious amounts of tears from its audience, but which in reality (yes, the real reality), is likely to encourage groans and unforced laughter. It’s all topped off by an unlikely last-minute piece of character reversal that only happens in the movies, and which even the most forgiving of viewers will find ludicrous/ridiculous/silly (delete as appropriate). Through it all, Butler at least plays it straight, even when the absurdity of some scenes seems written in letters forty feet high, and he’s backed by Mol whose role as Elise is undermined by the character’s yo-yoing back and forth between castigating Dane and supporting him. Dafoe’s role is nothing more than a recurring cameo, Brie is wasted, Molina has perhaps the movie’s best moment – in a bathroom, and the rest of the cast orbit around Butler until told what to do. Directing for the first time, Williams lacks the necessary experience to overcome or iron out the script’s inherent problems, and there are too many times where his direction brings out the commonplace rather than anything that might raise the material above the level of acceptable.

Rating: 4/10 – adequately done, A Family Man won’t stick around in the memory, but while you’re watching it, it will make an impact, albeit an unfortunate one; laden with too many moments and scenes that are hellbent on manipulating its audience’s emotions, the movie has all the hallmarks of a glossy disease-of-the-week TV movie, but with a bigger budget, a better known cast, and more time to drag out its increasingly implausible narrative.