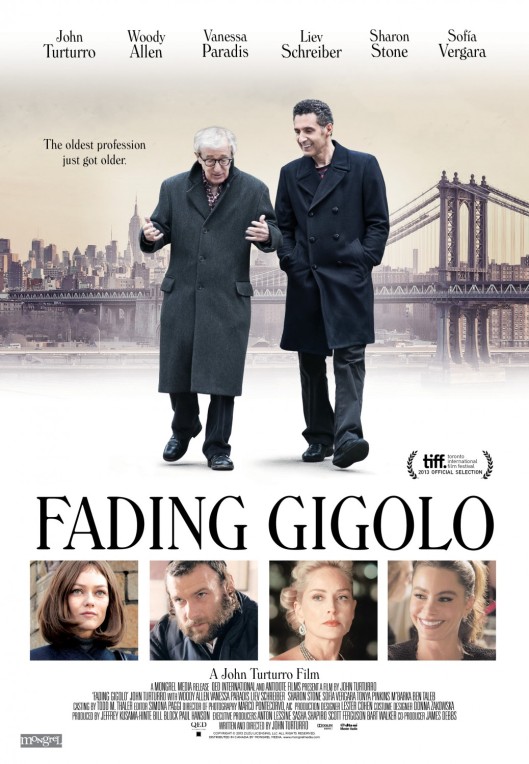 Question: when is a Woody Allen movie not quite a Woody Allen movie? Answer: when it’s written and directed by John Turturro… who’s had help from Woody Allen in assembling the script. A broad romantic comedy with a large helping of sympathy for its characters, Turturro’s fifth outing in the director’s chair is an engaging, likeable movie that has all the hallmarks of a Woody Allen movie, but then tweaks them in varied and surprising ways.

It begins with Turturro’s character, Fioravante, helping his friend, Murray (Allen), with the closure of his bookstore. Looking for a new business opportunity, Murray reveals that his dermatologist, Dr Parker (Stone), revealed to him during an appointment that she and a girlfriend of hers, Robbie (Vergara), are looking to engage in a ménage à trois. As Dr Parker is willing to pay for the experience, Murray suggests that Fioravante is the man they need, but he’s initially resistant to the idea. Eventually, Murray convinces his friend to take the “job” and contacts Dr Parker. She decides to meet Fioravante on her own to see if he will be suitable. He passes the test and soon, Dr Parker is recommending his services to some of her friends, while Murray is drumming up clients in his own fashion.

Fioravante’s success as an escort leads to an unexpected encounter. Through Murray, Fioravante meets the widow of a Hassidic Jew, Avigal (Paradis). They begin a tentative relationship that attracts the attention of Dovi, who works for Shomrim, a neighbourhood patrol. He has been in love with Avigal since they were teenagers, and he begins to follow her when she leaves the neighbourhood. While Fioravante and Avigal spend more and more time together, Dr Parker finally decides the time is right for the planned threesome to go ahead. But just at the point that Fioravante realises that he’s in love with Avigal, Dovi grabs Murray off the street and takes him to face a Rabbinic court. His involvement with Avigal is questioned, and it takes an unexpected intervention to resolve matters once and for all.

From the very beginning, Fading Gigolo is a genial, simple, romantic comedy drama that does what it does with equanimity, and which never tries to go beyond its basic remit. It’s this self-awareness that helps the movie immensely, and while the characters are largely stereotypical and written in broad brush strokes, Turturro’s direction encourages his talented cast to portray them with small, idiosyncratic details that help enhance the material as a whole. Turturro, both as director and actor, is generous with his cast, and his lack of selfishness in front of the camera is reflected in his largesse behind it.  Turturro also encourages his cast to underplay their emotions and provide more subtle character beats than would be expected (Stone in particular is good as a confident professional whose vulnerability is revealed during her first meeting with Fioravante). There’s a lot going on below the surface a lot of the time, and more is relayed to the viewer by the characters’ expressions than by the dialogue.

This allows the viewer to respond to the material to a much greater degree than might be expected. As a result, the movie gains increasing credibility as a romantic drama, and the cast respond accordingly. As it slips off its comedic mantle in favour of dealing properly with the emotional and relationship issues that have arisen, Turturro ensures each development is accorded the relevant amount of sincerity and pathos (except for Balaban’s appearance as Murray’s lawyer at the Rabbinic court, a turn that is resolutely out of place, and is the one major lapse in Turturro’s direction). The emerging friendship between Fioravante and Avigal is treated with a tenderness and a subtlety that mirrors the mutual uncertainty that both are feeling, and Paradis perfectly expresses the sadness and the hope that Avigal feels as both a widow and a woman. In comparison, Turturro keeps his performance reined in, barely moving, and keeping his dialogue to a minimum, and yet still expressing his character’s anxieties and sense of anticipation. The outcome of their relationship is never in doubt – such is the entirely foreseeable nature of the screenplay – but when it comes it, it’s a brief and affecting moment that in a very succinct fashion, highlights exactly why the outcome is what it is.

Allen’s participation is unusual in that he rarely appears in other people’s movies these days – the last time was in Alfonso Arau’s Picking Up the Pieces (2000), which also featured Stone – but what isn’t a surprise is that he plays yet another minor variation on the neurotic Jewish intellectual-cum-nebbish he’s been playing for over fifty years. He does infuse the role with a desperate, greedy quality we haven’t seen before, but otherwise it’s business as usual. Fortunately, Allen’s presence doesn’t overwhelm things, and his supporting role is integrated effectively into the main storyline. Again, there are many similarities between this movie and others that Allen has made over the years, enough perhaps to make him feel comfortable in taking on the part. But though his involvement in the script has been confirmed by Turturro, this isn’t a movie that anyone could say Allen directed. Turturro has his own style, and he approaches the characters in a very different way from the way that Allen does. And faced with such a predictable plot to begin with, that Turturro does overcome it is a sign of the actor’s confidence in being a director.

Rating: 7/10 – funny and dramatic in equal measure, Fading Gigolo never loses sight of what’s important and at the heart of its tale: how much we want to connect, and how much we’re willing to give of ourselves in order to make that connection; Turturro makes it all look relatively easy, and does so by remembering that every character (even Murray) is looking for love in some form or other, and that even if it’s provided by an escort, it can still be fulfilling and/or the right choice. (7/31)