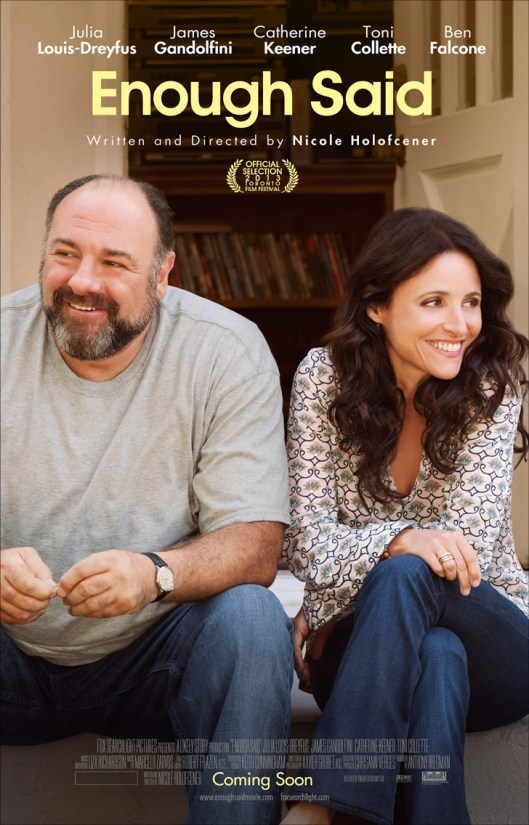 The career of writer/director Nicole Holofcener has been an interesting and successful one, with plenty of plaudits for her movies, and healthy box office returns. She makes movies that rely on a sense of realism that you don’t see too often in other, similar-minded indie movies, and thanks to Holofcener having hired Catherine Keener for every feature that she’s made, she’s regarded as someone who makes chick flicks. Chick flicks that are intelligent and character-driven, but still… chick flicks. When the producers of Enough Said approached Holofcener with an offer to produce her next movie, they had one proviso: it had to be more mainstream than her previous movies. Holofcener rose to this somewhat insensitive challenge, and in doing so, made her most accessible, and most enjoyable movie to date.

The movie’s central character is a middle-aged, ten-year divorced masseuse called Eva (Louis-Dreyfus). She has a teenage daughter, Ellen (Fairaway), who’s about to leave home to go to college, and she’s not seeking a new partner or husband or significant other. At a party she attends with her friends, Sarah and Will (Collette, Falcone), she meets Marianne (Keener), a poet, and the two hit it off. Later on, Eva tells Sarah and Will there isn’t a single man there that she’s attracted to. Until she’s introduced to Albert (Gandolfini), that is. Within a day or two, Eva has been contacted by Marianne who wants a massage, and she learns from Sarah that Albert has asked for her number. Eva and Albert arrange to have dinner together, and the evening is a success. She begins a relationship with Albert, while at the same time she learns about Marianne’s failed marriage to a man who always pushed the onions in guacamole off to the side of the bowl before eating it. Marianne remains hyper-critical of her ex-husband, and tells Eva more and more about his “digusting habits”. 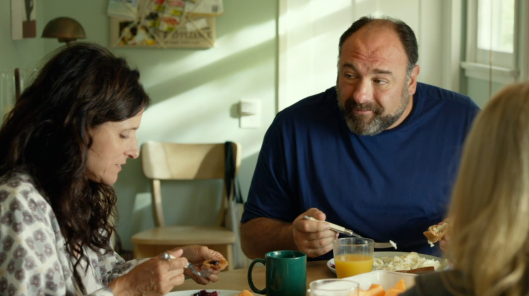 Soon, Eva begins to put two and two together, and realises that Albert is the ex-husband that Marianne disparages so much. But instead of revealing her connection to both of them – she and Marianne have become friends – Eva keeps quiet, but allows Marianne’s complaints about Albert to colour her judgment about him and their relationship. At a dinner party with Sarah and Will, Eva makes embarrassing comments about Albert’s weight, all of which lead to him asking her the question, why did it seem like he’d spent the evening with his ex-wife? Eva has no answer for her behaviour, and their relationship cools a little. It’s only when Eva finds herself at Marianne’s place and her daughter, Tess (Hewson) (who Eva has already met on a lunch date with Albert), reveals the truth about her relationship with Albert, that things come to a head. But will Albert be as forgiving of Eva as she needs him to be?

It isn’t long before Enough Said begins to exert a sincere and yet powerful fascination on the viewer, as the wit and perspicacity of Holofcener’s script begins to take hold and for once – for once – it becomes clear that this will be a movie where the characters are entirely recognisable, and where the dialogue they voice has the freshness and the vitality of everyday speech. This isn’t a movie where characters get to expound on how they feel at length, or say pithy, clever remarks that perfectly encapsulate their emotions or sum up their situation. Instead this is a movie where the central character allows their built-in neuroses and their lack of confidence in a new relationship to undermine the happiness they’re building up, and does so in a way that’s entirely regrettable but also entirely human. Holofcener based her script on some of her own experiences as a divorced, middle-aged mother of two, and with Enough Said she’s crafted a knowing, sympathetic tale that carries with it an emotional heft and a low-key, semi-jaundiced view of starting afresh when all you can focus on is the possibility of past mistakes repeating themselves.

When we first meet Eva she’s stuck in a rut of her own choosing. Ten years after her divorce she’s resigned herself, deliberately, to being a parent and a masseuse and a friend, all roles that involve being of service to others. Albert’s arrival in her life throws all that up in the air, and Holofcener’s script, aided by a shrewd performance from Louis-Dreyfus, highlights just how much his presence rattles her, even while it’s the best thing that’s happened to her in years. Eva’s confidence is further undermined by Marianne’s descriptions of Albert as the less-than-perfect husband, and with a little knowledge comes great doubt as Eva allows herself to be swept up in the possibility that her relationship with Albert will be an echo of his marriage to Marianne. It all leads to Eva sabotaging their affair and endangering the happiness she hasn’t had for so long. And Louis-Dreyfus makes it all so plausible, thanks to some detailed shading in her performance, and a willingness to risk making Eva appear unsympathetic.

The role of Albert was of course Gandolfini’s last screen portrayal, and it’s a pleasure to watch his performance, one that’s relaxed and where he’s clearly enjoying the opportunity to shrug off his bad guy image and play a gentler, more vulnerable kind of character. He and Louis-Dreyfus have an easy-going chemistry together, and though Holofcener’s script is full of naturalistic, convincing dialogue, it’s the moments where they’re improvising that provide some of the movie’s more memorable (and quotable) exchanges. Elsewhere, the bickering between Sarah and Will will be familiar to anyone who’s been in a long-term relationship, though Eva’s unofficial “adoption” of Chloe occasionally stretches Holofcener’s carefully crafted credibility. There are also minor themes relating to alienation between a parent and a child, peer pressure amongst teenagers, and undisguised snobbery, all of which have their moments and all of which add to the rich texture of Holofcener’s story. But it’s the relationship between Eva and Albert that works best of all, because it’s relatable, it’s sensitively handled, and it’s the kind of middle-aged romance that rarely turns up on our screens, and rarely with such vivid, impressive authority.

Rating: 9/10 – a beautifully written tale of love under unnecessary pressure, Enough Said is insightful, vital, immensely satisfying, and features two superb performances from Louis-Dreyfus and Gandolfini; that said, Holofcener is the real star here, and it’s a shame that there haven’t been any other producers banging on her door with the same enthusiasm since, especially as this movie is, so far at least, the very talented writer/director’s finest work to date. (27/31)