In recent years, Ireland has produced a slew of movies that have wowed audiences at film festivals around the world, won numerous awards, garnered heaps of critical praise, and shown that the country is capable of making smart, well-made, impressive movies on relatively small budgets but with bags of talent and ingenuity. In 2016 alone, Ireland brought us Sing Street, Love & Friendship, The Young Offenders, and South. And it also gave us A Date for Mad Mary, a movie about friendship, first love, and false assumptions. It’s a movie that takes a well established dramatic template – what happens when best friends stop being best friends – and fashions a winning narrative (itself based on the play 10 Dates with Mad Mary by Yasmine Akram), that proves to be a hugely enjoyable experience.

The Mad Mary of the title is Mary McArdle (Kerslake), recently released from a six month spell in prison. Her best friend is Charlene (Bailey), and all Mary can think about is seeing her as soon as she’s back in their home town of Drogheda. But Charlene is busy with her impending wedding (for which Mary is the maid of honour), and they don’t meet up until the next day. Charlene is a little reserved but blames it all on the preparations for the wedding. She asks Mary to make some of the arrangements, and then adds that she’s given away Mary’s plus one to someone else. Mary protests and Charlene relents, but this leaves Mary in a quandary: she doesn’t have a boyfriend, and doesn’t particularly want one, but as Charlene has inferred she won’t be able to find one, Mary is determined to find a man to go with her. While she sets about going on blind date after blind date, Mary meets Jess (Lee), an aspiring singer who also does wedding videos. 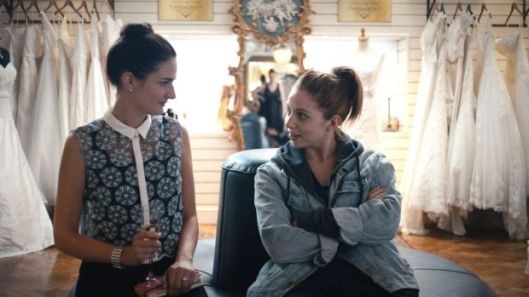 A chance encounter with Charlene leads to Mary telling her she has a man in her life, called John Carter. But he doesn’t exist, and Mary does her best to make him seem real, to the point of persuading a blind date to act as him when Charlene sees them together. Her plan backfires though, and Mary is back to square one. Meanwhile, she becomes friends with Jess, and starts spending time with her when Charlene keeps putting her off. Mary accompanies Jess on a weekend away at a wedding Jess is videoing, and the two become closer. Back in Drogheda, Mary’s behaviour begins to alienate both Jess and Charlene as she struggles to come to terms with her feelings for her old friend and her new one. Things go from bad to worse, and on the night before the wedding she and Charlene have a row that leads to Mary’s best friend telling her a few home truths, home truths that will either aid Mary in moving forward, or leave her powerless to overcome the behaviour that is holding her back.

A Date for Mad Mary is one of those movies that comes along and shows audiences just how easy it is to juggle comedy and drama at the same time, and with an apparent minimum of effort. Director Darren Thornton, along with his co-screenwriter and brother Colin, has done a marvellous job in adapting Akram’s one-woman play (which he also directed), and has opened it up with a keen eye that keeps the focus on Mary and her emotional journey. At the beginning Mary is akin to a tomboy, dressing in a way that de-emphasises her femininity, and wanting to go to clubs and drink a lot. She has a quick temper, and is even quicker to take offence. She can’t understand why Charlene doesn’t want to spend time with her, and can’t see that while she’s been in prison that Charlene no longer wants to indulge in drunken antics and foolish conduct. Mary believes that everything can and should continue as it did before she went to prison, but is missing what seems obvious: that Mary’s prison spell has been a wake-up call for Charlene.

Throughout these early sequences, with Mary being rebuffed by Charlene at every turn and only being included in the wedding preparations if it’s absolutely necessary (Charlene even writes Mary’s maid of honour speech for her), Mary begins to behave more and more like a jilted suitor, acting petulantly and showing her jealousy of Leona (Shanahan), Charlene’s bridesmaid (who does get to spend time with her). Switching her attention to Jess, Mary ends up on a journey of self-discovery, and in doing so, begins to understand that she has to make the same kind of changes that Charlene has. Again, this is a pretty standard template that Thornton has decided on, but it’s tackled with such understated verve that you can’t help but go along with it. Mary is someone we can all identify with, even if we’re nothing like her, because all she wants to do is belong, and being Charlene’s best friend is the only way she knows of achieving this. When Charlene rejects her, she has no way of dealing with the emotional fallout that overwhelms her. But Jess proves to be a welcome distraction…

It’s a measure of Thornton’s confidence in the material that the emerging relationship between Mary and Jess isn’t allowed to dominate the movie’s second half. Instead it plays out in much the way you’d expect but with a bittersweet poignancy that reflects both women’s sense of being alone (though for very different reasons). Mary’s friendship with Charlene remains front and centre, and thanks to both the material and some exemplary work from Kerslake and Bailey, their beleaguered relationship never feels forced or contrived. Kerslake is terrific as Mary, balancing a deep-rooted vulnerability behind a solidly defensive exterior and taking no prisoners when she feels the need to. It’s a role that requires Kerslake to soften gradually and open up more and more, and she achieves this with such acuity and precision that it seems like the most natural progression in the world, and better still, one that you’re not even aware of until it’s happened.

Rating: 8/10 – a comedy drama that is successful in both departments (and then some), A Date for Mad Mary makes a virtue of its familiar set up and provides viewers with enough genuine laughs (particularly one involving Mary’s mother and a sniper) and moments of pathos to keep anyone satisfied; assembled with obvious love, care and attention by Thornton and his very talented cast and crew, it’s a movie that sneaks up on you and makes you oh so thankful that you’ve seen it.