NOTE: This review is based on an IMAX screening of the movie.

At one point during Christopher Nolan’s visually and sonically impressive ode to British heroism, Mark Rylance’s stoic Mr Dawson says, “Men my age dictate this war. Why should we be allowed to send our children to fight it?” It’s a rare moment of unexpected criticism (of the war) in a movie that celebrates the British determination to rescue victory from the jaws of defeat on the beaches at Dunquerke (through Operation Dynamo), and which does so in spectacular style. It’s one of a number of awkward moments where Nolan the writer appears to realise that he needs to be a commentator as well as an observer of events, and that he needs to add some much needed depth to proceedings. It’s also a moment that’s indicative of a greater problem with the movie as a whole: it doesn’t engage with the audience as much as it should do.

Nolan has gone on record to say that his idea for Dunkirk wasn’t to make a war movie but to make a suspense thriller, to take the three strands of land, sea and air and amalgamate them by the end of the movie into one combined incident. It’s typical of Nolan’s fondness for non-linear narratives, and he orchestrates the three different time frames – land: one week, sea: one day, air: one hour – with great skill and ingenuity, but amidst all the technical wizardry, the human element is left just as stranded as the Allied troops were back in 1940. Considering the scale of the evacuation, it’s hard to understand why Nolan decided to leave out such a crucial aspect. Thanks to the narrative decisions he’s made, the characters we do meet rarely make an impact, with patronym Tommy (Whitehead) suffering the most. Right from the start, where we see him fleeing from a barrage of gunfire and his comrades dropping like flies around him, and through all the travails he endures along the way, he’s a character we never fully identify or sympathise with. He’s a cypher in uniform, and Nolan never really introduces us to him.

The same goes for Hardy as RAF pilot Farrier. Once more hidden behind a mask that obscures his lower face, Hardy’s expression barely changes from scene to scene; he either looks determined or very determined. Alas, this isn’t enough to provide audiences with a character to identify with or relate to, and it’s only his heroic manner (which is shared by all but one other character) that allows us to appreciate him. Of all the characters we meet, only Rylance as the quietly resolute Mr Dawson and Branagh as Commander Bolton, overseer of the evacuation at Dunquerke itself, make much of an impact but that’s entirely due to their skill and experience as actors. It’s a shame that Nolan couldn’t have fleshed out his characters more; what’s the point of employing actors of the calibre of Murphy and Hardy when you’re not going to give them much to do?

For a movie maker of Nolan’s stature, this is an unfortunate approach, and it leaves the movie in danger of becoming just an empty spectacle. Nolan has put a lot of time and effort into ensuring his take on the evacuation is as realistically mounted as possible, with a minimal use of CGI and the majority of practical effects being done in camera, and shooting on the very same beaches at Dunquerke. Thankfully this verisimilitude pays off handsomely, with Nolan’s standing as one of the most technically and visually gifted directors of his generation confirmed for all to see. There’s no room for doubt: Dunkirk is a stunning visual experience. Nolan wanted to give audiences the most immersive movie experience possible (albeit in the IMAX format) and he’s succeeded magnificently. Whether it’s on the beach, on the water, or in the air, Nolan, along with DoP Hoyte Van Hoytema, ensures that the viewer is thrust into the thick of things, whether it’s amongst a group of soldiers hemmed in on a jetty while German Stukas strafe them, or Tommy and some of his fellow soldiers stuck below decks in a torpedoed ship, or the cockpit of Farrier’s Spitfire, all these scenes and many more have an immediacy and a visceral intensity that is breathtaking to watch. On these occasions, the movie truly is an immersive experience, and Nolan’s ambition is fully realised. 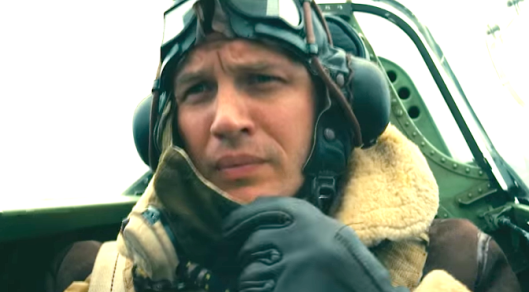 But if Dunkirk looks visually astonishing, then it’s surpassed by its sound design. Every rifle shot and bullet hit, every creak and warp of timber on the boats, every burst and spin of the fighter planes is delivered with such clarity and impact that it adds an extra layer to the immersive nature of the material, and in IMAX 6-track format it’s even more impressive. There are details in the mix that are remarkably subtle as well, such as the different engine sounds of the small ships as they approach Dunquerke, or the trudge of footsteps across the beach. This is attention to detail taken to an almost obsessive degree, and the movie is all the better for it, creating a soundscape that highlights and dominates events shown, and which in terms of fidelity, sets a new benchmark.

Ultimately though (and a little unfortunately), what Nolan has devised and created is a movie that offers an unparalleled viewing and listening experience but which has moments where it seems to be saying, “look at this, isn’t that spectacular?” You can almost imagine a reporter turning to a newsreel cameraman and asking, a la Die Hard (1988), “Tell me you got that.” Nolan can perhaps be forgiven for a little grandstanding, or a little showing off from time to time, but when these moments occur they have the effect of taking the viewer out of the movie and reminding them that what they’re watching isn’t always as immersive as planned. What’s also distracting at times is Hans Zimmer’s score for the movie, which uses Nolan’s own pocket watch as a musical template for much of the tension that’s generated, though it’s a motif that’s over-used. It’s a divisive score, hugely effective on some occasions, an unfortunate pall over proceedings at others, but at least Zimmer stops short of making it all too triumphant and imperialistic – and that adds to the overall effect tremendously.

Rating: 7/10 – aside from some questionable narrative decisions, and restrictions around getting to know the characters, Dunkirk is the year’s most ambitious, and most mature, summer blockbuster; an incredible technical achievement by Nolan, the movie is a visual and aural tour-de-force, a feat of movie making that’s unlikely to be equalled or bettered any time in the near future, and which may well be Nolan’s best movie so far… oh, hang on, no, that’s still The Dark Knight (2008).