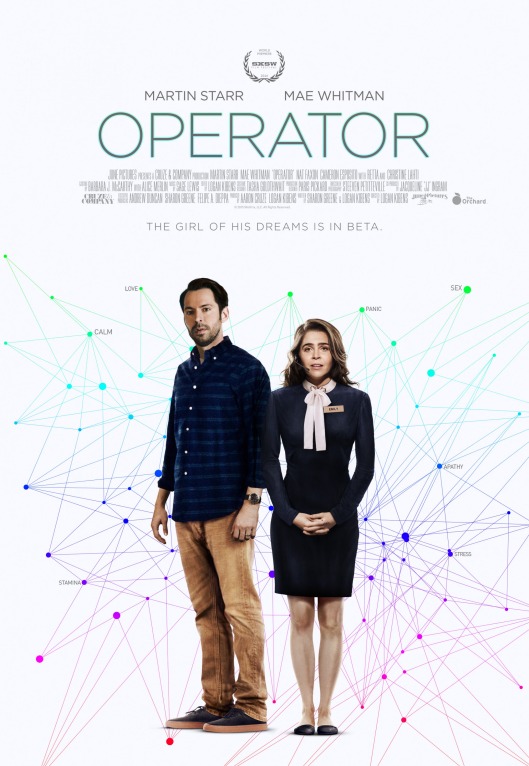 One of modern society’s worst innovations is the automated answering service. You know the drill: you call a company or an organisation and you have to listen to a list of seemingly endless options before being connected to a real live human being. Or worse still, there isn’t a live human being at the end of it at all, as the automated system seeks to wrangle you into fitting your square problem into their round solution. And all the while reminding you that your call is important to the company or organisation that doesn’t want to speak to you in the first place. This technological misstep is at the heart of first-time writer/director/editor Logan Kibens’ Operator, but instead of challenging the system as it exists currently, Kibens is more interested in exploring the idea that an artificial creation can replace a human being on a relationship level.

The movie’s central protagonist is a computer programmer called Joe Larsen (Starr). The company Joe works for is in the doghouse over an automated answering service they’ve created for Welltrix, a medical health organisation. Feedback from customers points to the service, and in particular the choice of phrasing used by the “operator”, as being too clinical and lacking in warmth and sympathy. Charged with finding a voice that is more empathetic (and given a week to do so), Joe hits on the idea of using his wife’s. For Joe, his wife Emily (Whitman), is the perfect candidate: she works as a concierge at a hotel and has a calm, likeable manner that even the most annoyed or angry customer is assuaged by. Emily agrees to help out and she provides Joe and his colleagues with valuable insights into the sorts of things that people like to hear in difficult or challenging circumstances. But when the client likes what they hear and gives the go ahead for Joe’s company to roll out a full programme, Emily’s voice work and successful audition with an experimental theatre group, the Neo-Futurists, causes Joe to grow anxious about the future of their relationship.

His anxiety is exacerbated by his mother, Beth (Lahti), being diagnosed with Addison’s disease, and Emily’s success with the Neo-Futurists. Their individual workloads sees them spending less and less time together, and Joe’s reliance on Emily to ease his panic attacks and feelings of helplessness sees him connecting more and more with the answering system version of Emily than with Emily herself. Able to listen to soothing phrases such as “I’m with you” whenever he needs to, Joe begins to distance himself from Emily, and she in turn becomes unhappy with his growing need to speak and listen to a recorded version of her that, as she puts it, “isn’t her”. But Joe refuses to listen to his real wife and continues to fixate on what he reasons is the ideal version of her. And when Emily vents some of her frustration at the situation through her theatre work – even though she’d promised Joe she’d never use their life together as part of the show – Joe’s inability to understand her feelings and forgive her leads to their splitting up, and Joe becoming more and more fixated on her “replacement”.

Our interaction with others, whether personal, professional, occasional, or unexpected, is a fundamental part of our social awareness, and the way in which we communicate says a lot about our personalities and our view of the world. However, it’s unlikely that many people would obsess about an ersatz person in the way that Joe does, so what Kibens has to do in her script, and which is unfortunate in the way it is presented and in how it develops, is to give Joe a mental health issue right from the start. Joe doesn’t just have crippling anxiety attacks, he’s unable to connect with people in the same way that the original version of the answering service was. He lacks empathy, and talks about regular hopes and fears about relationships – and particularly as expressed by his boss, Gregg (Faxon) – in terms that a research psychologist would understand, but dismissively as well, as if the “data” he’s presenting is obvious. With this in place it’s hard to understand just how Joe and Emily got together in the first place, let alone got married.

By making Joe such an aloof figure – and as the movie progresses he becomes increasingly and disturbingly more insular and emotionally distant – the movie also finds itself struggling to keep him on the right side of sympathetic. That it doesn’t is due to the corner it paints itself into thanks to his obsession, which seems cruel and unnecessarily vindictive. Viewers won’t be surprised by how the movie resolves the breakdown of Joe and Emily’s marriage, as the manner of its resolution is signposted in great big neon letters quite early on, and when it happens it happens just as awkwardly as many other scenes play out. As Joe, Starr tries to play him as both a wide-eyed innocent and an inconsiderate, self-absorbed asshole, but never manages to connect the two successfully, although Joe’s dead-eye stare is impressive by itself. Like Whitman, he’s hampered by the vagaries of Kibens’ screenplay and its lack of dramatic focus, as when Joe’s obsession with the fake Emily is transposed into an addiction that sees him staggering along the street begging strangers to use their mobile phones.

There’s the germ of a good idea here, but Kibens’ lack of experience shows through all too often, and she’s unable to smooth over the cracks that pepper her screenplay. Starr and Whitman make for a nice couple, and their early scenes together have a lightness of touch that’s appropriate for what looks set to be a romantic comedy, but when things become darker, Kibens’ direction becomes less convincing. At this stage, the change in tone may put off some viewers, but with Kibens trying and failing to make clever statements about technology and our dependency on it, and its invasive nature, it becomes a moot point altogether. Add a tired storyline that centres around Gregg’s getting fit to impress an ex-girlfriend who’s now a lesbian, and the inclusion of Joe’s mother falling ill (which leads nowhere other than to explain why Joe is the way he is), and you have a movie that appears to have a lot going on, but which on closer inspection, doesn’t really amount to much.

Rating: 5/10 – a tighter and more focused script would have allowed Operator to make more cogent points about our dependency on modern technology, but Kibens doesn’t have as sure a handle on things as she needs; more confident in its humour than its drama, the movie is bolstered by a charming score by Sage Lewis, and Esposito’s turn as a Neo-Futurist with a severe haircut and bags of attitude, but even with these positives to help it along, it’s a movie that stutters too much in its execution to prove as rewarding as it should.