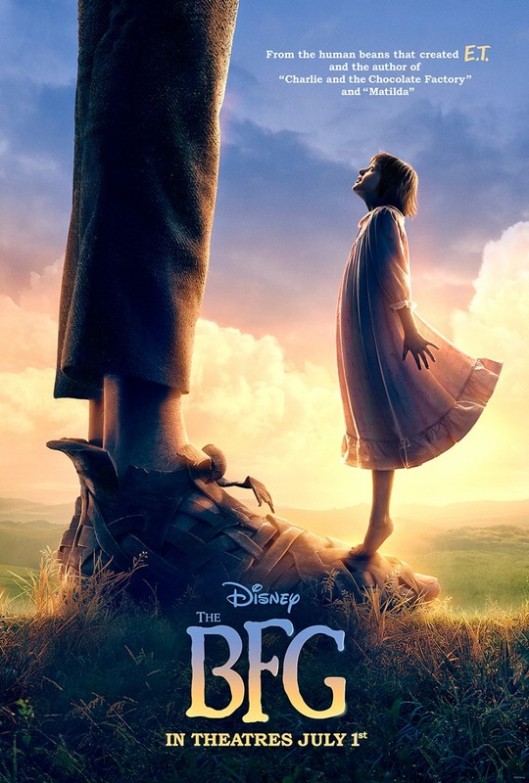 Steven Spielberg meets Roald Dahl against the backdrop of a billion computer generated pixels – less a case of “Who could ask for anything more”, and more a case of “Be careful what you wish for”. This is very much a movie where the child in Spielberg has been sat on and made to go without his dinner. While this is a movie that looks absolutely stunning – in Giant Country at least, London feels drabbed down in comparison – and there’s a richness to the colours and the detail that few other directors would have achieved for their movie, overall The BFG lacks something that has been a consistent part of Spielberg’s directorial skills over the last forty-plus years, and that’s honest, heartfelt emotion.

It’s an odd feeling to realise, but this is a movie where Spielberg has managed to avoid creating an emotional connection between the characters and the audience. Right from the start, and from our first encounter with tomboyish Sophie as she hides under a rug late one night at the orphanage (handily called the Orphanage) where she lives, what should be a tale that inspires various levels of child-friendly awe and wonder, does so in dribs and drabs, and rarely feels inspired or inspirational. Even the moment when Sophie spies a large, very large hand righting a fallen rubbish bin – which should provoke a degree of wonder all by itself – plays out plainly and matter-of-factly. The scene would have played out much the same if it the bin had been knocked over by a cat, and the cat had turned round and picked it up by itself. It’s the first of many moments that fail to achieve the necessary degree of childish delight that would allow viewers – and not just adults – to connect with the material.

Elsewhere, the relationship between Runt (the BFG in question) and Sophie soon develops into the kind of easy-going father-daughter dynamic that allows for few disagreements and full-on harmony. Both of them may be unlocking nurturing instincts in each other, but Melissa Mathison’s adaptation of Dahl’s hugely popular novel foregoes any depth and relates everything in a matter-of-fact manner that leaves their relationship feeling perfunctory instead of earned. While it’s expected that they hit it off and prove to be firm friends, there’s still little in the way of any grounding to their friendship, and it happens with barely a whisper of discord between them. Even when Runt tells Sophie she can’t go back to the orphanage, her reaction has all the impact of a child being told that they can’t have semolina for dessert. It’s another example of the way in which Spielberg’s direction can’t elevate the material and make the movie more interesting. Instead it ambles along, creating indifference for long stretches and relying heavily on Rylance’s performance as the BFG.

Rylance, who has become Spielberg’s first choice, go-to actor since they made Bridge of Spies (2015), is on terrific form, his motion capture performance perhaps the very best thing the movie has to offer. Whether he’s muttering and mumbling about snozzcumbers or frobscottle, or a myriad of other Giant-ish terms, Rylance’s simple, delicate portrayal is affecting and whimsical, an object lesson in how not to let a CGI conversion take anything away from the performance itself. But thanks to Spielberg’s puzzling detachment from the material, Rylance’s portrayal is operating in a vacuum, separated from the rest of the movie by an invisible wall that even he can’t penetrate. It’s like giving the world’s greatest footballer the chance to score from five yards out, and then removing the goal just before he shoots.

On the performance front, Rylance is surprisingly alone in terms of the quality of his portrayal. Elsewhere, there are problems galore, from Barnhill’s stilted line readings to Wilton’s wide-eyed and easily dismayed Queen of England, to Hall’s unexpected and underwhelming turn as the Queen’s maid (a role that could have been played by anyone, such is its importance to the story). And that’s without Clement’s turn as chief unfriendly giant, Fleshlumpeater, a performance that leaves him sounding like David Walliams with a bad nasal infection. Rylance aside, this is a movie where the cast aren’t given much to do, and the imbalance between the success of his efforts and theirs is telling. This is largely the fault of Mathison’s screenplay, which maintains its focus on the BFG at all times, and to the detriment of the other characters, who feel unsupported and under-developed at the same time.

This being a Roald Dahl story, there should be plenty of subtexts shoring up the main plot, and the notion of Runt and Sophie creating their own family as a way of confronting their sense of being alone should be one of them, but instead of informing their bond and its importance to both of them, it’s given an occasional and brief acknowledgment before the movie heads into another visually impressive but empty bout of physical comedy. Said comedy is a mix of pratfalls – cue those loveable cannibal giants! – incredible shrinking orphan moments, and CGI corgis, and these should find favour with viewers younger than ten. But adults, for whom Dahl wrote just as much as he did for children, will find themselves curiously locked out of the garden of delights that have been broadly assembled out of Mathison’s screenplay. A movie then that’s lacking in too many areas for it to be entirely or even moderately successful in its ambitions, a state of affairs that is all the more surprising given the quality of the source material and its director’s affinity for children’s fantasy.

Rating: 5/10 – a movie that’s easy to admire but very difficult to engage with, The BFG sees Spielberg operating at half throttle, and dialling back on the emotional elements of Dahl’s story; Rylance is the key player here, giving a captivating performance and anchoring the movie in a way that he shouldn’t have to given the quality and the experience of the rest of the cast, and the very talented crew.