Yet another true story where the emphasis is on reinventing the story, American Made arrives in the wake of possibly Tom Cruise’s worst movie ever, a movie so bad it may just have killed off an entire franchise before it’s even begun. In many respects, The Mummy (2017) was a little outside of Cruise’s comfort zone, and the movie’s attempts to shoehorn Cruise’s increasingly broad style of acting into its mix foundered after his first scene. But the true story of Barry Seal, however much it’s rewritten and reinvented, is a project that does give Cruise the chance to redeem himself for recent mistakes. So – does he?

Predictably, the answer is both yes and no. When given a script and a character that stretches him as an actor, Cruise always finds a way to meet the requirements of the role, but in the past decade the only movie that’s come anywhere near to pushing him as an actor has been Valkyrie (2008), where he played another real life person. Otherwise, Cruise has been content to, well, cruise his way through a number of high concept features that may have cemented his credentials as an action hero, but have also allowed people to forget that, once upon a time, he was an actor who took quite a few chances with his career. Now, he works to protect his action hero status, while taking the occasional time out to play the likes of airline pilot turned drugs smuggler Barry Seal. Here, Cruise gets to turn on his megawatt smile, have a lot of fun, and give his fans exactly what he thinks they want to see: a man in his mid-Fifties behaving as if he was twenty years younger (thank goodness there’s only Seal’s wife, Lucy (Wright) to worry about on the female side).

While Cruise is still able to play the fun-loving ne’er-do-well with a heart of gold and a winning smile, here it’s in service to a real-life person who wasn’t exactly the charming good ole boy which is Cruise’s – and the script’s – interpretation. But like a lot of movies “based on a true story”, the makers are only concerned with getting it right when they do so accidentally, and where the “spirit of the thing” is more important than telling a factual story (which would have been more interesting). Barry is outed early on by outwardly diffident CIA agent, Monty Schafer (Gleeson), when he’s a TWA pilot smuggling Cuban cigars into the country for peanuts. Faced with an offer he doesn’t want to refuse, Barry goes to work for the CIA using one of their planes to take reconnaissance photographs over South America. When the Medellin Cartel becomes aware of Barry’s activities, they persuade him to transport drugs back to the US. Thus the next few years of Barry’s life involve him trying to ensure that neither side finds out about what he’s doing, while he stashes away his ill-gotten gains by the trunkload.

Of course, things begin to get out of hand, whether it’s the cartel’s demands for more smuggled product, or the arrival of Lucy’s wastrel younger brother, JB (Jones), whose light fingers eventually cause Barry more problems than he’s worth. Soon, a whole raft of law enforcement departments descend on Barry and they all try to claim jurisdiction. But in a twist that nobody, let alone Barry, could have anticipated, certain jail time is replaced by community service, and the chance to juggle gun-running with drugs smuggling and money laundering proves too much of an opportunity for Barry to pass up, and though there’s the small matter of providing evidence against the cartel – one of whose members is the easily irritated Pablo Escobar (Mejía) – Barry goes along with whatever he’s asked. 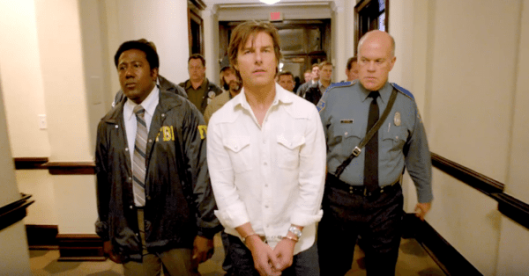 The tone of American Made is one that says it’s okay to be a criminal if you’re having fun while you’re doing it, and as long as you’re providing for your family then that’s okay too. It’s hard to take a movie like this seriously when it won’t take the basis of its real-life story seriously either. It’s a movie that wants to have its cake and eat it… or in this case fly its drugs and snort them. It’s a cavalier approach that wants to attract audiences with its freewheeling approach and carefree attitude, and though there’s nothing wrong with a bit of harmless escapism from time to time, this is ultimately a movie that glamourises crime for the sake of it, and which encapsulates its approach to the material in the scene where a recently arrested Barry promises Cadillacs to a group of law enforcement officers before being allowed to go free. “Should have taken the Caddies,” he quips as he leaves, and in doing so, reveals for anyone who wasn’t sure, just how serious the movie is about celebrating its hero’s misdeeds and moral laxity.

But while Cruise is clearly having fun, the same can’t be said of the rest of the cast. Gleeson’s spook pops up every now and then to drive the plot forward and give Barry his next set of Government-sanctioned shenanigans, while Wright plays his long-suffering wife with some style, but remains as vapid at the end as she is at the start (and she adapts to her husband’s new “career path” with undue haste). Jones is the only other character to make an impact, and strangely, his pale, lank-haired appearance gives the narrative a much-needed boost whenever he’s on screen. In comparison with the rest of the cast, Jones is practically a major supporting character, and everyone else does a perfunctory job of playing to the script’s demands for a host of generic role players. Liman, reuniting with Cruise after Edge of Tomorrow (2014), keeps things moving, and tries to imbue Gary Spinelli’s script with an energy that he believes can only be achieved in fits and starts. And with so much of Barry’s story remaining at odds with official versions, it remains a frustrating movie to watch, and not just for the awkwardly structured narrative, but for the compelling notion that Barry Seal’s story would have been better served as a straight-up drama than as a low-key comedy.

Rating: 6/10 – another movie built around Cruise’s action comedy persona (but with the action dialled right down), American Made is a lightweight, easily forgettable look at a period in US law enforcement where deals were struck with almost anyone if it provided even the slightest benefit to the US; with too many scenes that pad out the already generous running time, the movie has a tendency to coast when it should be sprinting, and it never really puts its central character through the wringer – until the end, that is.