What price is fair to have freedom of the press? What would you sacrifice in order to have a body of men and women whose job it is to expose the venality and the lies of the great, the good, and the powerful if those people were less than honest in their dealings with you? How important would it be to have that kind of buffer between those who would deliberately harm you and ignore your rights as an individual in their efforts to impose their world view on you and the people around you? And how grateful would you be to those men and women if they exposed the great, the good, and the powerful, and showed them for the self-serving string-pullers that they really are? Would you fight for them when they themselves came under attack? Would you stand with them, and say, no more? Would you, deep down, have such a sense of disgust that you’d want to do something about it all, if the opportunity arose?

In our heads, yes, absolutely. In reality, though… Brian Knappenberger’s thought-provoking, and yes, one-sided documentary, asks those questions in a roundabout way by looking at two examples of occasions where the free press in America has been soundly bodyslammed by those who would see it reduced to a toothless adversary that can be easily dismissed in the courts. The first up is Bollea vs Gawker, where the wrestler known as Hulk Hogan (Terry Gene Bollea) sued Gawker Media, publisher of the Gawker website, for posting parts of a tape that showed Bollea having sex with the wife of one of his best friends, radio personality Bubba the Love Sponge (only in America…). Bollea made several attempts to have the clips removed from the Gawker website, until he finally got a Florida state court judge to grant an injunction which Gawker quickly ignored. The case went to trial, Bollea convinced a jury that the release of the images had caused him emotional distress, and even though he’d spoken about the tape in an offhand way as Hulk Hogan, this was just Bollea being in character and his, basically, playing a part. The jury sided with Hogan, awarded him an unprecedented $115 million in compensation, and a further $25 million in punitive damages. This effectively bankrupted Gawker, and its owner, Nick Denton. 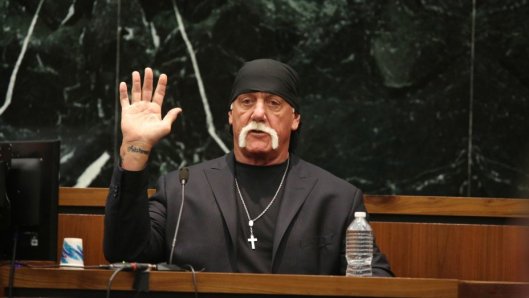 While Bollea’s win sent shock waves through the press community – the courts have basically set a precedent whereby they can now determine what is newsworthy and what isn’t – people began to ask how Hogan had been able to afford to pursue the case through the courts in the first place (Bollea wasn’t in the best of financial situations). Step forward billionaire Peter Thiel, a man with a grudge against Gawker ever since they had outed him in an article in 2007. Thiel described his support for Bollea as “one of [the] greater philanthropic things that I’ve done”. Thiel’s deliberate targeting of Gawker has sent alarm bells ringing through the press community, and not least because he and newly elected US President Donald Trump share the same disparaging opinion of the press that could lead to the kind of restrictions on reporting that will serve only those who don’t want journalists prying into what they’re doing behind closed doors.

As if that outcome was bad enough, a stealthier and more disturbingly effective curtailment of the press occurred in Las Vegas in 2015, when casino magnate Sheldon Adelson secretly purchased the Las Vegas Review Journal. When he did so, he denied that he’d done so, and the management team kept this information from their staff. But journalists being journalists, they started digging, and it wasn’t long before the whole “secret” was exposed in an article published in the Review Journal. The outcome? All the staff involved in the article were forced to step down, with compliments from the new owner. Adelson and his family now control one of the biggest news outlets in Nevada; and for them that’s a good thing. For the journalists who worked there, such as John L. Smith and Mike Hengel, their decades of good work has been dismissed for no other reason than that they were (too) good at their jobs.

In examining these cases, Nobody Speak: Trials of the Free Press acts best as a warning cry against the perceived threat from big business when it doesn’t like what it sees and reads. More worrying than the way in which the freedom of the American press appears to be being eroded, is the way in which these recent attacks appear to be precursors of worse times to come. Knappenberger makes it clear: this is only the beginning unless the US press is very, very careful, and especially now that the US has a President who regularly refers to them as “liars”, and who, during his Presidential campaign, blocked several news outlets from obtaining press credentials (it’s no surprise that these news outlets had been critical of Trump). There’s a palpable sense that big business in America feels that it shouldn’t have to justify itself to the people, and that if it’s challenged it will do everything it can to ensure that it’s never challenged again. And if it means deconstructing the First Amendment of the Constitution then that doesn’t appear to be a problem. (On that point, Knappenberger cannily includes footage of Trump’s inauguration, and his solemn promise to “preserve, protect, and defend the Constitution of the United States”.)

Whatever your feelings about the press, either in the US or in your own country, what matters most is that journalism has an important place in our societies, and when it’s being treated as an inconvenience by those with too much money and influence, then it’s all the more important that we protect it. Knappenberger makes it clear: these are perilous times, and the warning signs are there, and in some respects there are too many. His documentary may not provide the likes of Thiel and Trump a direct chance to make their positions clear, but there’s no need: they’re on the record already. And how do we know what their positions are? Because the press has reported them, accurately and fairly. Is there bias in journalism? Yes, of course there is, but what gets lost in all the arguments going back and forth is something that this movie reminds us time and again: a fact is a fact, and no matter how much some people may not like it, we all have a right to be made aware of any facts that have the potential to affect us and our lives, and especially when someone wants us to remain in the dark.

Rating: 8/10 – a solid, but pessimistic look at the state of contemporary journalism in the US, Nobody Speak: Trials of the Free Press is a cautionary tale that should have viewers wondering if taking the press for granted might not be the best way forward; with contributions from the likes of Gawker owner Denton, and Review Journal writer Smith, Knappenberger’s pensive examination of the hidden mistreatment of the press is salutary and unnerving, and deserves a wider audience than it’s likely to receive.