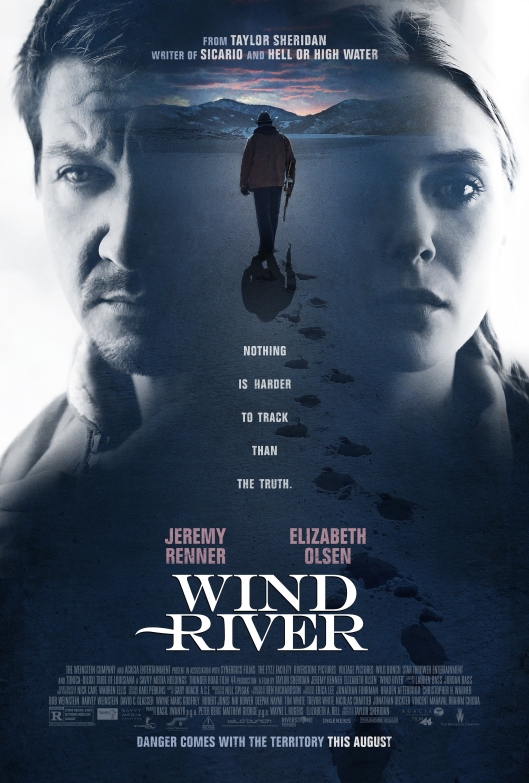 The Wind River Indian Reservation is situated in Wyoming’s Wind River Basin and occupies an area of nearly three and a half thousand square miles. It’s surrounded by the Wind River Mountain Range, the Owl Creek Mountains and the Absaroka Mountains, and temperatures can drop to a point where rapid breathing of the cold air can cause death by pulmonary haemorrhage. It’s also a place where the lives of its Native Americans are blighted by a persistent drug problem and sense of aimlessness amongst its youth. These points are all worth bearing in mind when considering the merits of Wind River, the latest movie written by Taylor Sheridan, and his first as a director. Sheridan is responsible for the screenplays for Sicario (2015) and Hell or High Water (2016), two very impressive movies indeed thanks to his contributions, and this, his latest, is equally as impressive (if not more so).

This is a movie where the locations are just as important as the characters themselves and the tangled narrative that they inhabit. The backdrop for a tale of rape and murder that takes place on tribal lands, Sheridan takes the inhospitable nature of the reservation in winter and uses it as a way of examining the issues affecting the tribes people who live there, and to provide an unforgiving environment against which the plot unfolds. It begins with an eighteen year old called Natalie Hanson (Asbille) as she flees across the snow, panicked and bloody. Eventually she collapses and lies still, and remains there until she’s discovered the next day by US Fish and Wildlife agent Cory Lambert (Renner). Lambert reports his discovery to Ben (Greene), the tribal chief of police, and he in turn alerts the FBI. Their response is to send rookie agent Jane Banner (Olsen), who arrives completely unprepared for the harsh winter weather, and who has no awareness of, or background in, Indian affairs.

Banner hopes that an autopsy will prove that Natalie’s death was murder but the cause of death, pulmonary haemorrhage, won’t support that contention. Unable to bring in a full FBI investigative team, Banner decides to enlist Lambert’s help in finding out what caused Natalie to be so far from the nearest shelter. They learn from her brother, Chip (Sensmeier), that Natalie had a new boyfriend, a security guard at a nearby oil drilling site. Lambert discovers the track of a snowmobile that leads up into the mountains. He and Banner follow the track and find the naked body of a male that’s been ravaged by the local wildlife. Eventually, Banner and Ben, along with a few local deputies and members of the tribal police visit the oil drilling site on the pretext of wanting to speak to Natalie’s boyfriend, who they now know is called Matt (Bernthal). But the security guards that greet them begin behaving suspiciously, and while Banner staves off an armed confrontation between them all, Lambert is up in the mountains where the male body was found, and where he also finds a snowmobile track that leads down to the oil drilling site…

Wind River is a tough, uncompromising thriller that doesn’t stint on the emotional lives of its characters, even allowing the viewer a glimpse of the life that Natalie could have enjoyed if she’d lived, and it’s this approach that helps to anchor the murder investigation that drives the movie forward. Lambert agrees to help Banner because his daughter also died of exposure in the snow three years before, and he wants to assuage his feelings of guilt at not being able to save her. Lambert uses his skills as a tracker to piece together the events that led to Natalie’s murder, and with step he takes, Renner’s thoughtful, subdued performance allows the viewer to see his sadness slip slowly from his shoulders until he’s in a position to offer advice to Martin (Birmingham), Natalie’s father, that is both affecting and heartfelt. Aside from his supporting role in Arrival (2016), Renner hasn’t exactly been best served by the roles he’s taken over the last few years, but his portayal of the taciturn Lambert is one of his best, and a reminder that when he’s given the right material he can be very good indeed.

Sheridan is also careful to make Banner not just a fish out of water, but someone doing their best in a situation that isn’t ideal for them, but which is pushing them beyond their comfort zone. From arriving unprepared for the harsh weather conditions to the point where she begins to understand both the environment and the social climate of the reservation, Banner visibly grows as a character, and Olsen also reminds viewers that she is one of the best actresses of her generation. Displaying a tough determination, and a commitment to finding the truth, Sheridan and Olsen use Banner’s inexperience as a way of bringing out the clues and the details of Natalie’s murder and making them as fresh for the audience as they are for her. Though Lambert is nominally the lead character, and discovers said clues and details, we still see the bulk of the investigation through Banner’s eyes, and we also see the effect that it has on her throughout.

But while Sheridan concentrates on the characters, even to giving us brief moments that tell their stories concisely and effectively, he doesn’t lose sight of the mystery he’s created and the narrative structure that allows it to unfold at a pace that doesn’t disappoint in terms of detail or leaves the viewer feeling as if they’re being led by the nose. Given the bleak (yet beautiful) nature of the environment, it’s unsurprising that there are some harsh, and somewhat brutal outbursts of violence, and the fate of one character has a pleasing, Old Testament eye-for-an-eye feel to it, but again it’s all in keeping with the milieu that Sheridan has created, and there’s an appropriate sense of nihilism that infuses the movie and keeps any sentimentality at bay, particularly in relation to the fractured outlook of its young Native Americans.

Behind the camera, Sheridan has enlisted the aid of a number of collaborators whose contributions add further lustre to the quality of the movie, and without whom this may not have been as successful. There’s Ben Richardson’s rich, detailed cinematography that also highlights the vastness of the Wind River Basin and its austere, wintry beauty, and a beautifully expressive score by Nick Cave and Warren Ellis that is both unobtrusive and eerily soulful at the same time. These collaborators, along with production designer Neil Spisak and editor Gary Roach – and many more – all help make the movie a hugely rewarding and outstanding feature debut for its writer.

Rating: 9/10 – a near perfect combination of mystery thriller and cleverly mounted character-driven drama, Wind River succeeds on so many levels that it would be churlish to say otherwise; Sheridan just keeps on getting better and better, and he draws out terrific performances from his two leads, making this one of the more worthwhile movies out there, and deserving of far more awards than just Sheridan’s Un Certain Regard Director Award at Cannes this year.