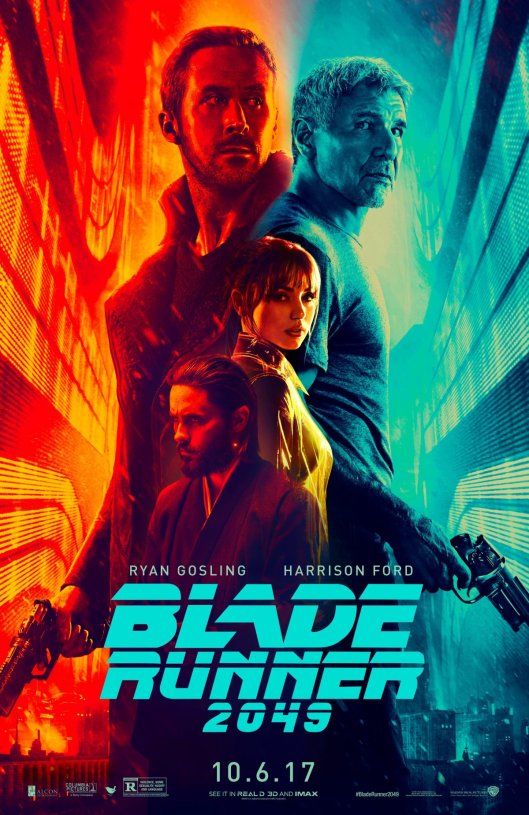 Perhaps the most anticipated sequel of 2017, Blade Runner 2049 is finally with us, having been in development – in one form or another – since 1999. It’s a fascinating movie to watch, built as it is on the legacy of its predecessor, and it’s received a lot of praise from critics and fans alike. But it’s not entirely successful in the goals it’s set itself, and despite some terrific performances, Villeneuve’s inspired direction, and sterling efforts from all concerned with the movie’s look and design, the movie struggles at times to maintain proper focus and to make more of its story elements than it actually does. The style is tremendous, then, but the story it supports isn’t as well worked out as it initially looks. Partly this is to do with decisions made at the pre-production stages, and partly to do with a script – by returning scribe Hampton Fancher, and Michael Green – that rarely tries to flesh out its themes or tease out the inherent subtleties within them. This is being touted as intelligent sci-fi and a worthy successor to its predecessor (and on the whole, it is), but in reality it’s a movie that looks amazing, but can’t make its mind up about the story it wants to tell.

It seems straightforward enough. Modern replicants are now being used as blade runners, and are tasked with tracking down and eliminating any remaining Nexus-8 models that are still out there. K (Gosling) is one such replicant, and he’s generally regarded as good at his job. But then what should be a simple “retirement” throws up an unexpected development in the form of buried human remains. But the truth is stranger still: the bones are those of a female replicant who has given birth, something that was, and is still, regarded as impossible, due to it not being a part of their bio-engineering. K’s superior, Lieutenant Joshi (Wright), fearing such information would be catastrophic if it were made public, orders K to destroy all evidence relating to the case, and locate and kill the child. K visits replicant manufacturer Nyander Wallace (Leto), who identifies the remains as those of Rachael, a replicant who thirty years before, had an affair with a blade runner called Deckard (Ford). Wallace, who can’t manufacture replicants fast enough to match the demand for them both on Earth and on the Off-Worlds, instructs his enforcer, Luv (Hoeks), to follow K and locate the child before it can be “retired”.

And so the stage is set for a race against time in the search for the child (now clearly an adult but referred to as a child throughout). Except Fancher and Green’s script isn’t too concerned about this, and despite the amount of time it’s taken to set it all up. Instead we’re treated to extended passages concerning K’s relationship with a hologram called Joi (de Armas), evidence that K might be the child everyone (including himself) is seeking, meditations on the nature of memory and its veracity, an encounter with what could charitably called the Popular Replicant’s Front of Judea, and further oblique references to Joshi’s insistence that social upheaval will be the result of the child’s existence being made public. Some of this is interesting on a superficial, let’s-not-think-about-this-too-closely level, but that’s also why it remains at a superficial level. The idea that there’ll be a breakdown in the way that replicants are treated comes only from Lieutenant Joshi, but as there doesn’t seem to be anyone that she reports to (she and K could be the only two people in the blade runner department; we never see anyone else), this can only be looked on as her assumption, or her prejudice. But as neither idea is addressed or delved into, the viewer is left with the understanding that if she hadn’t raised it conveniently as an issue, then the movie would struggle to provide audiences with a strong plot.

Out of this, there’s still the confusing issue of whether or not replicants having children is a good or a bad thing. With nothing to suggest that it’s a bad thing – even though the viewer is asked to go along with this idea on faith alone – the fact that Wallace wants to crack this particular genetic anomaly in order to beef up his workforce in the off-world colonies (which would be a benefit for everyone), doesn’t seem such a bad idea at all. But the script insists that he has to behave badly in order to solve this issue  and move forward (actually Luv behaves badly, and deliberately so, while Wallace is confined to the sidelines for much of the movie). As a result, tension and discord amongst the characters is encouraged instead of any détente, and once K finds Deckard hiding out amid the ruins of Las Vegas, the movie remembers it’s also a thriller as well as a romantic drama (K and Joi), and it ramps up the action accordingly.

From this it could be assumed that Blade Runner 2049 is a movie that doesn’t make a lot of sense when you look at it closely – and this is true. Fancher and Green’s script doesn’t always delve as deeply as it could do, particularly as replicants are still being treated as slave labour, a situation that should resonate but which is soundly ignored. But fortunately, the movie has Villeneuve as its director, and if he’s not able to smooth overt the cracks in the plot successfully, what he is able to do is make this sequel one of the most visually impressive movies of the last five/ten/fifteen (delete as applicable) years. Along with DoP Roger Deakins, Villeneuve has created a world that has devolved even further in the last thirty years, and which is alternately breathtaking and disconcerting. Dennis Gassner’s production design should be singled out for praise as well, as he makes every last aspect of 2049 life feel immediate and yet compromised, as if everyone is living in a world that’s becoming more and more withdrawn from their day-to-day reality. Large areas surrounding Los Angeles are now wastelands to varying degrees, and there’s still that perpetual rain to remind you of how bad things have remained, and the movie widens its horizons appropriately as it tells its bigger, broader story.

There are good performances throughout, with Gosling proving a good choice as K, his initially blank features slowly giving way to pained resignation mixed with profound hope as to his possibly being “the child”. It’s another outsider-looking-in portrayal, the kind of role that Gosling is so good at playing, and here he doesn’t disappoint. Ford is terrific as well, reconnecting with a role that he hasn’t played in thirty-five years but which he infuses with a grizzled intensity, and a great deal of sympathy. It’s good to see him embracing a part in a way that, Han Solo aside, he hasn’t done for quite some time. There’s great support from the likes of de Armas (in a role that is intended to make K’s replicant nature more human, but which remains surplus to requirements, no matter how hard the screenplay tries), and Hoeks as the movie’s resident replicant psycho. Leto wears odd contact lenses that contribute to his character’s blindness, and aims for urbane but still bizarro villain and largely succeeds thanks to his decision to underplay the role, while Wright, ultimately, is given too little to do other than repeat dire warnings about the child etc. etc.

A sequel to Blade Runner (1982) may have been on a lot of people’s wish lists over the years, but now that it’s here, there’s something of a temptation to praise it for what it does do – look astounding on too many occasions to count, have a score that complements Vangelis’ original score while being its own thing, create several worlds in one – instead of admitting that what it doesn’t do harms it too often (and on a couple of occasions, irreparably). Yes, it’s an incredible movie visually, and the makers should be congratulated, and awarded, for their efforts, but the script isn’t as convincing as it could have been. Still a movie to watch on the biggest screen possible (though not in 3D, which doesn’t add anything to the experience), and one to discuss for some time to come, this is one sequel that could have been bolder in its approach, and more complex in its ruminations.

Rating: 7/10 – though hugely effective for long stretches, Blade Runner 2049 does get bogged down in too many needless secondary plot lines during its middle section, but rallies to provide an exciting action sequence that rounds things off satisfactorily (even if it’s a long time coming); with many scenes that could have been trimmed or excised altogether, this is still a triumph for Villeneuve and his two male leads, and serves as another example of a movie that strives to be different from the rest of its multiplex brethren, even if it’s not fully successful.