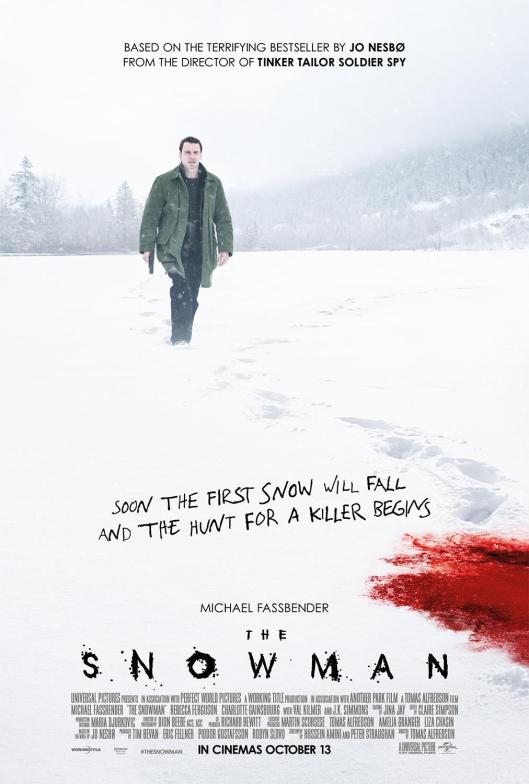 Another week, another literary adaptation, another disappointment… Sometimes it’s hard to understand just what happened when a movie based on a well regarded novel hits our screens with all the turgid urgency of dripping sludge. Who do you blame? The director? Maybe. They are in overall charge of how the movie looks and sounds and how thrilling or dramatic or funny or affecting it should be. Or maybe it’s the screenwriter(s). Maybe they didn’t “get” the novel or work out the best way of transferring it to the big screen. Maybe it’s the cast. Maybe they weren’t “feeling it” and couldn’t find their way to putting in good performances. Or perhaps it’s just something a little less tangible, the tone perhaps, or the pacing, or the emotion of the piece. Maybe – maybe – it’s a combination of all these.

That certainly seems to be the case with The Snowman, an adaptation of the novel by Jo Nesbø, and the first movie to feature his troubled detective, Harry Hole (played here by Michael Fassbender in a portrayal that seems based around Hole having only the one expression). Now, if you’ve read this paragraph up til now and you’ve been pronouncing Hole as in a hole in the ground, then you have the first problem that the movie can’t or won’t overcome: no one can even pronounce the lead character’s name correctly. Harry’s surname is pronounced Ho-ly as in holy scripture, or as with this movie, what the holy hell is happening? When the makers of a movie can’t even get the lead character’s name right, then what chance does the rest of the movie have? In short, hardly any chance at all.

A rushed production that finished shooting in April 2016, but which required reshoots in the spring of this year, the movie quickly gets bogged down by the requirements of a muddled script that wants to be regarded as another excellent example of the awkwardly named Scandi-noir. All the elements are there to be ticked off one by one: the dark, brooding lead detective, the dark, brooding atmosphere, the dark, brooding nature of the murders, the killer’s dark, brooding psychological profile, the dark, brooding visual backdrop – clearly if it wasn’t dark and brooding then it wasn’t allowed to remain in the screenplay. But just as having too much of a good thing can spoil that very same thing, having too little in the way of structure, common sense and thrills can also damage a movie’s chances, and The Snowman sabotages its own semi-focused ambitions at every turn.

For a thriller that should grip like a vice, there are just too many risible moments that offer unfortunate injections of humour, such as when James D’Arcy’s character reveals that he’s “infertile. I can’t have children”, just to make sure there’s no one in the audience who won’t understand what infertile means. Then there are the dreadful, logic-takes-a-beating moments such as when the killer uses a mobile phone they know the police will be monitoring to help them pin the blame on someone else, but who then forgets that they can be traced through the use of another mobile phone later on. Scenes come and go that don’t always follow on from each other (though it’s more disheartening to think there might be a longer Director’s Cut out there somewhere), and Harry’s maverick cop activities keep him in the front line no matter how often he acts independently of the rest of the Oslo police force, while Rebecca Ferguson’s impassioned rookie, Katrine, gets sidelined the first time she uses her own initiative. Some of this is in service of the plot, but mostly it just seems that in piecing together the key points of Nesbø’s novel, screenwriters Hossein Amini, Peter Straughan, and Søren Sveistrup have decided to only include the events from every other chapter in the novel, and not adapt the novel as a whole.

Characterisations suffer too as a result of this approach, with Harry’s alcoholism only of any relevance in introducing him to the audience, and to provide a degree of drama surrounding his continual inability to spend time with the son (Yates) of his old flame, Rakel (Gainsbourg). Being an alcoholic isn’t allowed to get in the way of showing just how good a detective Harry really is, and so it becomes less and less effective as a character defect the longer the movie goes on. Likewise the relationship between Harry and Rakel is confusing because there’s no back story for the viewer to latch onto (it might have helped if the producers had decided to adapt the first book in the Harry Hole series, instead of the seventh). The killer’s motives remain vague and unconvincing throughout, and their need to build a snowman at the scene of each crime is as baffling at the end as it is at the beginning. It’s as if it’s use as a signature “flourish” by the killer is all that’s needed. (A reason for it? Ah, don’t worry about it; it’ll look cool.)

Alfredson has spoken about the challenges of making the movie within a short period of time, and without a completed script, leading to issues that were discovered in the editing suite. But while it does seem that there are huge gaps in the narrative, and the movie has to work extra hard to maintain any tension or sense of urgency, it’s the flatness of the drama and the lethargy in certain scenes that can’t be explained away just because of a shortened production period. In the end, Nesbø’s page-turner has become a movie that fails to match up to its energy and verve, and which remains a leaden, dreary experience for the viewer. The performances are adequate (though Kilmer, worryingly, looks as if he’s trying to impersonate present day Gary Busey), and Dion Beebe’s cinematography does at least capture the beautiful isolation of rural Norway in often stunning fashion. But otherwise, this is a routine, formulaic serial killer movie that does itself no favours from beginning to end.

Rating: 4/10 – muddled and convoluted aren’t words that any potential viewer wants to hear, but they describe The Snowman perfectly; uninspired and chock full of thriller clichés, the movie stumbles along trying to be clever and effective, but instead ends up putting a finish to any notion of an intended Harry Hole franchise.