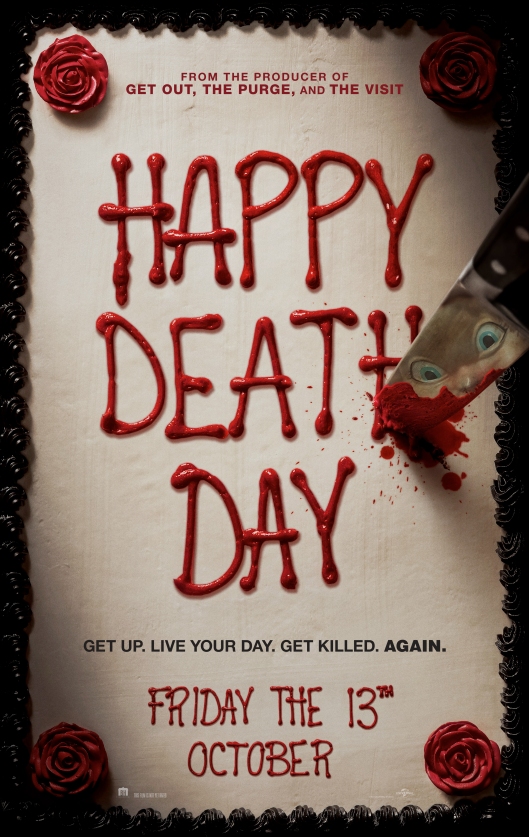 Yes, it’s another horror-themed variation on Groundhog Day (1993), with Tree forced to relive her birthday over and over again until she can discover the identity of her killer. Along the way there are plenty of red herrings, almost everybody she knows is a suspect at one time or another (even her father for a few moments), and her efforts to avoid being killed are entirely a waste of time. Eventually she manages to persuade Carter of what’s happening to her and he suggests that she use each day to work out who the killer could be. Of course, he doesn’t know he’s done this and so Tree is still left to work it all out for herself, and when one attempt leaves her in the hospital and not dead somewhere, she becomes aware of the presence, at the hospital, of a serial killer, John Tombs (Mello), and becomes convinced he’s her killer. But that particular idea leads to a quite different revelation, one that provides the movie with its inevitably obvious twist in the tale. 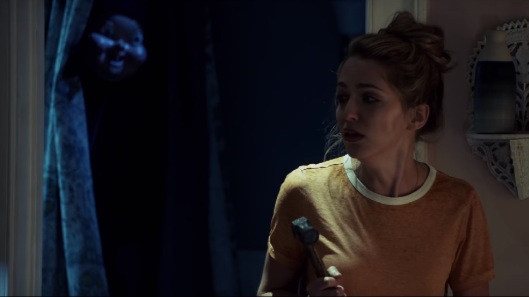 For a movie that was first announced a decade ago, Happy Death Day does at least feel a little fresher than most teen-based horror movies, and it’s blend of terror, college campus hijinks and waspish humour is at least attractive to watch, and the script’s determination to do something a little bit different with its familiar premise is to be applauded, but it’s still a movie that doesn’t follow its own agenda or guidelines too convincingly, as evidenced by the killer popping up wherever they’re needed to on any given day, and leading to the assumption that they’re aware of the time loop Tree is experiencing, and that they’re somehow ahead of it (and especially when they still manage to turn up inside a locked room). Of course, the script also takes the opportunity to show Tree the error of her rude, dismissive ways, and the time loop acts as a learning curve, which at least gives Tree a chance to grow as a character, even if it’s not really necessary.

Tree is played with a great deal of tenacity and conviction by Rothe, and as she’s in every scene, it’s fortunate that she’s as good as she is, as in the wrong hands, Tree could have been a character that the audience might not have had any sympathy for. As it is, Rothe is a terrific heroine, caustic and unlikeable to begin with (“Who takes their date to Subway? Besides, it’s not like you have a footlong”), to responsible and more able to deal with the problems in her life, such as her deteriorating relationship with her father. Sadly, the rest of the characters don’t fare so well, with Broussard’s potential new boyfriend coming across as too fresh-faced and bland to attract Tree in the first place, and Matthews’ obnoxious sorority leader, Danielle, giving new meaning to the phrase, “stupid is as stupid does (and says)”. Landon, who’s yet to make a completely successful horror movie after the entertainingly flawed Scout’s Guide to the Zombie Apocalypse (2015) and the unnecessary Paranormal Activity: The Marked Ones (2014), shows an understanding of the various masked killer tropes the script relies on, and how to use them to the movie’s best advantage, but he’s not quite able to combat the many non sequiturs that crop up throughout. And if the killer’s look is too much like Ghostface from the Scream franchise – but with a baby’s visage instead – it doesn’t actually hurt the movie, but it’s not an intrinsically scary image either.

Rating: 6/10 – a pleasant enough diversion in these days of overly lacklustre horror movies, Happy Death Day isn’t as bad as it sounds from its tagline, but it’s also not as good as it’s premise may promise; Rothe is a great choice for Tree, and Landon stages the murder scenes with a great deal of visual flair, but ultimately, and despite a good effort from all concerned, it still can’t overcome the familiarity of the material to make it stand too far out from the crowd. 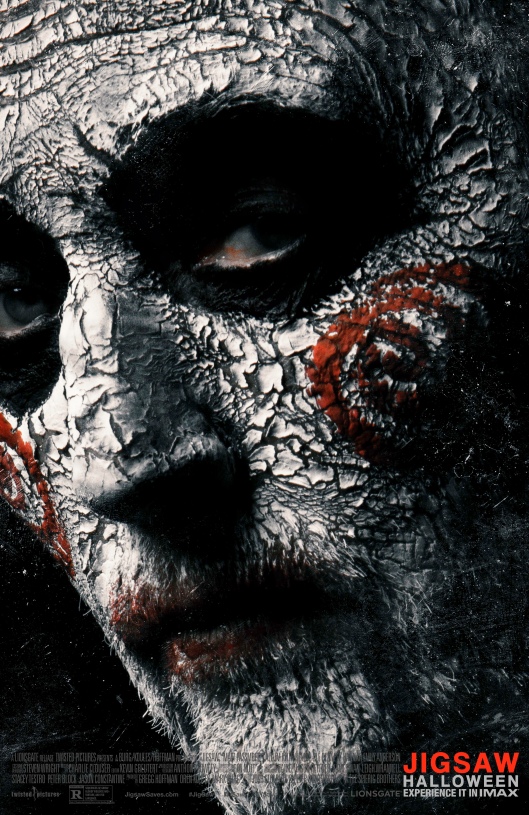 John Kramer (Bell), the notorious serial killer known as Jigsaw, and who never actually killed anyone, has been dead for ten years. But now, bodies are popping up all over the city that are clearly the work of Kramer – or is it a copycat? Despite mounting evidence that Kramer is still alive, the police, in the form of Detective Halloran (Rennie) and his partner, Detective Hunt (Bennett), as well as coroner Logan Nelson (Passmore) and his assistant, Eleanor Bonneville (Anderson) aren’t so convinced. After all, Kramer’s body underwent an autopsy – as seen in Saw IV (2007) – so it can’t be him. Soon, as the body count rises, and the finger of suspicion points toward Detective Halloran, Logan and Eleanor find themselves in a race against time to find the remaining “contestants” in Jigsaw’s latest game before they are forced to kill themselves or each other in order to survive and be set free.

By the time of Saw 3D (2010), the most recent in the series, the Saw franchise had become so convoluted that any attempt at following a logical narrative was almost as difficult as working out Pi to the thousandth degree. There were so many acolytes doing Kramer’s work, before, during and after his demise, that it was impossible to keep track of where they all fitted in to the overall narrative. And now we have an eighth movie that presents us with another acolyte doing Kramer’s work, and without spoiling anything for anyone, we have Kramer himself putting another unlucky group of sinners through the usual series of tests that will see them sliced, diced, maimed, tortured, and eventually killed. The how of it all is quite cleverly done, but this is the best thing about a seventh sequel that, like its immediate predecessors, seeks to play games with the series’ timeline, and cause its audience to spend much of the movie’s running time scratching their heads in confusion. 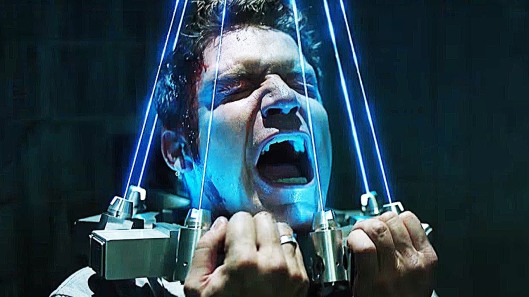 In tone, this is reminiscent of the first two movies, the ones that introduced and then expanded Kramer’s back story in such a way that you could still keep track of things before they got all gnarly and as tangled as the barbed wire in the Twisted Pictures logo. Newbies the Spierig Brothers have certainly got the look and feel of the series down pat, and while they recreate the grim and gloomy texture that infuses the series as a whole with due care and attention, in doing so, what they haven’t done (and neither has the script by Josh Stolberg and Pete Goldfinger) is to make this entry stand out from all the rest. The traps are all present and correct, and they are as fiendishly constructed as you’d expect, but somewhere along the way, the production has failed to make them as visually effective, or their outcomes as disturbing as in previous entries. In some ways, the traps in Jigsaw are the least gruesome in the series as a whole, and in that sense, the danger for the characters is lessened, making their ordeal less effective. It also doesn’t help that the confessions that Jigsaw/Kramer is looking for aren’t that effective either, with only one of them having any kind of impact.

If the intention was to kick start a new run of Saw movies, with new characters and new scenarios that could be sent off in a variety of new directions, then Jigsaw isn’t the movie to herald in that new run. Tied too much to the previous entries, and lacking in anything appreciably new that might energise proceedings, what we’re left with is a movie that feels more comfortable as a cinematic version of a Greatest Hits album (look out for one character’s “hobby room”, and the return of Billy the Puppet), and which harks back to the series’ early days almost in tribute of them. In the end, the movie feels tired and unnecessary, adding little to the canon and providing a bland experience for fans and newcomers alike. The performances are serviceable, though Bell is good value as always, and the twists and turns of the narrative aren’t as compelling or persuasive as they’ve been in the past. Kramer is fond of saying that “the truth will set you free”. Well here, the truth is that Lionsgate, who didn’t want to make another Saw movie until they heard a pitch they thought was worthwhile, should have waited a little bit longer.

Rating: 5/10 – lacking tension in its trap sequences, and with even fewer characters to connect with than usual, Jigsaw is a stunted attempt at rebuilding the Saw franchise; Bell’s presence helps, but it’s not enough to rescue a movie that trades on former glories while being too respectful of them, and which doesn’t try to establish its own identity.