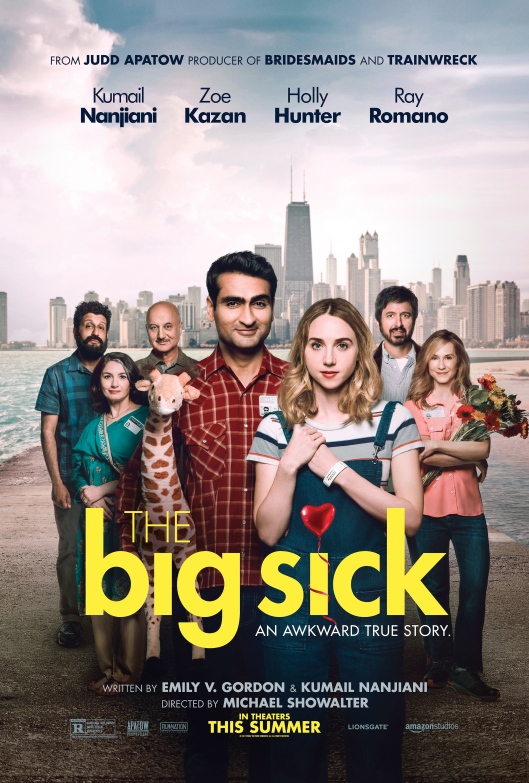 Any budding romance can have its pitfalls and obstacles that need to be overcome, but the romance between Kumail Nanjiani, an aspiring stand-up comedian, and Emily V. Gordon, an aspiring therapist, is surely one that can’t be typical. How many other fledgling romances can lay claim to the fact that things were put in doubt by a combination of Kumail’s cultural background (being of Pakistani origin he’s expected to commit to an arranged marriage), and Emily’s falling ill and having to be put into a medically induced coma in order to save her life? If there’s another couple out there who have been through the same situation and come out the other side and still gotten married, and if they thought their experiences might be the stuff of a terrific small-scale movie, then they’re too late: Kumail and Emily have beaten them to it.

Based on the early days of their relationship, The Big Sick charts how Kumail (Nanjiani) and Emily (Kazan) first meet at one of his stand-up gigs. He’s still finding his feet on the comedy circuit in Chicago, while Emily is a post-grad student about to begin her own career. They take to each other immediately, but though they enjoy each other’s company, and Kumail in particular is smitten, Emily is more guarded. She doesn’t really see herself being in a relationship just yet, and when she finds a cigar box full of pictures of the women Kumail’s mother has tried to set him up with, it’s the excuse she needs to end things, especially as he reveals that he hasn’t told his parents about her. Later that same night, Kumail receives a call from one of Emily’s friends telling him that Emily has been admitted to hospital. When he gets there, he finds that she has a serious infection in her lungs and that she needs to be put into a coma in order that she can be properly treated. Kumail signs the consent form, and then contacts Emily’s parents, Beth (Hunter) and Terry (Romano)… 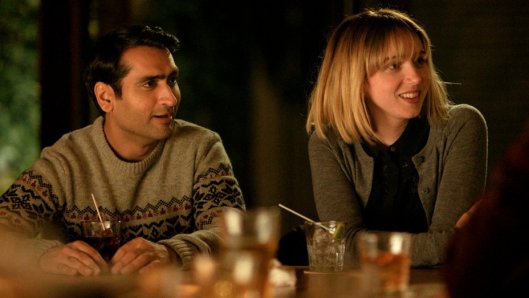 In telling the story of their romance, and the problems that nearly kept them apart forever, Nanjiani and Gordon – happily wed since 2007 – have constructed a screenplay that relates their story in a simple, heartfelt way that is both appealing and funny, but which also reflects the drama inherent in both Kumail’s family and cultural background, and Emily’s illness. Any movie that attempts to mix comedy, drama and romance and give each element its due, is a brave movie, but this is so successfully structured and played out that it almost looks easy (which it couldn’t have been; could it?). Part of the appeal of the movie is that it never tries to be anything more than a faithful reflection of the two main characters’ experiences and feelings at the time, while raising pertinent observations about relationships, Pakistani culture, the persistence of love in times of adversity, and finding our place in the world. And even if only ten per cent of what we see in the movie is what actually happened, it doesn’t matter: there’s an emotional truth here that trumps all other considerations.

It is instructive though just how confident Nanjiani and Gordon are in their material, with the comedy elements (Kumail’s relationship with his family, adversarial but still borne out of affection) and the dramatic elements (Emily’s life-threatening illness, and the obvious distance between her parents) blending effectively and with a surety that is constantly effective, with director Michael Showalter displaying a fine sense of timing and allowing the story and the characters the room to breathe. The movie is somewhat slow in places, but it’s a deliberate approach that allows the audience to get to know the characters and to become involved in what’s happening to them. This makes the main characters sympathetic and believable, from Kumail’s reluctance to tell his parents about Emily, to Beth’s passionate outbursts when she feels a wrong has been committed (as when Kumail is heckled by an audience member who tells him to “go back to ISIS”), and even to some of the supporting characters such as Chris (Braunohler), Kumail’s roommate and “the worst” of the stand-up comics that he hangs out with (their collective opinion). 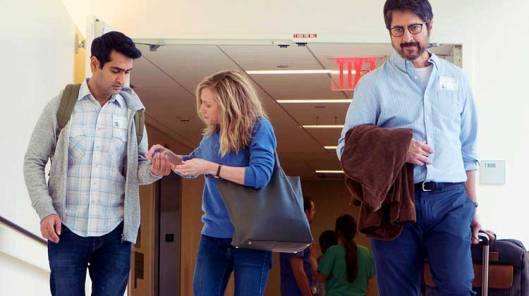 In relation to the issues surrounding arranged marriages, the script makes some solid observations about the cultural need to maintain traditions when weighed against modern conceptions of love and marriage, and how these two opposing approaches can affect even the strongest of family relationships, but Nanjiani is clever in that he doesn’t make this the dramatic focus of the movie, even though he does address the issues cogently and with a great deal of sympathy for both sides. Humour is the order of the day, and the scene where he comes home to challenge his being kicked out of the family, and uses pre-written cards to do so, is a perfect example of the script knowing how to balance both comedy and drama. It’s laugh-out-loud funny and entirely serious in its intentions all at the same time. Likewise the scenes between Kumail and Beth and Terry at the hospital, largely dramatic in tone but with a wistful quality to them that helps anchor the emotional undercurrents. The scenes at the hospital show Beth and Terry reacting differently to each new development, and there’s not one false note about their reactions, so well written are they and so believable as individuals.

The performances are terrific, though Hunter does stand out as Beth, her portrayal not based on Emily’s real-life mother at all, and actually all the better for it, allowing Hunter to freewheel through certain scenes with a sincerity and a credibility that is hugely impressive. As himself, Nanjiani is much like his portrayals of characters in other movies, and you get the sense that the script is making it easier for him to play the role than if he were playing someone else. That said, he understands the material in ways that another actor wouldn’t have, and so his casting is a wise choice, even though he’s not really an actor. This and a couple of minor quibbles aside – why does Kumail keep the photos of the women his mother has tried to set him up with is never explained (making it seem like an awkward McGuffin), and Terry making a confession to Kumail never quite feels credible – the movie is a genuine pleasure to watch, and often has more going on than in two or three other movies altogether. You’ll be glad you decided to spend time with Kumail and Emily, and you’ll root for them while you do, so engaging are they, and so relatable as well.

Rating: 9/10 – beautifully written and beautifully realised, The Big Sick is the best romantic comedy drama of 2017, a delightful, insightful, and incisive movie that proves there’s still life in the old rom-com-dram yet; with knowing performances, astute direction, a pleasing visual sense courtesy of cinematographer Brian Burgoyne, and an impressive sense of its own simplicity, this is one of the most enjoyable movies in some time, and a worthy tribute to Nanjiani and Gordon’s love for each other.