James Mitchum (Mooney) is in his mid-twenties and has never strayed beyond the immediate confines of the underground bunker that he and his parents, Ted (Hamill) and April (Adams), live in due to the outside air being poisonous (though the cause is left unexplained). James has grown up watching a TV show called Brigsby Bear Adventures, which concerns a bear called Brigsby and the adventures he has in space as he tries to stop the evil Sunsnatcher from destroying all the light in the universe. Brigsby is aided by two twins, the Smile Sisters, who are roughly eight or nine. James knows the show inside out, and for good reason: it’s the only TV show he’s ever seen. But James’ life is turned upside down when police arrive at the bunker, and it’s revealed that James was stolen as a baby from his real parents, Greg (Walsh) and Louise Pope (Watkins).

United with his birth parents, and his younger sister, Aubrey (Simpkins), James finds much that is puzzling about this new world he’s been thrust into, and his obvious lack of social skills don’t help, but the one thing he has that he can rely on, the one thing that continues to make sense to him, is Brigsby Bear. But when he’s informed that Ted created the character and made all the shows himself, instead of trying to put this information into the context of his “abducted” life and its structure (the video tapes of the show that Ted made were as much educational as they were entertainment), James decides to make a Brigsby Bear movie, and use it as a way of completing Brigsby’s story. James’s reasoning is plain: if Ted can no longer finish the story, who better than James? With the aid of some of Aubrey’s school friends, including budding movie maker Spencer (Lendeborg Jr), and admirer Meredith (Demie), and police detective Vogel (Kinnear) (who helps with “access” to some of the show’s original props), James sets about making his dream come true. 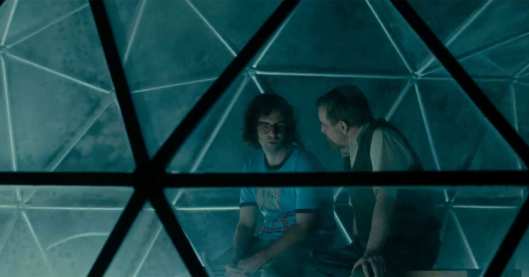 If you see a movie that’s more sincere and more touching than Brigsby Bear in 2017, then that movie definitely needs to be brought to everyone’s attention, because this movie is both those things and much, much more. A feelgood movie that takes a truly original notion and explores it with unexpected depth and compassion, Brigsby Bear is a terrific, wonderfully constructed movie that touches on universal themes of acceptance and individuality and belonging, and does so in such a well thought out and affecting way that it’s hard not to find yourself smiling to yourself without always realising it while the movie is playing. Conceived and written by its star, Kyle Mooney, and his friend, Kevin Costello, James’s own adventure is one that is both touching and heartfelt, and which pulls the viewer along by the sheer exuberance that emanates from the screenplay and its use of the characters involved. James isn’t a socially awkward teenager in an adult’s body, he’s a socially awkward adult with a teenager’s mindset. But his commitment to Brigsby Bear isn’t a sign of a child whose emotional growth has been stunted by prolonged exposure to the show. Instead it provides clear evidence that James has absorbed many of the life lessons that Ted has tried to teach him; all he has to do now is recognise the situations in which he should use them (it’s an interesting subtext – that Ted has actually done a good job of being a father to James despite the circumstances – that, sadly, isn’t followed up).

That he gets so many things wrong becomes understandable, but Mooney and Costello’s screenplay, ably realised by McCary, also shows how James develops as a person, and how he learns from his mistakes. Mooney is superb as James, always seeming as if he’s just on the verge of working out some diffuse mystery, and always in a way that keeps everyone around him slightly on tenterhooks, unsure of where his enthusiasm for Brigsby will take him. It leads to some wonderfully charming moments that emphasise and highlight the joys of extremely low budget movie making, and how the making of this particular movie serves as a final chapter for the first part of James’s life; it’s his way of putting the past behind him and beginning to move on. And as he reconciles his past with his future, more lessons are learned and James’s growth as an individual helps him to forge the new relationships that will allow him to rebuild his life.

Directed with confidence, and with a focus on the emotional core of the screenplay by McCary (making his feature debut), the movie is quirky, and infused with a sweet-natured humour that allows for easy laughs throughout, but not at the expense of the sentimental nature of the drama. Some viewers may find that the movie isn’t “dark” enough, as if the initial set up should lead on to darker material, but that idea is quickly undermined (and dismissed) when Vogel asks James if the Mitchums ever “touched” him. James confirms this, saying it happened often, and demonstrates by shaking Vogel’s hand. This isn’t a movie where any physical or psychological damage to its lead character is either mandatory or relevant – there are plenty of other movies where those aspects are addressed. Instead it’s a movie that in its own compassionate way, avoids those issues but only because it’s not the story it wants to tell. (And even when James is sent to a psychiatric hospital, there’s still the opportunity for laughs rather than misery.)

With great supporting turns from the likes of Kinnear (as a cop with thespian leanings), Danes (as a domineering therapist), and Hamill (as the not quite so evil abductor that you’d expect), the movie is also careful to portray the Pope family dynamic as one of protracted confusion mixed with dwindling hope that James will ever be fully integrated into that dynamic. The script provides answers to many of the questions it raises (including that one), but is shrewd enough to keep James’s future an enigma that even he may never solve. This ambiguity allows the movie to end on a high note that is actually more poignant and more apt when considering where James’s story began, and which is in keeping entirely with its off-kilter nature. Few movies this year are likely to be as engaging or as captivating as this one, and that’s because this movie is a true one of a kind.

Rating: 9/10 – with its fully rounded central character, offbeat yet creative scenario, and effortlessly endearing atmosphere, Brigsby Bear is like a surprise present you weren’t expecting – at all; smart, funny, and genuine, it’s a movie that eschews moralising for optimism, and does so in such a warm, convivial manner that it’s entirely too hard to resist.