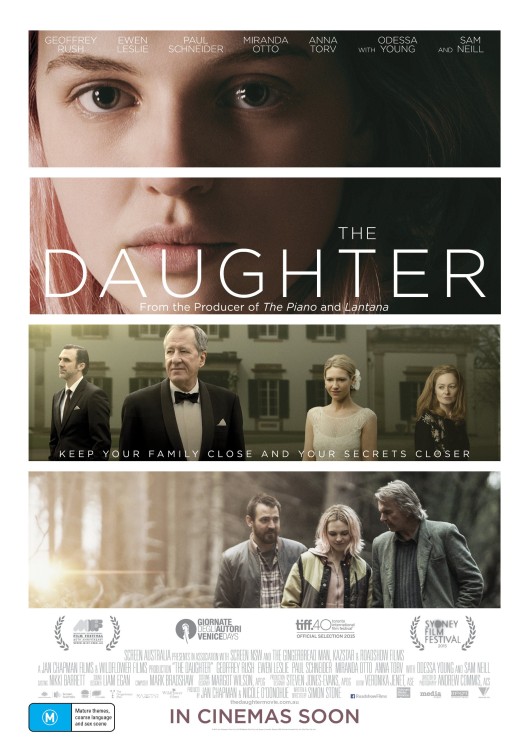 When he learns that his father, Henry (Rush) is remarrying, Christian Nielsen (Schneider) comes home to Australia from the US for the ceremony. He’s been away since his mother died, and in the meantime he’s developed a problem with alcohol, one that is jeopardising his current relationship with Grace (Mak), even though he’s been sober for three months. Henry is marrying his housekeeper, Anna (Torv), a situation that Christian is initially happy with. But it’s when he reconnects with his oldest friend, Oliver (Leslie), that he realises that this isn’t the first time his father has had a relationship with a housekeeper. Back when his mother was still alive, there was another, Charlotte (Otto), whom Oliver is married to. They have a teenage daughter, Hedvig (Young). When Christian starts putting two and two together, this coupled with Grace splitting up with him, prompts him to start drinking again. Tensions between Christian and his father threaten to mar the wedding, but it’s not until the evening reception that  Christian, fuelled by alcohol, reveals what he knows to an unsuspecting Oliver…

Another tale of secrets and lies, The Daughter tells exactly the story you think it’s telling, and does so in a melancholy, mournful way that says everything it’s relating is inevitable. From the moment when Christian mentions that he’s three months’ sober, to Grace telling him via video link that she’ll fly out to join him, writer-director Simon Stone’s movie adaptation of his own theatre adaptation of Henrik Ibsen’s The Wild Duck, proceeds carefully and assuredly along a path toward an inexorable and tragic fate that will sweep up and engulf all its main characters. Christian is the central protagonist, adrift in his own life and seeking some kind of permanence in order to make himself feel good, but too beset by his own personal demons to be able to. By contrast, Oliver is settled and content, even if he has just lost his job at the local sawmill (a sawmill owned by Henry in a subplot that goes undeveloped). Happily married and with a daughter he’s immensely proud of, Oliver is Christian’s opposite. At first it’s easy to sympathise with Christian, but as the movie progresses, it’s easy to see that his anger at his father’s actions is merely a cover for the jealousy he feels at Oliver’s happy home life.

Though the story has its antecedents in Ibsen’s The Wild Duck, here Stone is unable to avoid providing viewers with a number of scenes that are more melodramatic than successful. There’s plenty of exposition too, some of which is dragged out across several scenes, while in contrast, Henry and Anna are sidelined by a succession of short exhanges where he refuses to talk to her. Thankfully, the performances come to the rescue, with both Leslie and Young on superb form. As Oliver and Hedwig, they make the pair’s father-daughter relationship both convincing and natural, while Young by herself makes Hedvig’s confusion over the fracturing of her family and the subsequent fallout heartrending to watch. Stalwarts Rush and Neill do what they’re required to do (which isn’t too much), Otto fleshes out her character to the extent that there’s more to Charlotte than her dialogue allows, and Schneider does equally well in revealing the depths of Christian’s insecurities and resentments. Stone’s direction wavers from time to time, and the movie’s flow is often curtailed; he also adopts a time distortion effect where dialogue is spoken over scenes that occur some moments after. It’s an interesting idea, but like much else in the script, sadly doesn’t have the impact that may have been intended.

Rating: 6/10 – intermittently absorbing, and plagued by scenes that come and go without being developed further or followed up, it’s left to the performances to keep viewers of The Daughter interested; that said, Andrew Commis’ cinematography is terrific compensation, but overall this is a movie that should be filed under missed opportunity.