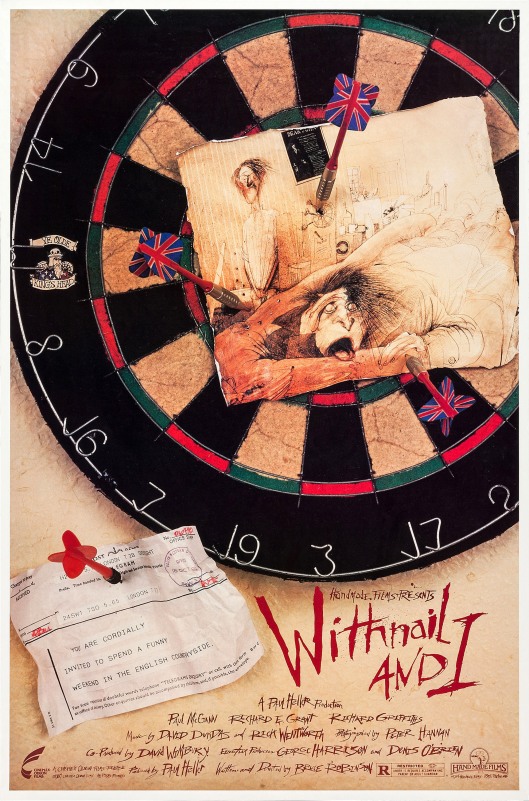 Almost the very definition of a cult movie, Withnail & I is a movie with a number of virtues, and one that remains as consistently entertaining today as it did when it was first released (if you haven’t tried the drinking game yet, then shame on you). It’s fitting then that the poster for the movie should be as iconic as the movie itself, and thanks to the involvement of the artist Ralph Steadman, that’s exactly what it is. It speaks to a very specific kind of British mentality, the kind that operates independently of any other cultural affectation or belief system. It’s an amazing mix of image and graphics, and of the time period the movie takes place in, referencing a bygone era represented by two distinct elements: a classic British dartboard, and a telegram. Both of these elements have a role to play in the movie, but while their importance on screen is negligible, their inclusion and their placement within the poster help to consolidate the tone and feel of the movie itself. It’s the perfect accompaniment – or appetiser, perhaps – for Bruce Robinson’s tale of ribaldry and conspicuous excess.

The dartboard hints at so much of what the movie is about: the passing of an age, an age in which Withnail and I, in their own way, are becoming just as obsolete. Despite the vivid colours and the depth that goes with them, look closer and you’ll find that the board is cracked and weathered. It’s a clever indication that what can be seen at first glance can be deceptive, that there’s an acknowledgement of past glories, of better times gone by, but also that a decisive moment has passed. The same is true of the arrows holding Steadman’s unflattering drawing of the pair to the board. With their Union Jack feathers, the arrows also represent the end of a bygone era. They’re ineluctably tied to the board, a last reminder that things were better – or at least they seemed that way. The drawing itself, featuring Steadman’s trademark artistic style and wildly expressive depiction of Withnail (while I stands diffidently in the background), perfectly expresses the different natures of the two characters. And if you look closely you can see another dartboard in the background with three darts in it, and below that another telegram pinned by another dart.

The telegram is another symbol of a bygone era, a form of communication that has been surpassed by newer technologies; its time is almost up (as is Withnail’s dream of becoming a star). The fact that it contains an invitation to “spend a funny weekend in the English countryside” is the one aspect that strays from the poster’s overall theme, and is the nearest it has to a promotional tagline. But it still somehow fits the tone of the poster (and the movie), that slightly off-centre British attitude that has its own rules and conventions. The whole thing is rounded off by Steadman’s unique graphic style with words, the credits assembled in fractured lines one atop the other but still in deference to the title itself. Boldly highlighted in red, the title is like a challenge: do you dare watch Withnail and I? And perhaps more importantly, if you do, will you like what you find?