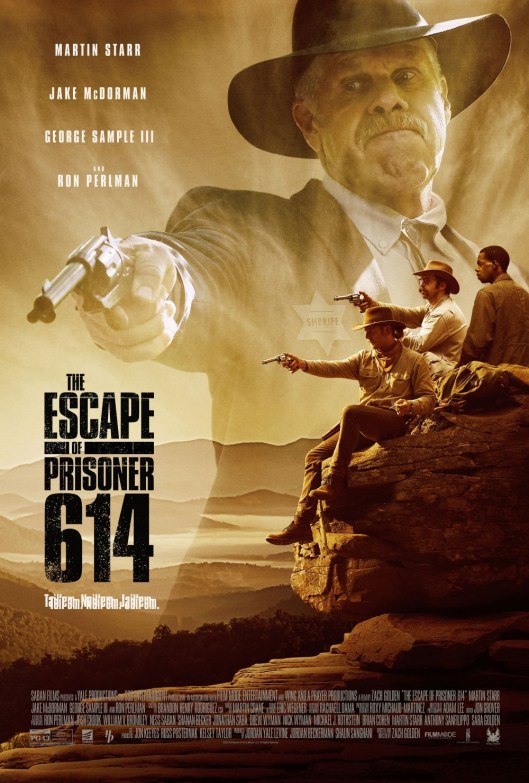 In the quiet southern town of Shandaken, crime is at an all-time low. Going back seven years, the town’s two deputies, Jim Doyle (Starr) and Thurman Hayford (McDorman), have what might be considered an envious record: in all that time they haven’t made one single arrest. However, this doesn’t sit well with the sheriff (Perlman). With their record giving him the opportunity to get rid of them, Jim and Thurman find themselves suddenly unemployed. But fate throws them a lifeline in the form of a convict, Prisoner 614 (Semple III), who has escaped from a nearby prison. Determined to capture the escapee, and use his capture to get their jobs back, the two ex-deputies set off into the nearby mountains to track him down. This proves easier than expected but getting back proves less so. Soon the trio are lost, and while the sheriff waits on their return, Jim and Thurman discover that Prisoner 614 was wrongly imprisoned. Aware that if they bring him back, the sheriff is likely to find a way of ensuring that Prisoner 614 doesn’t make it back to the prison – at all – they come up with a plan to keep him safe…

When we first meet Jim and Thurman they’re playing cops and robbers, chasing each other throught the woods and using prop guns to shoot at each other. These are grown men, but with one foot in a lingering childhood that keeps them from engaging fully with the world around them. They’re inept, foolish, naïve, and irredeemably good-natured. They’re also immensely likeable, and thanks to Zach Golden’s sincere and affectionate screenplay, the kind of gentle, unassuming heroes we can all get behind and root for. They have modest ambitions, and modest hopes. All of this goes to make The Escape of Prisoner 614 the kind of guilty pleasure that comes along every so often, and which allows the viewer to just enjoy a movie for its own sake. Golden’s debut is pleasantly free of subtext or hidden meanings, and it skirts around wider issues such as institutional racism because they’re not part of the story Golden wants to tell. This is a carefree, slightly unbelievable tale that succeeds thanks to a surfeit of unforced charm, and terrific performances. It may feel slight, and even under-developed at times, but it has an often wicked sense of humour, and it doesn’t set out to be more than it is. In and of itself, it’s a movie that’s as good-natured as its two main characters.

As the hapless pair, Starr and McDorman are on fine form, exploiting their characters’ naïveté with disarmingly skillful precision. Starr is terrific as the cautious Doyle, his deadpan delivery and pessimistic demeanour offering several understated yet hilarious moments, while McDorman portrays Hayford as the more generally upbeat and positive half of the duo, complementing Starr’s performance with aplomb. As the bully-boy sheriff, Perlman takes a role that could have been reduced to caricature and adds comic layers to the part that are both unexpected and enjoyable. It’s all played out in the kind of non-specific yet generic small town milieu that allows for quirky goings-on and equally quirky characters to come and go – James’ diner waitress, Marla, is a particular treat – while treating the main storyline with equal affection. It’s not for everyone, and some viewers may find the slightness of Golden’s tale to be unsatisfactory, but sometimes a movie that doesn’t concern itself with frills or unnecessary layers is all the better for being so purposely restrictive. And this is one such movie.

Rating: 8/10 – a knowingly arch comedy of errors, The Escape of Prisoner 614 is a gentle, low-key movie that has modest ambitions, and a confidence that augurs well for Golden’s next feature; bolstered by Adam Lee’s textured cinematography, and a naturalistic feel that underpins the deliberately whimsical nature of the material, this is a small-scale winner that’s both delightful and entertaining.