Following the death of his wife, retired thief Brian Reader (Caine) is approached by a young man named Basil (Cox) with the idea of robbing the Hatton Garden Safe Deposit. Tempted by the opportunity of one last, and hugely impressive, score, Brian enlists the help of some of his fellow thieves: Terry Perkins (Broadbent), Danny Jones (Winstone), Kenny Collins (Courtenay), and Carl Wood (Whitehouse). The robbery is planned for the Easter weekend of 2015; with the vault closed for four days they’ll have more than enough time to break into the vault and raid all the deposit boxes. Brian instructs Basil to look out for any diamonds that are marked FL for flawless, as these will net them the most money. On the second night, Basil (who has procured keys to the building) is late in arriving, and Carl panics and walks away. With Brian also having removed himself from the plan, it’s left to Terry, Danny and Basil to break into the vault and steal whatever they can find, and Kenny to be the lookout. But once they’ve made their getaway, dividing the spoils between them proves to be even more difficult than stealing it all in the first place… 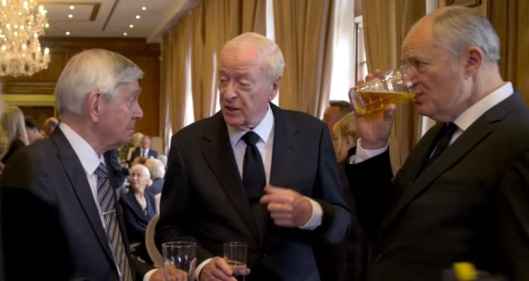 As well as being the largest ever “burglary in English legal history”, the Hatton Garden Job as it became known, was notorious for being carried out by four old men in their sixties and seventies. It’s this aspect of the robbery that King of Thieves focuses on, and often in great, if repetitive, detail. It’s a movie that’s as much about the actual event as it is the men behind it and their reasons for doing it. Brian is a recent widower who finds himself without a purpose in life, living in a big house and unprepared for the silence that comes with being alone. He’s a sad, tragic figure, using the robbery to regain some semblance of his youthful virility, but who is also wise enough to recognise his limitations. It’s only when his partners’ duplicity threatens his permanent retirement, that he resumes the mantle of king of thieves, and attempts to settle matters. Caine shows us both the pride and the frailty in the man, and how being infamous when you’re in your prime means less and less as you get older. 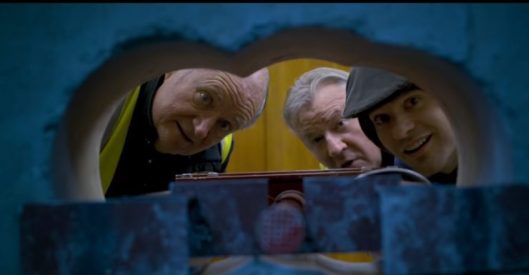 It’s a harsh lesson (and message) for Brian to learn, and as the oldest of the group, the pack mentality that develops after the robbery, with Terry, Danny and Kenny trying to outmanoeuvre each other to keep a bigger slice of the pie, means Brian’s ousting becomes almost inevitable. Old age and its demerits are reflected in the characters’ speech and conversations, which always return to their various ailments, from Carl’s Crohns disease to Kenny’s hearing difficulties, and so on. In adopting this approach to the material, director James Marsh and screenwriter Joe Penhall offer an examination of feeling young while being old that is more melancholy than affirmative, but the seasoned cast, who, Broadbent aside, are all playing to type, aren’t given too much to work with. While the movie has some trenchant things to say about its characters, they’re often let down by the dialogue which becomes increasingly profane (and without adding anything of value to proceedings), and a sense that it’s all a little bit too perfunctory in the way they and events are being presented. Marsh makes the robbery itself a minor miracle of rapid editing, but elsewhere the movie lacks some much needed pace and energy.

Rating: 6/10 – the cast is the main draw here, alongside an acknowledgment that being old doesn’t mean being obsolete, but King of Thieves treats its subject matter with a lack of verve and vitality that ultimately detracts from its effectiveness; a bland visual approach doesn’t help either, and there are too many occasions where repetition is the order of the day, making this another “true story” that fails to fully impress.