Performance artist Freddy (Sebastián Silva) has two current ambitions: to complete a short movie that sees him explore what it is to be a baby (and with himself portraying one), and to have a baby with his best friend, Polly (Wiig). But Freddy’s sperm count is too low, which rules him out as a donor. This leaves Freddy’s partner, Mo (Adebimpe), as a potential substitute. At first, Mo is supportive and willing to take over from Freddy, but when it comes to making his first “contribution”, he finds he can’t do it. Meanwhile, Freddy decides to expand the content of his movie to include other people, including Mo, Polly, and his assistant, Wendy (Shawkat). Having secured a possible spot at a local art gallery, Freddy is keen to complete the project as quickly as he can, but as well as the issue of Polly’s pregnancy – which Mo eventually has a change of heart about – one of his neighbours, a mentally disturbed man who calls himself The Bishop (Cathey), is the source of anti-social behaviour that has a greater and greater effect on Freddy, and Polly as well…

Sometimes, when discussing a movie, it’s hard to do so when that movie trundles along quite happily in one direction – and for most of the running time – and then suddenly it changes tack, and heads off into the unknown or the unexpected. This is the case with Nasty Baby, writer/director Sebastián Silva’s ode to creativity and creation, and a movie that is for the most part quite amiable (if a little under-nourished in the drama department), but which becomes a different movie entirely in its last twenty minutes. Nasty Baby was (somewhat famously) meant to premiere at the 2014 Toronto International Film Festival, but the festival organisers didn’t like the ending and suggested Silva change it. Silva stuck to his guns, but so too did the organisers, and it wasn’t until the 2015 Sundance Film Festival that the movie was first shown to audiences. Watching the movie now, you can understand Toronto’s reluctance, and also Silva’s determination. The ending of the movie is so tonally and dramatically separated from what’s gone before that it’s hard to work out if Silva intended it all along, or it was designed to provide an ending where there wasn’t one before. (Hmmmm…) 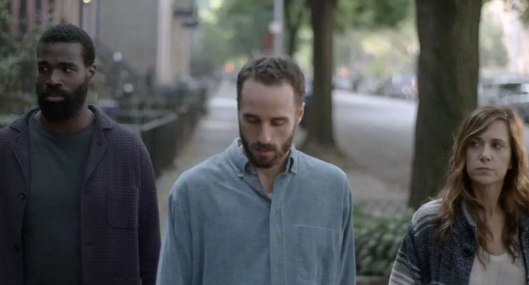 On the other hand, the ending is much more dramatic than anything else that’s gone before. The rest of the movie is engaging enough, even though not much happens, and it features good performances from Wiig and Adebimpe, but there’s a tremendous sense of waiting – waiting for Silva to pick up the pace, and waiting for Silva to plot a through line that doesn’t feel forced or lacking in focus. The surrogacy issue is left largely unexplored, as well as Polly’s need for a baby, and Freddy’s performance art work lacks a reason for being also, making this a movie where things are set up for no discernible reason, and it jumps from scene to scene without many of them having an impact. Even Cathey’s mentally disturbed neighbour, who provides the movie’s only real source of conflict, soon becomes tiresome due to the repetitive nature of his harrassment. A trip to visit Mo’s family further underlines the waywardness of Silva’s screenplay, with an awkward dinner table conversation about the suitability of a black gay man being the sperm donor for a straight white woman, and how this would affect the child. It’s awkward not because the subject matter is obviously contentious, but because, like so many other aspects of the movie, Silva hasn’t quite worked out what he’s trying to say.

Rating: 6/10 – though on the face of it, Nasty Baby has the look and feel of an accomplished indie movie, the truth is that it stumbles way too often for comfort, and keeps its characters at a distance from the viewer; the aforementioned performances go a long way toward making up for the movie’s shortfalls, and Silva does at least make good use of his Fort Greene, Brooklyn locations, but overall this is a movie that lacks the cohesiveness needed to make it work effectively.