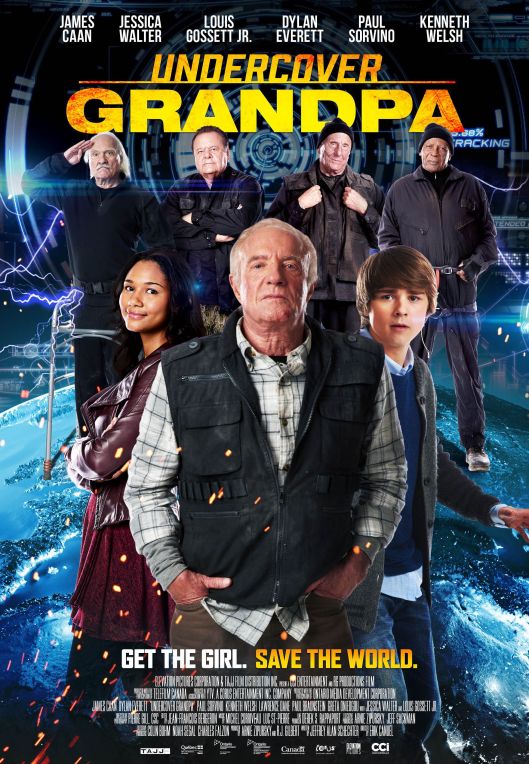 Jake Bouchard (Everett) is a typical teenager: he’s easily embarrassed and/or annoyed by his parents, he has one really close friend, Wendell (Bostick), he does well enough at school, he wants to go out with Angie (Onieogou), the cool girl he’s known since they were four – oh, and he has a grandfather (Caan) who’s ex-military and so paranoid he sees enemy agents at every turn. On the very night Jake has finally arranged a date with Angie, his grandfather comes to dinner and he has to meet up with her later. Before that can happen, though, Angie disappears after letting Jake know that her car has broken down. Jake discovers that his grandfather is pretty good at finding clues that point to who might have abducted her, but just as they’re getting somewhere, they themselves are intercepted by a secret intelligence agency that grandpa Lou used to work for. Having been told to stay “retired” by his former boss (Walter), Lou elects instead to enlist the help of four of his old comrades in arms – the Devil’s Scum – to help him and Jake find Angie and the people who abducted her…

When a movie has a title like Undercover Grandpa, it’s likely that the average viewer won’t be expecting much from it at all, and may be watching it because a) they’re a big James Caan fan, b) they’re intrigued by the cross-generational approach of the material, c) they have an hour and a half to kill, or d) all of the above. This is definitely one of those movies that you didn’t know had been made until you came across it buried deep within a streaming service, or back in the good old days of the video store, when it might even have been a featured new release (for a week). It also fits into the “Whatever happened to…” niche that a lot of actors fall into as they get older and the really good roles start drying up. For James Caan this is one of those movies, another in a long, recent line of low-budget, barely seen movies that have kept him (at least) continually employed. But it is a throwaway movie, once seen, barely remembered, and only memorable as the movie where Kenneth Welch’s character is seen traversing a river bed in an old diving suit and navigating with a Zimmer frame. (That really is it, and despite the script’s good intentions.)

Is it sad to see Caan reduced to such shenanigans at the ripe old age of seventy-seven? Well, it is and it isn’t. It is because Caan clearly isn’t as mobile as he used to be (his stuntman is possibly in this movie more than he is), and it isn’t because it does appear that Caan is having fun. It’s not his best performance by a tollgate mile, and there are times when some of the dialogue defeats him entirely, but even when beset by low production values and a less than impressive script, Caan is still a good enough reason to give a movie a chance. But a chance is all you’ll need to identify this movie’s shortcomings, what with its pantomime villain (Braunstein), teen-oriented tweeness, stolid by-the-numbers approach, and it’s elderly, sub-par A-Team dynamic. The jokes are as old as the combined ages of the Devil’s Scum, Canuel’s direction shows why he’s more often employed in television, and the whole thing is as tired as the aging cast look. That movies like this one get made every year by the bucket load is a given, but the bigger question is, why do stars of the calibre of Caan agree to make them?

Rating: 4/10 – on a superficial, leave-your-brain-at-the-door kind of level, Undercover Grandpa offers few surprises but does provide the unsuspecting viewer with a degree of innocuous pleasure; one to watch then if you’re in the mood for something completely undemanding, but otherwise a movie with a likeable basic concept but very little else.