In a small Australian town, widowed father Al (Leslie) and his son, Fin (Oxenbould), are both struggling to deal with the recent death of Fin’s mother, Rose (Dillon). Al is a teacher at the local college who has sought comfort in a string of short-term physical relationships, and who is currently sleeping with one of his students, Shelley (Lowe). Fin has retreated into a fantasy world populated by butterflies and happy memories of his mother. Both in their own way are looking for a love to replace the one they’ve lost, and when retired burlesque dancer, Evelyn (George), opens a flower shop nearby, they soon fall under her spell. Fin becomes possessive of her, while Al believes a new, more long-lasting relationship is possible – once he can extricate himself from the persistent attentions of Shelley. But father and son soon find themselves at loggerheads over their attraction for Evelyn, and their antagonism towards each other escalates, bringing up painful memories of Rose’s passing, and at a time when Evelyn has her own problems to deal with, problems that she has kept from both of them…

Movies that deal with grief and longing are often melancholic and hard to watch. Seeing other people’s misery acted out in front of us isn’t something that’s likely to attract large audiences or much in the way of mainstream appeal. But there’s definitely a niche market for such movies, and any feature that tries to examine how we deal with the pain and grief of losing a close relative is to be applauded for venturing into territory that most people want to avoid. But though The Butterfly Tree is one of those less fearful movies, it’s also one that struggles to find a consistent identity as it tells its oh-so-sad story. It has an uneven mix of styles, from its poignant magical realist opening as Fin imagines himself surrounded and then transported by thousands of butterflies, to the arch comedy of Shelley’s blinkered pursuit of an unwilling Al, to the romantic possibilities created by both Al and Fin’s super-fast infatuations with Evelyn, and to the wistful, philosophical mood it aims for when Evelyn wittingly or unwittingly (you decide) helps with Fin’s infatuation. And that’s without the drama of Al and Fin going to war against each other, a war that’s sparked by teenage jealousy and cinema’s usual approach of ensuring that two characters avoid talking to each other. 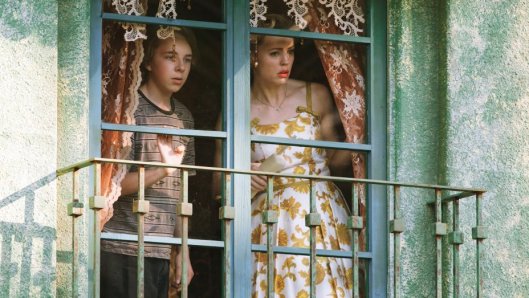 With all these elements vying for our attention, writer/director Priscilla Cameron (making her feature debut) has trouble keeping them all in line, and it’s not long before you begin to wonder if perhaps this is a movie that has been improvised from start to finish, and not least with the dialogue, which often sounds awkward, and awkwardly phrased. The movie is at least often luminous to look at, thanks to Jason Hargreaves’ careful use of colour saturated photography, and Charlie Shelley’s evocative production design, which makes Evelyn’s heady, over-stylised home, itself a riot of competing colours and textures and sights, a visual delight. But all in all, this is a movie that seems content to flirt with many of the heavy-hitting themes it seeks to explore, and which signposts many of the twists and turns in its narrative, making it not just predictable, but laboured as well. There are good performances from George and Oxenbould, though Leslie is hampered by the script’s insistence that Al should not be able to confront Fin over his behaviour at any point (until it’s dramatically too late). And by the time Evelyn’s main problem comes to the fore and adds further gravitas to everything else, it’s a diversion that, like much else in the movie, fails to have any appreciable impact.

Rating: 5/10 – though clearly made with the best of intentions, The Butterfly Tree falls short of achieving its goals thanks to Cameron’s lack of focus, and a script that doesn’t want its characters to suffer too much; shot through with a hazy, quirky sensibility that hints at any meaning being up for grabs, it’s a movie that unfortunately frustrates more often than it impresses.