For Walter Meyers (Glover), it’s the first Xmas since the death of his wife, Grace. Determined to have the same traditional family get together that they always have, Walter invites his children and their partners and their children, and his sister-in-law, May (Mo’Nique), to spend the five days before Xmas with him. It should be a happy time for everyone, but his two daughters, Cheryl (Elise) and Rachel (Union) don’t get on, his eldest son, Christian (Malco), is wrapped up in running for Congress, and his youngest son, Evan (Usher), has an addiction to painkillers that no one is aware of. Animosities old and new soon take centre stage as Walter tries to rein in his family’s inability to get along for just five short days, while Cheryl’s husband, Lonnie (Smoove), does more than flirt with checkout girl, Jasmine (Hilson), and Christian’s involvement with a local planning issue threatens the homeless shelter that Grace and Walter supported their entire marriage. And that’s without Walter’s own plans to sell the family home, something he hasn’t mentioned to anyone…

Ah, the dysfunctional family. What would movie makers do without it, and especially at Xmas? (They’d probably have to invent it,) In writer/director David E. Talbert’s ode to the the highs and lows of Yuletide family arrangements, the Meyers family behave just like most large families, with some members still clinging on to long past upsets and disappointments as if they were freshly minted, with yet others in unfulfilling or strained relationships, and yet others trying to make sense of the lives they’re leading (while all of them are wondering where it all went wrong). None of the scenarios and storylines in Talbert’s screenplay, however, are particularly original, and even if you haven’t seen that many movies with a similar set up, there’s little here that will come as a surprise, except perhaps for Talbert’s laidback approach to the material, and how the search for easy laughs hampers the more dramatic elements (such is Talbert’s reliance on the tried and tested that Glover even gets to repeat his Lethal Weapon catchphrase, “I’m too old for this shit”). Audiences may feel the same way, as each sub-plot and scenario is worked through in the same formulaic way that dozens if not hundreds of other, similar movies have adopted before. 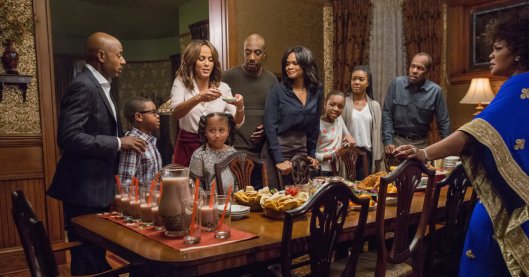 It’s a relief then, that the movie has the seasoned cast that it has, because without them, much of Talbert’s laboured screenplay would have stopped the movie from having any kind of impact at all. Glover is the patient patriarch who should really be banging some heads together, while Union and Smoove grab the lion’s share of the viewer’s attention by playing, respectively, the sister who’s still looking for a direction in her life, and the self-absorbed ex-basketball player whose head is easily turned by a pretty, young admirer. Stock characters they may be, but at least the cast know how to play them for maximum effect, even if that proves somewhat contradictory in practice. As a result, the movie is pleasant to watch, but in an undemanding fashion that allows the viewer to just sit back and let the movie do all the work, while the comedy is successful enough to warrant a few hearty guffaws here and there. Ultimately, it’s held together by good will and perseverance, and by a determination to do the best that it can, even if the odds are against it. And so, it’s like a lot of Xmas movies that feature a dysfunctional family: basically entertaining, but you wouldn’t want to repeat the experience.

Rating: 5/10 – with little to recommend it beyond the obvious, Almost Christmas is competent enough to hold the casual viewer’s interest – and not exactly a chore to watch – but it does what it does without attempting to be anything more effective; one to watch on a quiet Xmas Eve afternoon perhaps, but not one that is likely to be adopted as an annual Yuletide treat.