In the weeks leading up to Xmas, several friends and relatives who are all connected to each other find themselves dealing with love in (almost) all its various forms. David (Grant) is the newly elected Prime Minister who finds himself attracted to Natalie (McCutcheon), a junior member of the staff at 10 Downing Street. Mark (Lincoln) is the best friend of Peter (Ejiofor), who has just married Juliet (Knightley) – who Mark is secretly in love with. Writer Jamie (Firth), after being cheated on by his girlfriend, heads to Provence to write his latest novel, and falls in love with his housekeeper, Aurélia (Moniz). David’s sister, Karen (Thompson), begins to suspect that her husband, Harry (Rickman), is having an affair with someone at his work. Meanwhile, one of his other employees, Sarah (Linney), has feelings for her colleague, Karl (Santoro), but doesn’t know how to broach them. Daniel (Neeson), a friend of Karen’s, is a recent widower who’s stepson Sam (Brodie-Sangster) reveals his own life for a girl at his school. John (Freeman) and Judy (Page) are body doubles working on a movie, while Colin (Marshall) dreams of visiting the U.S. where he believes his being British will attract lots of women. 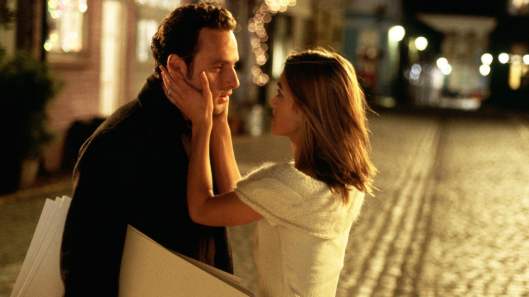 The glue that binds all these characters together, even more so than writer/director Richard Curtis’s excessive generosity in connecting them in the first place, is the character of Billy Mack (Nighy), an aging singer making a comeback with a cover version of The Troggs’ Love Is All Around, retitled Christmas Is All Around. Whenever the movie is spending time with the other characters, Billy is often there in the background, his cheesy monstrosity of a Xmas record and louche behaviour a much needed antidote to the surfeit of sentimentality and saccharine romanticism that peppers the narrative from start to finish. Even the less “happy” storylines – Harry and Karen, Sarah and Karl, Juliet and Mark – are bittersweet entries that are layered with poignancy and hopefulness. But that’s the point of the movie: it’s a positive message of love for everyone. Even if a marriage founders for a moment (Harry and Karen), or love is a case of wrong place, wrong time (Mark and Juliet), or even if it never gets off the ground at all (Sarah and Karl), all the clichés are in place: love will find a way, love is all you need, love conquers all… That Curtis holds it all together and still manages to make it work despite all the plot contrivances and rampant wish fulfillment that threaten to derail it several times over, is a testament to his confidence in the material.

Of course, he’s aided by an accomplished ensemble cast who rise to their individual challenges with gusto and no small amount of charm. Grant’s dance routine, Rickman’s hangdog expressions, Nighy’s inappropriate smirking – all of these character beats and more help to make the movie a feast of feelgood moments that linger like treasured memories long after it’s ended. Curtis may have laid on the romance with a trowel (sometimes it’s like being battered over the head with a dozen red roses), but this is a very, very funny movie with endlessly quotable lines (Colin: “Stateside I am Prince William without the weird family”), visual gags aplenty, and the ability to spring a number of clever narrative sleights of hand when you’re least expecting them. It’s an appealing, but unsophisticated slice of romantic fairy tale excess that’s bolstered by pin-sharp humour, terrific performances, and a refreshing awareness that it all takes place in a fantasy-based “reality” of Curtis’s devising (where else would the US President get such a public dressing down for his behaviour?). Fifteen years on, it remains a perennial favourite at Xmas, and despite an initial lack of enthusiasm on the part of critics, a movie that has transcended any criticism – deserved or otherwise – to become one of those rare movies that can be enjoyed over and over again, and which never seems to grow old or stale with repeated viewings.

Rating: 8/10 – a movie that tells nine separate stories and which does justice to all of them, Love Actually is a moving, thoughtful, and emotional look at love itself and what it means for a variety of people in a variety of situations and circumstances (though notably, not anyone who’s LGBT); comic and romantic in equal measure, it’s a movie you can fall in love with easily and unreservedly (and any movie that contains Jeanne Moreau in a blink-and-you’ll-miss-it cameo has got to be getting things more right than wrong).