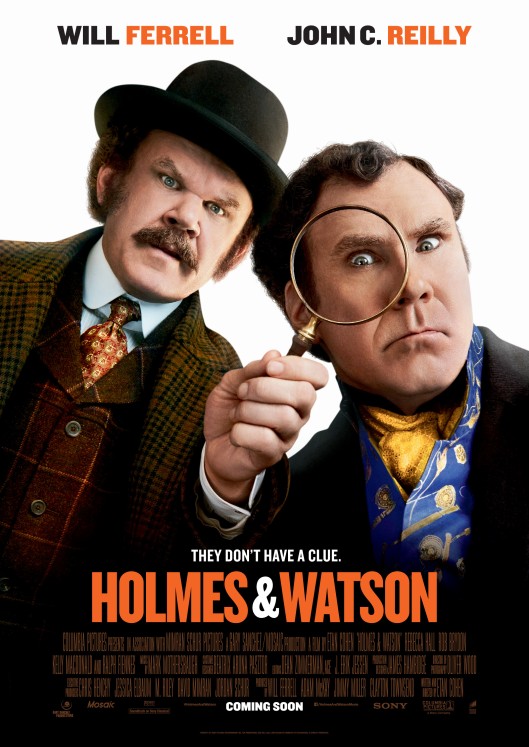 A score of 3.9 on IMDb. A score of 25 on Metacritic. A 6% rating on Rotten Tomatoes. All beg the question: is Holmes & Watson really that bad? The answer is unequivocal: yes, it is.

It’s not just bad, it’s abysmal. It’s sluggish, dull, uninspired, monotonous, vapid, unimaginative, feeble, pointless, moronic, inane, stupid, tedious, stale, lacklustre, incompetent, and worst of all for a supposed comedy, almost entirely laugh free. It’s a clear contender for worst movie of the year, something of a feat when 2018 has already given us the likes of Lake Placid: Legacy, The Nun, Mile 22, Supercon, and Proud Mary. This is a movie that is so awful you have to wonder if anyone was paying attention while they were making it, a piece of dreadful nonsense about a plot to kill Queen Victoria (Ferris) by Professor Moriarty (Fiennes) that is so lazy its climax takes place on RMS Titanic (Victoria was long dead by the time it launched in 1912). Writer/director Cohen brings absolutely nothing new to the idea of a Sherlock Holmes parody, and wastes the time and efforts of his very talented cast. A perfect example of Cohen’s approach is the moment when Holmes smears Watson in horse shit; a better metaphor for the movie as a whole couldn’t be more fitting. 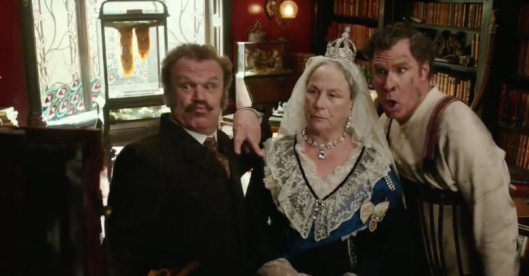 But more concerning perhaps than all of this is the performance of Will Ferrell. Someone really needs to take him to one side and tell him that his manic style of comic acting is wearing perilously thin these days. Shouting isn’t inherently funny, but Ferrell does this a lot, and when he isn’t shouting, he’s behaving in such an arch, mannered fashion that he just looks and sounds like he’s trying too hard, as if someone had told him that if he didn’t behave that way then the material – and his performance – wouldn’t be as effective. As a result, it’s hard to tell if Ferrell is afraid to try something different, or he’s just being lazy. Either way, he’s the movie’s weakest link, and he drags it down every time he opens his mouth or offers us another of his “hilarious” facial expressions (see above). Maybe it’s time for Ferrell to broaden his horizons and make more serious fare, and remind audiences that beneath his default man-child persona, there’s an actor with a greater range than portrayals such as Chazz Michael Michaels in Blades of Glory (2007) and James in Get Hard (2015) would seem to indicate. It’s not as if he hasn’t proved this already, with Stranger Than Fiction (2006) and Everything Must Go (2010), movies that showed he could do subtle and restrained, and find the truth in a character, rather than their inner idiot.

In the meantime we’re stuck with Holmes & Watson, a movie that sucks hard at the teat of comedy and comes away with the merest of dribbles to sustain its inept storyline, dire dialogue, and crass characterisations (you really have to feel for the likes of Fiennes and Hall, forced to standby as their credibility as serious actors is stripped from them with each passing moment they’re on screen). Cohen – whose first outing as a writer/director was the less than appropriately titled short, My Wife Is Retarded (2007) – displays a singular lack of ability behind the camera, cluttering up the frame, placing the camera where it has the least impact, and utilising close ups for dramatic purposes that only he can explain. Scenes connect haphazardly and awkwardly with each other, and Holmes’ leaps of intuition make about as much sense as why this farrago was made in the first place. This is the second movie of 2018 to feature John C. Reilly and Steve Coogan in its cast, and it’s instructive that this is markedly inferior to their other outing, the sublime Stan & Ollie. Now that really is a funny movie (take note, Will Ferrell).

Rating: 3/10 – saved from a 2/10 rating by virtue of its production design alone, Holmes & Watson is a terrible, dispiriting way to see out the year, and a firm reminder that Ferrell’s “schtick” is well past its sell-by date; when a “comedy” with such a talented cast is released straight to cinemas without the benefit of critics’ screenings beforehand then the warning signs couldn’t be more obvious, and the timing of its release near Xmas is entirely apt: it’s an enormous turkey.